What to expect when fishing the West Coast

Driving or flying to the West Coast and going fishing, it’s a highlight every time I go, and I’ve been going to the saltwater to catch salmon, cod, and halibut for nearly two decades. The ocean is a magnificent playground, where the fish are big, the water’s bigger, and there is a real opportunity to catch the fish of a lifetime. There is also the likelihood to bring home enough fish to feed you, and your family, through an entire winter. It’s hugely rewarding. 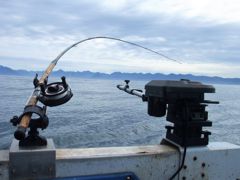 West coast fishing is a highlight of any trip.

For many people salmon are king when fishing the salt. They fight hard and can be caught in good numbers. There are two salmon species that attract the attention of recreation and commercial fishermen alike, and they are the chinook, and coho salmon. When the runs are on, it can be mayhem, catching one fish after another. Coho are mint silver, lending to their name silvers, as they are often referred to by our neighbours in Alaska. Come the waning months of summer, extra large coho salmon, often referred to as northerns, show up on the scene and loads of 10 to 15 pound fish become quite common. Coho bite hard, jump high, and are excellent served filleted on the bbq when brought home for dinner. They are most definitely a fish worth catching. 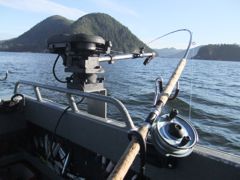 When the runs are on, it can be mayhem, catching one fish after another.

The chinook salmon is a different fish all together. They are much bigger than coho and come by all kinds of handles. Anglers refer to them as springs, chinook, tyee when they’re over 30 pounds, and kings if you catch them in Alaska. They are all the same critter, though, and when you are on chinook runs, 15 to 25 pound fish are the norm. They do get much bigger. I’ve caught them to 38 pounds and friends have caught fish in the forties, while every year some lucky fisherman or fisherwoman tags a mega chinook that will push 50 pounds. Chinook are often filleted, much like coho, but given their much larger size, people quite regularly steak, can, or smoke their chinooks. Candied salmon made from a freshly caught chinook is a highly prized delicacy and one worth trying if you get the chance. 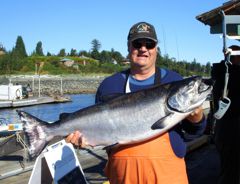 Every year some lucky fisherman or fisherwoman tags a mega chinook

The rest of this piece is dedicated to bottom fish, which rightfully constitute the largest portion of my ocean catches. Halibut, that most delicious of flatfish, can grow huge. Whereas a mega salmon may push the scales past 30 pounds, that’s just scratching the size potential of halibut. My wife Melanie and I have caught a number of halibut that would push 100 lbs, and lots, and I mean lots in the 40 to 70 pound range. Halibut are critters of the bottom, and hanging a tough bait, like a chunk of salmon belly off a spreader bar near the top edge of a drop off is a good way to catch them. Their firm white meat is great when lightly fried or put in soups, or terrific when coated in batter and deep fried for fish and chips. 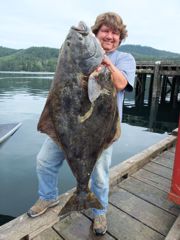 Halibut, that most delicious of flatfish, can grow huge.

The ling cod is the unsung hero of the ocean. They are super easy to catch, and taste unbelievably good. They get huge! We’ve caught ling cod up to 70 pounds, but 10 to 20 pound fish are far more common. And it is the smaller fish you really want to catch. They are by far the tastiest and make outstanding fish and chips. A 10 to 15 pound lingcod is extraordinary table fare and well worth the energy to catch them. When it comes to catching lingcod, fish rocky structure, like underwater humps, and get ready for super hard hits. Fight them hard and get them quickly up and out of their rocky homes. Otherwise these fish will dive into those protective rocky crevices after the hook is set and it becomes quite a task to get them out. 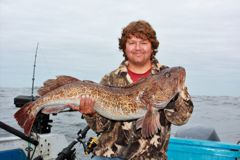 The ling cod is the unsung hero of the ocean.

Be it red snapper, brown bombers, china bass, these fish are among several fish that are all grouped together under the handle rockfish, and as a whole, they do not get anywhere near the size of the ling cod or halibut, but they should not be overlooked. A 4 or 5 pound rockfish will provide some of the sweetest, most succulent meat the ocean has to offer. These are typically a one meal fish, but what a great meal it will be. Fried, deep fried, barbecued, they all work for these smaller tasty fish of the coast. 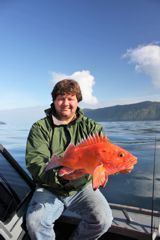 A 4 or 5 pound rockfish will provide some of the sweetest, most succulent meat the ocean has to offer.

These are the fish you can expect to catch while angling on the west coast, be it on your own or with a guide. There are a few things that will keep your fish its very best for the table with the most important being to bleed your fish the moment you catch and decide on keeping it. Clearing the tissue of blood by bleeding it ensures pure white meet in the case of bottom fish, and pink to orange to red meat in the case of salmon. Having no blood in the tissue will mean your fish will last longer and taste better. One other thing that really improves the shelf life of your catch is to vacuum seal your fillets. This prevents air from accessing the meat and can increase the shelf life of your catch by 3, 4, or even 5 times. 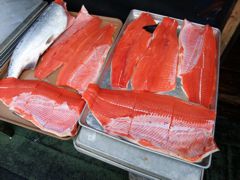 One other thing that really improves the shelf life of your catch is to vacuum seal your fillets.

Make a plan to experience the coast for yourself, and revel in the adventure. The bounty you can catch from the ocean is substantial, and the west coast experiences you gain, will in itself, be extraordinary.