Muskellunge, or muskies as most refer to them, have been on my bucket list for as long as I can recall. As a young kid growing up in southern Ontario I remember staring in awe at the taxidermy mounts in the sporting shops, gas stations and rural inns; many were full-body mounts showing the sheer immensity of these apex predators, while others were merely head mounts, jaws agape, featuring the musky’s enormous toothy smile. I’m not aware of any other fish species being displayed this way and, while the practice has long since fallen out of favour, back in the day it was popular.

At the time I was restricted to bobber and worm fishing in the local river, but I was determined that one day I would land a muskie of my own. Unfortunately, we moved west before I was old enough to fish the big waters muskies call home, but I never forgot my musky dream. 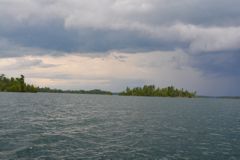 I never forgot my dream to fish the big waters muskies call home.

For the past 13 years a friend of mine has been taking his annual family vacation in the Lake of the Woods region, near the Manitoba/Ontario border. He’s made it a personal quest to figure out muskies; his first three seasons he didn’t land a single fish, but of late he catches 15 - 20 muskies in the 38" - 50" range every year. So when he invited me and a mutual friend to fish with him for three days in August, I couldn’t say yes fast enough.

What makes muskies the legendary fish they are isn’t just their enormous size. It’s also their reputation for being extremely difficult to catch, and they’re referred to as "the fish of 10,000 casts." Many accomplished anglers have tested their skills on muskies only to return home empty-handed. In fact, even where they’re relatively plentiful, they’re far from a sure thing, often described as sulking, or being moody. 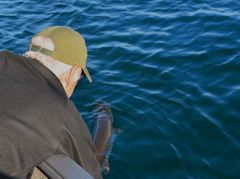 Muskies have a reputation for being extremely difficult to catch.

At first pass a musky looks like an oversized northern pike, and while they are close relatives, they’re a very different fish. A musky is your prototypical loner, a solitary, powerful predator. Some suggest he’s to fresh water what the barracuda is to salt water. And while there is some debate over the largest musky ever caught, there is no disputing the 65-pound, 58-inch leviathan landed by Ken O’Brien in Georgian Bay in 1988. Simply put, muskies can grow to enormous proportions.

A musky is your prototypical loner, a solitary, powerful predator.

Catching them, big or small, is altogether another proposition. In his early years my friend followed the standard musky playbook. The most popular tactic is to cast over and around sunken reefs, generally throwing huge bucktail spinners with cool names like "Musky Killer" or "Double Cowgirl". The theory has been to throw these large baits all day, retrieving them at high speed. Eventually, you’ll get a musky. Or so they say. Bucktail spinners are most popular in spring, after the spawn and into early summer. As summer progresses, standard musky fair switches to large stickbaits, glidebaits, paddletails and jerkbaits, with casting again the preferred presentation. It can be exhausting to throw these large lures on heavy rods all day long, but that’s been the accepted practice.

The more I’ve investigated musky tactics, searching books, magazine articles and the internet for advice, the more I’ve come to believe that there is no single best approach for targeting these big fish. That likely explains why even the most seasoned musky hunters seldom produce large fish with any consistency; as the lone wolves of the lakes and rivers they call home, where they’ll be found and how they’ll behave is highly unpredictable. 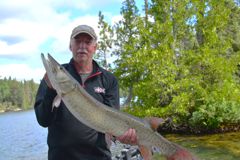 Where Muskies will be found and how they’ll behave is highly unpredictable.

I’m a musky novice, my total experience limited to three days fishing this past summer. Fortunately, my friend has been making a study of his vacation lake, fishing for a couple weeks every summer for more than a decade in an efforts to understand the whens, hows and wheres of finding muskies. He’s narrowed it down to trolling large crankbaits in 15 - 25 feet of water, most often along the shorelines of islands and over sunken humps. He’s come to believe that muskies are pelagic fish, meaning they tend to spend considerable time suspended, not resting on the bottom nor living close to shore. They’re highly mobile, and move close to structure generally only when they’re actively feeding, as that’s where they will most often find prey. He’s also convinced that muskies target ciscoes in the open open water, but has yet to fully solve that mystery. 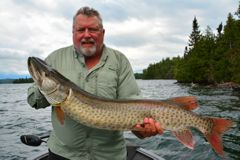 Muskies are pelagic fish, meaning they tend to spend considerable time suspended, not resting on the bottom nor living close to shore.

For three days we were in constant motion. Not once did we cast a spinner or any other lure over a shoal or along a windswept shoreline. We continuously trolled large crankbaits, including Rapala Shad Raps and Bucher Depth Raiders, usually in silver/black or perch colours. We’d be out on the water at first light, fish until 11 a.m. or noon, then get back on the water from 7 p.m. until well past dark. Not once do I recall a musky following my lure to the boat, prompting the "figure-eight" presentation so popular in musky lore and literature. What I can tell you, however, is that on three occasions over those three days our lures slammed to a violent standstill in the clear depths, and we landed three beautiful muskies in the 40" - 42" range. I quickly discovered that while muskies may not always follow the script I’d read, one thing the literature had right was how strong they are and how much disdain they have for boats and people. They fight until the bitter end, and you earn every one you get into the boat. 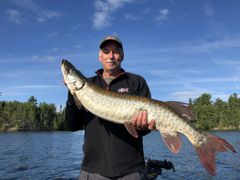 Musky are as addictive as any fish can be.

The other important lesson I took away from my first musky venture is that they’re as addictive as any fish can be. I’ve already wrangled a return invitation for next summer.