Anglers have long had a love affair with trout, seduced by their sleek beauty and the clear, cold waters they call home. Despite their popularity, however, trout can be notoriously finicky. So if you want to consistently catch them, it pays to go with the lures that have proven effective over time.

Here are the top 10 trout lures you need in your tacklebox.

More Mepps Aglia in-line spinners have been sold than any other single lure in Canada, and, the consumer is always right. The reliably rotating blade produces an alluring combination of vibration and flash, even at slow speeds, making it effective in stained or clear waters, under the cover of darkness or on the brightest days. And it’s compact and heavy enough to cast - ideal for shore - bound anglers - or troll. The Aglia comes in a wide range of sizes and colours options. Stick to the undressed version for smaller stream trout, and dressed versions when large fish are on the menu. 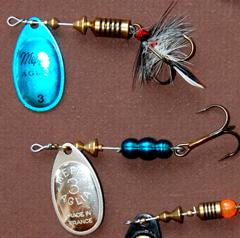 Perhaps no lure has caught as many trout as the versatile Mepps Aglia.

At 5½ inches long and weighing a hefty 3¼ ounces, the Huskie Devle is the full-meal deal, making it the go-to spoon at lake trout fishing lodges. In fact, the long-standing debate at renowned Plummer’s Arctic Lodges has been whether it’s the number one all-time lure for trophy lakers. This broad spoon has a wide, thumping wobble when trolled or allowed to free-fall, tightening as you increase the trolling speed. It comes in myriad colours, but the classic red/white remains most popular. I landed my personal best laker on a pink model, and the odds are your largest lake trout also fell for a Huskie Devle. 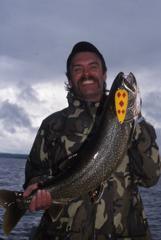 The Len Thompson 5 of Diamonds is a proven trout producer.

The other contender as the best all-time lure at Plummer’s is the T-60 Flatfish. At six inches in length, it’s the largest member of the Flatfish family. This versatile diving lure is designed to do the dirty work, veering wildly, banging off the bottom and generally wreaking irresistible havoc. Its unique shape has been copied but never equalled, a tribute to it’s adaptability - it’s as at home on large rivers and small lakes for bulls, browns and rainbows as it is on Great Bear. A wide range of sizes and colours lets you mimic natural bait while attracting marauding trout with the lure’s vibration, flash and wobble. 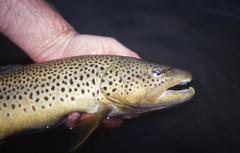 Even stream brown trout are susceptible to small spinners and spoons.

It’s tough to imagine opening anyone’s tacklebox and not seeing a handful of Len Thompson spoons. The reason is simple - they catch fish. The classic colour pattern is the yellow and red, commonly referred to as the 5 of Diamonds, though there are lots of colour combinations to choose from in sizes ranging from one to five inches. Whether you’re on the prowl for small stream trout or giant lakers, and no matter if you want to cast, troll or even jig a spoon, the Len Thompson is a go-to lure.

It’s hard to imagine that a lure as small and unobtrusive as the Panther Martin can be such a reliable producer of trout, including big trout, but history doesn’t lie. The in-line spinner’s unique through-the-blade shaft ensures a consistent spin at nearly any speed, and its relatively large blade gives it plenty of fish-attracting "thump". Many anglers think of it as a stream lure, but it’s hefty for its size, meaning it can be cast effectively on lakes and even trolled. Available in dressed and plain models, trout anglers prefer the black body with yellow spots and gold blade, and the yellow-and-red body with a silver blade.

Fish eat fish, and Lauri Rapala’s original balsa wood bait looks more like a fish than virtually any other lure on the market, explaining in large measure why it’s been so popular for so long. Of course, the realistic wounded minnow action has added considerably to it being the number one choice among countless trout anglers. It casts easily and trolls like a dream, and it can be fished on top, shallow or, with splitshot or on a three-way swivel, as deep as you need. Just select the size that best meets your target fish and pick from the many colour options. The rainbow trout, gold/black and silver/black patterns are all proven trout slayers. 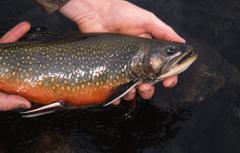 Like all members of the char family, brookies are voracious feeders and won’t hesitate to chase a spoon or crankbait pulled quickly through the water.

Nothing replicates invertebrates quite like a soft-bodied bait, and the Curly Tail is a king in this realm. Some say it looks like a worm, others a leech. Some even think it resembles a wounded baitfish. It matters little, however, because trout of all types gobble it up when given the chance. In fact, if you had to select just one bait for all trout applications, this just might be it. Simply tailor the size and colour to the waters and fish you’re targeting, thread it onto a jig head that’s appropriate for the depth, and away you go, whether casting or trolling.

The Little Cleo is the mac and cheese of trout lures, the angling comfort food you keep on hand and turn to whenever more exotic fare isn’t producing. Every experienced trout angler has a selection of Little Cleos in his or her tacklebox, and rightly so, as they’ve been reliably catching trout for more than 30 years. Wider than most spoons, and with an unusual humped back, they produce a slow, wobbling action unlike any other. And with numerous colour options and sizes, there’s a Little Cleo for every application. 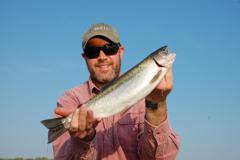 Lake rainbows can be fooled with jigs, crankbaits, spoons and spinners alike.

It was more than 100 years ago that Nova Scotia’s Williams brothers first patented the fishing spoon that would forever be known as the Williams Wabler. The original was the Wabler W50, measuring 2 5/8 inches long and weighing a half-ounce. And so it remains today after a century of catching fish, making it the company’s most popular model. Originally conceived and proven as a lake trout lure, the Wabler has since demonstrated its effectiveness on brookies, browns and rainbows. Today, the venerable spoon comes in a wide range of sizes and colours, with genuine gold and silver remaining the most popular choices.

I heard the bucktail jig once referred to as "the best lake trout lure nobody uses". And while the bucktail has undoubtedly proven itself on lakers, it’s also magical on brookies and bull trout. While the deer hair, polar bear hair or marabou that define this jig as a bucktail can be dyed every imaginable colour, basic white is the standard. A bucktail jig’s tail gently fans out when at rest, offering a trout-enticing motion, then streamlines when jigged, mimicking an escaping baitfish. Just match your jig weight to the depth you’re fishing; I won’t soon forget landing lakers by the dozen in Alberta’s Andrew Lake, jigging one-ounce bucktails in 70 feet.