For us, Christmas means family. It is a time to reconnect, to share moments, to tell stories, and be together. This past Christmas, Grammy and Grampy made the trip in from the west coast to be with our family and especially, to spend time with their grandson and granddaughter. To laugh, to listen, to play, and revel in the young. We celebrated, thankful for the holidays, and thankful for the opportunity to come together. The holidays were good, and as the turning of the calendar marked the beginning of a new year and a return to regular living, thoughts turned to outdoor adventure.

Our little girl Cedar was quick to remind us that it was time to go ice fishing, and we couldn’t agree more, especially so with warm weather forecasted. So plans were made and excitement grew because on this trip we would have a special guest; Grammy. She was staying a couple extra weeks to help out with the little ones, which is always welcomed, but on this day Grammy wanted to come ice fishing with us. This was super cool, because she had only been ice fishing once before in her life.

We arrived at the lake and found knee deep snow and only a foot of ice. The conditions told us that walking on was the best option, so we parked the truck, got out the Jetsled toboggan and filled it to capacity, along with a Cedar on top. We pulled our gear and pushed the baby stroller to the far shore, where we found a weedy point and set up shop. The first thing to go up was the 4 man Fatfish 949 ice fishing tent, which was erected and anchored in with ice screws to provide shelter. Then I pulled out the auger and got to the business of knocking down holes.

I started deeper and worked a pattern of holes shallower until I had a dozen holes to work with. I found though, that even the shallow holes were deeper than I expected. They were close to 10 feet, so I planned to cut more holes shallower still, but first I would drop down our lines so we would have lines in the water while I did the rest of the drilling. I got three of our six rods set up and placed in Jawjackers when the first one sprang to life. Melanie was quick to get on it and landed a nice trout. I reset the line and laid out the last three rods. With all six lines fishing I grabbed the auger and cut more holes in shallower water and then I moved a couple of the deeper lines over to the shallow holes. 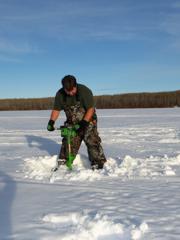 Knocking down a pattern of holes..

While this was going on Grammy was happily rolling a big snowball with Cedar, which eventually turned into a snowman, and later, a snowman family. They were motivated, and the snow conditions were absolutely terrific for rolling snowballs and making snowmen. About then I tagged a nice trout and we had another one bite that didn’t stick. The fishing was going great. 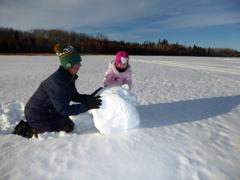 Building a snowman with Grammy.

With the sun out, the temperature warm, well above freezing, and the wind light, the whole family was having fun. I was happy. I drank in the scene, truly taking in the moment when right about then the Jawjacker nearest Grammy snapped up, then cranked over hard. Line was screaming from the reel at the bite. A sign of a good fish. "Get it!" I yelled to Grammy, who just started picking them up and putting them down, sprinting to the fully bent and bucking rod. She can really move! 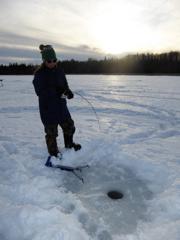 Grammy’s got a big fish on!

She picked up the rod and engaged the fish, who was having none of this, and burned out fifty, a hundred feet of line. Like a pro, Grammy steadily reeled the fish back until to kicked it back into high gear and again raced off in another line burning run, this one lasting a full ten seconds. This was a big fish! Everyone knew it. 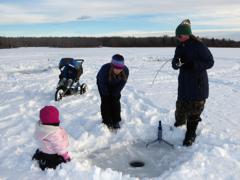 Everyone gathered around, excited to see the big trout! 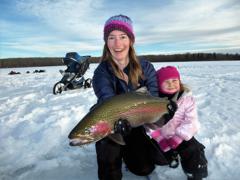 Melanie grabs on and pulls a mega trout out of the hole. Cedar’s so happy!

Grammy waited out the run and started the process of steadily bringing line back in. She survived two more heavy runs and we still hadn’t seen the fish. The battle was well over 5 minutes in. Somewhere closer to 10 minutes the big trout made a pass by the ice hole where Melanie got a good look. She looked up and her eyes were as big a saucers. She said, "That’s the biggest rainbow I’ve ever seen!" That got everyone excited, especially Cedar, who was dancing about a few feet away in anticipation of catching the big fish. A few minutes later, the big trout now tiring, was right below the ice hole and he started twisting, shaking, and turning. This is where big ones often get away. I could see flashes of silver, red, and green off the edge of the hole as it spun and kicked, trying one more time to free itself. It was anxious moments. All Grammy could do was keep steady pressure and hoped the line and the hook would hold. They did and when the fish calmed she guided a football sized head up the ice hole where Melanie got a good grip and lifted out a mega trout. 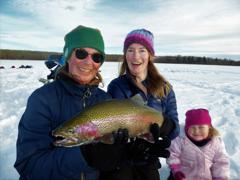 3 generations of happy girls and one huge trout! It made for a perfect day.

This magnificent rainbow was over 2 feet, and looked more steelhead than pothole trout. It was incredible. The girls, all three generations of them, gathered together and photos were taken. It was an outstanding fish, caught on an outstanding day, and made outstanding memories for us all. Way to go Grammy!