Fly Fishing in the Desert

When I was given the chance in February to escape the Polar Vortex that was causing bitter cold temperatures in Edmonton I jumped at it. Somehow the chance to spend ten days at the sister in laws house in Phoenix seemed very appealing this year. As is the case whenever I travel anywhere I always check out the fishing opportunities that may exist in the area. Years ago I remembered some pictures that famous Bow River guide Barry White had shown of flyfishing in northern Arizona. Lees Ferry was the name of the place and I remembered some spectacular scenery, red canyon walls stretching to the sky and rainbow trout, so I started investigating it in hopes of getting at least one day of fly fishing in the middle of February. 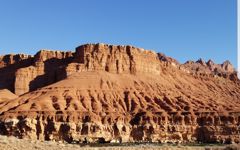 The red rock canyon walls of the Colorado River

An internet search of Lees Ferry flyfishing brought up Lees Ferry Anglers, which I remembered were the people that Barry had talked about, Wendy and Terry Gunn. They have been running this guiding service, fly shop and lodge since 1989. On their website they described a 365 days a year fishery on the Colorado River just upstream of where it goes into the Grand Canyon. I had to book at least a day, even though it is a 4 hour drive north of Phoenix. The weather looked iffy even in Arizona but as my fishing buddy Nick says, "if you don’t book it now you'll never go". I booked accommodations for Thursday and Friday nights, and a day of guided fishing for Friday. The Cliff Dwellers Lodge offers rooms and at a very affordable price of $80.00 US a night, they also have a restaurant on site so I was set.

Upon arrival in Phoenix temperatures there were lower than normal and further north at Flagstaff, which I had to go through half way to my destination, they were having large dumps of snow and the roads were in poor condition. Being from Alberta I didn't worry about it too much especially since I would be travelling mid day on Thursday. Once there if things got worse and if I got snowed in I would just have stay and fish a couple more days. 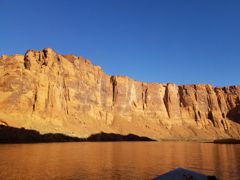 The canyon walls change colors with the angle of the sun

Lees Ferry is located at Marble Canyon Arizona, the very northern edge of the state. It gets its' name because before bridges it was the only place where the Colorado River could be crossed for hundreds of miles in either direction. The original homesteaders established a small trading post in 1920 and was given the name Cliff Dwellers because of its' proximity to the Vermillion Cliffs. The trading post was eventually expanded and the original lodge at Cliff Dwellers was built. In 1989 Lees Ferry Anglers Fly Shop and guide service was established and continues to offer a full service fly shop and guide service that are open year round 6 am to 9 pm 7 days a week. They have rental waders and boots available at the shop if you don't want to haul yours on the plane. Flies are provided by the guide and you only pay for what you lose, even though I lost a few I didn't see any on my bill. When I booked on line they had a list of guides with little bios on them, and whether they were available on your chosen date. I looked them over and chose Skip Dixon. Skip has been guiding for them for twenty years, so he would know the river inside out, but the part that made me decide on him was that he focused on teaching, both beginners and experienced. Having done some flyfishing teaching myself over the years I knew the patience that Skip would have and no matter how long you have fly fished for there is always something to learn. 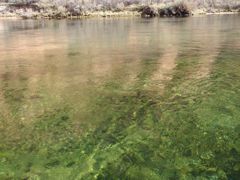 The journey to the lodge was uneventful with some snow in the ditches around Flagstaff, but as soon as I dropped back down into the desert the roads were clear and dry, and the scenery quite spectacular. Just before Marble Canyon you cross the Colorado River on the Navajo Bridge, built in 1927-28 it is an impressive 467 above the river. I had a good chuckle at the sign that stated "No jumping from the bridge". Marble Canyon has a couple of other motels and lodges and a gas station, I carried on up the road 6 miles or so and after passing an impressive display of "Balancing Rocks" softer rock protected by an umbrella of harder rock, resulting in a field of "mushroom rocks".

Upon check in at the at the lodge I was given a map to the boat launch and told to meet Skip there at 8 am the next morning and was told the dining room would be open at 6:30. It appeared that I was the only one staying at the lodge, and therefore probably the only one fishing the next day so crowding didn't seem like it was going to be a problem. I settled in my room, a basic two queen bed unit, and then went back to photograph the balancing rocks and stone houses that I saw on the way in. The restaurant opened at 6:30 as promised and to my relief I wasn't alone, another party of six, which didn't look like anglers, funny how you can tell by the wardrobes fly fishers from others, but there was no Simms, Columbia or Patagonia labels in sight so I assumed they were there for something else. The restaurant had the usual fare of burgers and steaks, my burger was perfect done to a medium rare, which you can still do in the US, and the beer was cold. I went to bed and slept well with visions of Rainbows dancing in my head. 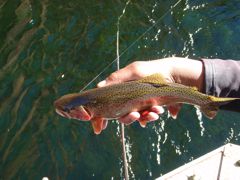 Rainbows and browns are both found in this part of the Colorado.

The morning was crisp, 17 degrees Fahrenheit crisp, after a quick stop at the restaurant to pick up the breakfast burrito and coffee I had ordered the night before I headed off for the twenty minute drive to the boat launch. Upon arrival I met my guide Skip, who had been there for a half an hour warming up the jet boat which thankfully had an enclosed cabin and heater. The Colorado River runs 15.5 miles from the outflow of the Glen Canyon Dam to the upper end of the Grand Canyon. The river is basically a large spring creek with gin clear water and at times, depending on the flows coming from the dam, can be one channel or many. We headed upstream towards the Glen Canyon Dam 7 miles away. We would stop and fish productive runs all the way up to the dam, have lunch, and then and fish our way back down to the boat launch. The river would drop about four feet over the course of the day so spots we fished from the boat on the way up, we were able to get out and wade on the way down. Truly a river that when you fish it for the first time catching fish is secondary, the scenery had me taking picture after picture on the canyon walls, which constantly changed color with the changing angle of the sun. 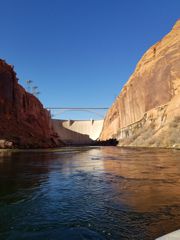 The Glen Canyon Dam provides clear cool water to this part of the Colorado River.

What was once a rainbow fishery now has a good population of both rainbows and browns that run 14 to 22 inches and larger and is managed as a trophy fishery. We fished both streamers and nymphs with success using both methods. Streamer fishing we used a size 4 or 6 bead head woolly bugger on a sinking shooting head with a piece of 4 foot piece of fluorocarbon for a leader. The streamer was cast at 45 degrees downstream and mend a couple of times. Then the fly was swam across the current with a method which I have dubbed the handshake swim. Basically with the line pinched under your finger you reach out slowly as if to shake a hand and then pull the rod back to your hip. You repeat this until the line gets straight below you, then do a knuckle length strip back to the boat, pausing occasionally, then repeat at a slightly different angle, or if you're by yourself as I was, on the other side of the boat. The nymphing was mostly sight fishing to fish that Skip would spot in the breaks in the weeds on the bottom. He not only could spot fish that half the time I couldn't see, but could tell the species and size! We used a double nymph rig with one standard nymph like a pheasant tail and one egg pattern, with the appropriate amount of split shot to get the fly down in a deceptively fast current. Good mending was the key as the fly had to be down at the level of the fish. We caught fish using both methods, landed several rainbows and broke off one fairly large brown half way back to the boat. 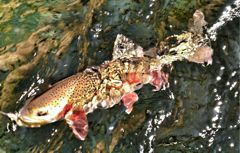 Getting the nymph at the level of the fish is critical.

There is one foot access near the boat launch for those who wants to go unguided and if you like to do it yourself jet boat rentals are also available. The Colorado at Marble Canyon is a year round fishery with some dry fly fishing mostly using midge patterns but they also have a Cicada hatch in July which could be worth checking out. It is 4 hours north of Phoenix and the same 4 hours east of Las Vegas. If you are ever in one of those two places and are in the mood for some trout fishing I would highly recommend giving the good folks at Lees Ferry Anglers a call and treat yourself to some flyfishing for trout in some of the most spectacular scenery you're going to find anywhere.