The hot July sun radiated its soothing beams on the surface of serene Pigeon Lake. This big cottage waterbody southwest of Edmonton, Alberta, sadly, has no shortage of problems. Blue-green algae blooms, creeping urbanization, user group conflicts and water quality issues. But it also has walleye. Lots and lots and lots of them. 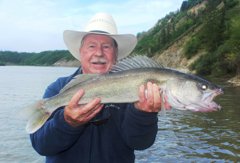 This North Saskatchewan River beauty fell for a frozen shiner minnow threaded on a chartreuse jig.

In fact Pigeon and a number of nearby lakes have undergone a walleye renaissance in recent years as the once almost-extirpated popular gamefish has made a spectacular comeback. Not through a miracle of nature or some other natural occurrence, but by the calculated efforts of Alberta Environment and Parks fisheries biologists who undertook extensive re-stocking programs then imposed strict angling regulations through the implementation of harvest tags distributed through an annual draw. The result has been nothing short of spectacular. 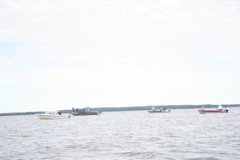 On this day my brother-in-law Russ had a couple of Class A tags (one over 50 cm.) to fill and my walleye fishing buddy Emmerson and I were at the Provincial Park boat launch to help him with it. Hey, it’s a dirty job but someone had to do it. We launched the boat and ignored the small armada already anchored at the famous provincial park drop-off and cruised down the lake to another piece of walleye holding water. When we were in the general vicinity we pointed the bow towards shore and kept our eyes on the Lowrance fish finder.

When the screen portrayed the bottom suddenly rearing up from over 20 feet to just under 8, we backed off into the deeper water and anchored up. We had found our spot. We quickly rigged our spincasters with a chartreuse jig head to which we threaded a frozen shiner minnow through the eye and brought the hook point back out the spine. Then lowered the rig to the bottom and picked it up with one rotation of the reel handle. Almost immediately the braided nylon line I had loaded on the Shakespeare reel transmitted a bump to my rod hand.

I paused as long as my jumpy nerves would allow, then set the hook with a sharp upwards movement of the medium action Shimano. Walleye on!!! The ‘eye put up a brief tussle before coming over the gunwale to be unhooked, admired and quickly released. So it went for the rest of the day. Russ had his two harvest fish in the cooler in no time and we went through four buckets of shiners. Both at the first structure and later at the provincial park drop-off when we relocated on the cruise back to the boat launch. We reckoned we must have brought over 100 fish to the boat. Since we weren’t counting, you will have to take my word for it.

This kind of action has become the rule, not the exception, on many central Alberta walleye fisheries where the harvest is strictly regulated and a vast majority of the fish caught are released. While walleye angling under these favorable conditions might sound dead simple it’s not always easy. Walleye lakes are large waterbodies so it not simply a matter of walking to the water’s edge and tossing a lure. Sure you can luck in, but more times than not it will only result in hours of frustration and defeat. Here are some helpful hints and timely suggestions to exponentially increase your walleye angling success rate.

Structure - There’s an old trout anglers saying that goes "90 per cent of the fish inhabit 10 per cent of the water." This may even be more so with walleye angling. Walleye like hanging out around submerged ridges, drop-off and rock piles similar to the sharp variance in depth we encountered on Russ’s cosmic Pigeon Lake outing. It’s what walleye anglers call "structure". 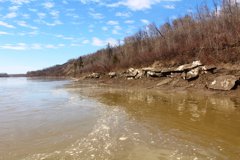 The orthodoxy - developed in the Canadian Shield lakes of Northern Ontario where bedrock dominates, is to follow rocky points into the lake to locate the structure. This unfortunately doesn’t apply to most Alberta walleye lakes which are byproducts of glaciation and the lake bottom undulations are much more random and unpredictable. One way to shorten the odds is to consult a good hydrographic map. Where there is a concentration of contour lines - either a mid-lake hump or a steep shoreline drop-off is a good place to find walleye. Finding the general location of a piece of structure is relatively simple with a map. Pinpointing the sweet spot is another matter. A sonar device that relays the state of the bottom onto a screen solves that problem. Find the depth change. Then anchor on the deep side. And if the fish are active you should be on walleye. There are also excellent walleye angling opportunities on prairie/downstream sections of many Alberta rivers. Here structure is also the secret to success. Although it’s structure of a different nature. Look for current breaks and eddies created by land slips, rocks and junction pools where tributaries enter. Then fish the "seam" where the slow and fast water intersects.

Depth - While some fish like trout, mountain whitefish and goldeye can be located in all sections of the water column, walleye are largely denizens of the deep. The likelihood of them rising to take a bait is also pretty remote. So it’s ultra-important to get your bait or lure down into the walleye zone, which is within a foot or so of the bottom. 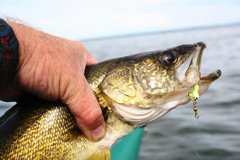 Walleye are Alberta’s most prized gamefish.

In Alberta’s highly eutrophic lakes, whose fertility is often enriched by agricultural fertilizer run-off and, unfortunately, cottage sewage, summer weed growth often makes bottom hugging angling frustrating and sometimes impossible with vegetation constantly fouling the hooks. Leave the shallow stuff to the pike anglers and back off to the deep side of the structure where sunlight penetration is restricted and the bottom vegetation tapers off.

Presentation - When it comes to most fish species, I’m a pretty committed fly fisher and find no greater pleasure than going up an intimate foothills creek flicking a dry fly on a sunny Alberta afternoon. I have caught walleye with flies like a Lefty’s Deceiver or a Zonker. But when I want to rack up big numbers, I reach for my spincaster. Trolling can be useful in locating a concentration of fish, plus there are a vast array of walleye lures and wiggly tails available on the market. When anchored over structure or fishing a current break on a big river, I find nothing beats a jig and a minnow and make no apologies to my fly fishing buddies. That said, always check the regs for bait bans before heading out to unfamiliar waters.

My go-to colour is chartreuse, but yellow, pink, orange and silver have also proven effective. Frozen shiners usually come in three sizes with a medium the preferred size because it lessens the number of bite-offs and short takes. On still water the rig is cast onto the structure or along its base and allowed to sink to the bottom. Then brought in with an ultra-slow pop and stop retrieve. Or simply lowered over the side of the boat and picked up with a turn or two of the reel from the bottom. Occasionally animating the bait with a slight lift of the rod tip. Bouncing the minnow a few times off the bottom can also induce a reluctant walleye to strike. The same technique works in flowing water situations. Either fishing the slack water of the current break and the above-mentioned seam. Then again retrieving it with a stop and go action.

Hook-set - With most gamefish the take is largely a foregone conclusion, however when angling for walleye it’s an entirely different situation. Often the take is so subtle that you are not even aware it happened. Until your jig comes back with nothing but a shiner head impaled on the hook. Even what feels like a solid take often results in a missed opportunity when the line suddenly goes slack mid-fight - indicating another missed hook-set. When walleye are taking short the only thing you can do is wait them out until the minnow is firmly between its jaws before pulling the trigger. Watching your line swim away and doing nothing about it takes real patience and fortitude. Sooner or later you have to strike and hope. Like the great Lee Wulff said about Atlantic salmon, "they are far too valuable to be caught only once". Because most Alberta walleye angling is catch-and-release these days I use only barbless hooks and change out treble hooks for singles to minimize hook damage - allowing the fish to return to the water to be caught again. I haven’t noticed any drop off on hook-ups. 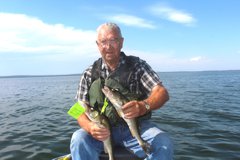 Time of-Day - I’ve caught Alberta walleye in great numbers at all times of the day, but there’s no doubt that the night time is the right time. Walleye are genetically designed as low light predators and are conditioned to begin prowling for forage fish when the sun gets off the water and the night hawks and bats come out to feed on chironomids and other lake born insects. The cool-cool-cool of the evening is prime walleye time, boat traffic is at a minimum and the angling can be sublime. All it takes to have a great time is to apply a little walleye logic and you can have a day similar to the memorable one Russ, Emmerson and I had on Pigeon.