Make Your Own Fishing Adventure

There’s something inspiring to step outside and stretch the boundaries of your fishing and outdoor experiences. I do this every year, because I love new experiences, and there are literally countless new experiences out there, waiting for you or I to say, "Yes, let’s do this!" Last year hiking the Brazeau Lake Loop and catching rainbows in Brazeau, a virtually untouched backcountry lake, was a dream of mine fulfilled. Beautiful 15 to 17 inch rainbows caught off the shores of a huge backcountry lake, set in the heart of the mountains, after a 2 day hike in, it was the sort of stuff my dreams are made of. 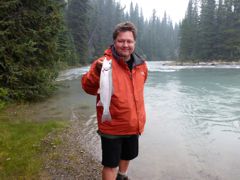 I always, have this incredible desire to travel to the BC coast and fish the big waters for salmon, cod, halibut, snapper, prawns, crabs, and more. The BC coast is my playground. It is a place that is bountiful, and awe inspiring. I’ve had 600 plus pound sunfish swim under our boat. I’ve had killer whales pop up mere meters away. I’ve seen schools of coho salmon so thick that you could think you could walk across their backs. I’ve pulled prawn traps so full that the catch from a single trap would fill an entire 5 gallon bucket. I have marvelled on those dead calm days, where miles from shore, the ocean is as flat as a pancake and life is just about as sweet as it gets. I have a vast reservoir of amazing experiences from the ocean, and I am super excited to return and show this amazing place to my growing children, who are just starting to get their sea legs. 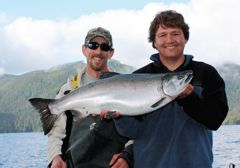 A hefty mint silver coho salmon that would make just about anybody’s day.

A fishing adventure is truly defined by you, and one of the greatest fishing adventures I ever had was the grayling adventure I took with my friend Jess, who at the time was studying genetics as they relate to Arctic Grayling populations across Alberta watersheds. And she just so happened to hire me to help her fish for grayling for an entire summer. I got to see more country in a single season, and more headwaters of more streams, than I probably did over the past 10 years combined. I found places that had bull trout, others that were full of Athabasca rainbows, and others still where elk frequented. 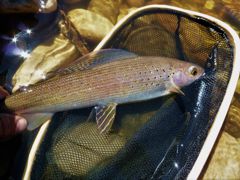 I remember this stunning pool on Wolf Creek that was deep in the heart of the boreal, surrounded by spruce, with a fallen spruce in its middle. While much of the creek was less than a few feet deep, this pool was big, in places over eight feet deep and as clear as clear can be, and in it, treasure. There were more adult grayling swimming in this one single pool than you could count. The light was just so, and I could see every detail, every colour of this amazing scene before me. It’s an image that will forever stay with me. A treasure found deep in the bush, in a place few would ever venture, but because we did, it was ours to experience.

Not all adventure means going far, or hard. There’s a sturgeon hole I occasionally walk to on the North Saskatchewan River. It has consistently produced Lake Sturgeon for my friends and I over the years, and it’s a place I revere. The sturgeon are huge by Alberta sportfish standards, they are strong, and they have this tendency to jump clear of the water in spite of their size. When a 50 plus inch fish launches itself skyward with your gear in tow, right in front of you, it’s awe inspiring. It really is that simple. Then you have to collect yourself, calm your nerves and actually engage the fish. Try to tire it out so you can get it to shore and have an up close and personal look at a fish that may just be older than you or I. 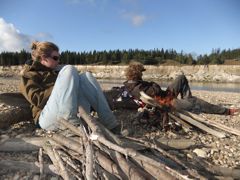 Camping out on the North Saskatchewan River, waiting for a sturgeon to bite.

Sturgeon, because they are somewhat of a rarity on the North Sask, are really special. I remember most days I'd fish for them quite vividly. I smile in amazement, thinking back to my university days. Most of the gang from our lab, the Tonn-Paszkowski lab came out to try their hand at sturgeon fishing. Catching sturgeon is a low odds game, where a fish a day is decent fishing, so I gave them the speech, and told them if one fish makes it to shore, that it would be considered a group success and they bought into it and we went fishing. Well, we hooked up on eight, and landed seven. Just crazy success for an evening’s effort and six of these people had never caught a sturgeon before. Some days are just meant to be. 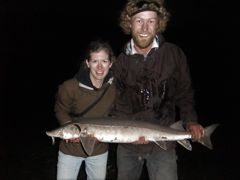 As daylight faded from the western horizon, the sturgeon bite turned on, becoming a night to remember.

Sometimes a single species of fish will undoubtedly mean I am on my way for adventure. The Athabasca Rainbow comes to mind. It seems every time I am chasing this colourful native trout of the foothills and boreal, I am in beautiful, undisturbed country, where otters and mink are common, while footprints from others are not. In my travels I’ve discovered some amazing streams that have populations of this fantastically colourful trout, and each time I find one, it makes me happy, because I admire and respect this a fish that has evolved so perfectly to suit the backcountry streams that they often call home. 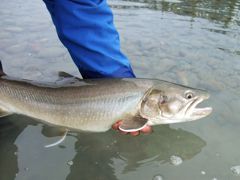 Then there is the big river bull trout. I’ve yet to catch a mega tank, but I’ve seen them, and you can bet your rod and reel that I will continue to make pilgrimages to places where the chance to catch one of these mega fish is very real. I’m talking about fish that push 3 feet long and 15 pounds. I had one such tank eat a whitefish I hooked on the Snaring. I was reeling in the fish, then the bottom moved, materializing into one gigantic bull trout and in a single gulp, my whitefish was gone, my line broke and there was nothing I could have done to stop it. I had another one follow the biggest spoon Len Thompson sells on the Athabasca River near Jasper. I watched a 3 foot plus bull chase my spoon up shallow, almost to my feet, where it turned sideways a mere rod length away, giving me an up close and personal view of one of the biggest bulls I’ve ever seen. All the while it was chasing my hook I was saying, "Bite you bugger bite," over and over again. I’ve fished the big pools of the North Sask below the dam and seen some strong evidence that mega fish liver there too, and the 28 to 30 inchers I’ve caught are more than enough motivation to keep me coming back. 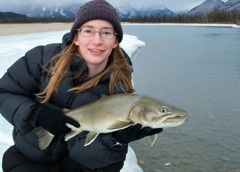 The potential for mega bull trout on the Athabasca River is very real.

I haven’t even touched on my pike, walleye, or perch adventures. Or the unbelievable lake whitefish action of Snipe, or the astounding numbers of grayling and whitefish that can be caught on the McLeod, or other such rivers for those willing to hike a few minutes. There really is unlimited adventures, and every year I make the effort to actively go out and seek them out, because these experiences enrich my soul and fill me with happy memories.