Trial and error can be a painfully slow method for improving your fly-fishing skills. The old adage "you don’t know what you don’t know" is always lurking in the background. I’ve had the benefit of fishing with some extremely knowledgeable fly-anglers, shortening my learning curve considerably. Following are a few important lessons that have helped me along the way.

Reconnaissance First, Fish Second - Before throwing your first cast, scout the section of water you’re approaching. Identify the best holding water and plan your attack for each. What’s the most logical and stealthy avenue of approach? What sections can you effectively access or cast to, and which are near impossible to reach? Watch for rising or holding fish and learn from what they reveal about their size, feeding activity and food preferences. Is there a hatch taking place that might shed some insight into your fly selection? Determine your strategy for each section before stepping into the water. If you ignore pre-game scouting, you’re bound to sacrifice success. 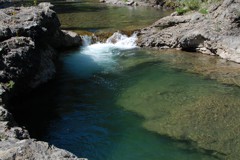 Before throwing your first cast, scout the section of water you’re approaching.

Too Much False Casting - This is a common mistake, particularly for new fly anglers. While false casting has its benefits (ensuring you’ve got the correct length of line out is the most important), excessive false casting brings a list of potential problems. Nothing says danger to a trout faster than shadow and movement. Remember, for an adult trout, natural predators are more likely to come from above than from within the water, so they’re sensitive to perceived threats over the water. On most days your line will throw some shadow and, of course, false casting makes for plenty of movement. If a trout detects either, it may result in it deciding to sulk on the bottom or move to a more concealed lie. Where and when possible, limit yourself to one false cast to confirm the correct length of line, then move straight to the presentation cast. If you must make several false casts, do so in a direction that ensures your trout won’t detect it, then turn back on line for your presentation cast. 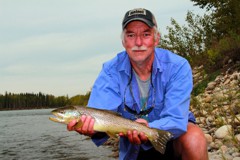 Reduce your number of false casts to minimize alerting fish to your presence.

Lining Your Trout - Related to number two above is the sin of having too much line out and landing the fly line on top of a trout. This is a sure way to put it down. If you do line a fish, the best option is to move upstream and search for another. Too much line out is the result of not measuring your need correctly, or of taking the wrong presentation angle. Fishing from directly below a trout is the most effective way to ensure a drag-free drift, but it requires much greater accuracy in estimating the proper length of line to cast. Less experienced anglers would do well to change their angle of attack. The closer you get to casting from right angles to a fish, the less likely you are to throw your line directly on top of it. However, fishing cross-stream reduces the length of your drag-free drift. A good compromise for many fishermen is to position themselves at a 45-degree angle to their target. 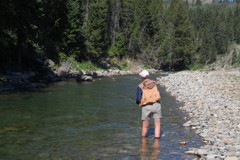 Often the best approach is to position yourself at a 45-degree angle to your target.

Too Long a Drift - Streams and rivers don’t flow in an even, steady manner. Changes in water depth, natural turns in the stream bank, and in-stream obstructions such as logs and boulders all have an impact on surface water flow. As a result, extended drag-free drifts are all but impossible in many places. Landing your fly 10 to 15 feet above a trout almost ensures your fly will drag before it reaches the fish. Three to five feet above a fish is enough in most instances, and even that can be reduced when the surface water is turbulent or you’re fishing in diminished light. One false cast designed to land below a trout, followed by a presentation cast targeted three feet above, is just about right in most situations. 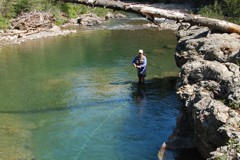 Fishing from directly below a trout is the most effective way to ensure a drag-free drift.

Know When to Move On - You’ve seen a fish rise, or notice one holding to the bottom, and you’ve cast to him unsuccessfully two or three times. Despite the fact you’ve been happy with your drift, he’s either completely ignored your fly or risen and refused. What now? Stop casting. Something’s just not right, and continuously casting the same fly the same way is unlikely to result in a hook-up. Step back and reassess the situation. Could you have spooked the fish through your movement or by casting your line on top of his lie? If so, a few minutes of rest will often get a fish back into its normal activity pattern. If that’s not the issue, consider an alternate fly. When a change is required, I’ve had more success by going to a smaller fly than by switching patterns. Understand, too, that there will be times when nothing will budge a fish. Don’t worry about it, but don’t waste your time either. Move on to the next location and start fresh. 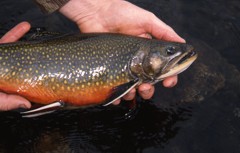 Catching more trout on a consistent basis requires as much strategy as it does technique. 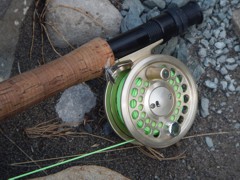 Select flies that you can see well on the water.

Missing the Strike - If you can’t see your fly on the water, you’re often going to miss seeing a trout take it, giving it time to spit the hook. For many, the answer is using flies that float high and/or are very visible on the water. Flies tied in the parachute, bastard or Wulff style all have very visible white wings, and for that reason are among the most popular patterns available. Even then, there will be times when the light or current is such that you simply lose track of your drifting fly. Resist the urge to end your drift prematurely to cast again, as more often than not when picking up the line you’ll cause a commotion on the surface just as your fly’s drifting over a fish. It’s better to let it drift long enough to ensure it’s below your target, and just hope that you’ll see or feel a fish if it strikes.