Grasshopper patterns are one of my favourite ways to fly fish for trout. Mention grasshopper fly fishing to any angler that has ever hit it right and their eyes will glaze over as they remember explosive rises to large dries. Grasshoppers while powerful jumpers and flyers do end up on the water and once there make a commotion. They are good swimmers and use their powerful hind legs to propel themselves. So once on the water they basically struggle, trying to swim or jump but usually they are just ringing the dinner bell for hungry trout. 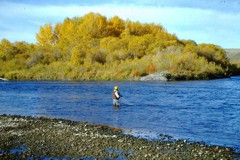 Hopper time on the Bow River

In mid-summer most trout streams will start seeing grasshoppers along the riparian zones that border streams, rivers and lakes. Some years will see huge numbers of these terrestrial insects around while others will have very few, but regardless there are usually enough of them that find their way onto the water that the trout will take notice. Hoppers become more and more active as the day warms up. Anybody who has walked a field trying to catch hoppers knows that if you get out early, when it is still cool you can catch them at will, but later in the morning once the air temperature and vegetation has warmed up they are all but impossible to catch. The trout will get used to this so and often won't move into these shallower feeding areas until this warming takes place, consequently you might be wasting some good hopper water that the fish haven't moved into yet by fishing early in the morning. 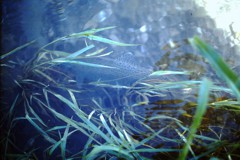 Trout will move into the shallows looking for Hoppers

Grasshoppers will live almost anywhere along the riparian zone of streams or lakes but certain areas will always be better than others. Areas with overhanging vegetation are always a good bet. Higher banks with grass or a field of crops are dynamite spots to find hoppers on the water, and harvest time can produce some extraordinary hopper "hatches". Remember a bad hopper year for the farmers will be a good hopper fishing year for the angler. Hopper fishing can be good anywhere in a lake or stream but near the shore or bank is always better. Wading upstream casting a hopper pattern tight to the bank can be deadly, and don't ignore the shallows especially in riffled water, fish will often move into this very "skinny" water for these large morsels. While we usually associate hopper takes as aggressive, exploding takes, they can also be gentle sips or slurps that barely move any water. When drift fishing a river from a boat the water conditions will dictate how often you will need to cast. On swift, riffled water you will have hit the pockets in behind rocks and other obstructions by making many short and quick casts. On gentler runs keep the fly on the water as much and as long as possible, reposition them occasionally by twitching, skating or using an aggressive mend. 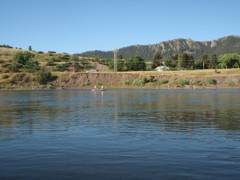 Hopper patterns are large flies and very user friendly. They are easy to see, a lot of the time they are tied with foam with bright colors on top, so they float high and are easy to spot on the water. Also they don't require a delicate presentation. Plopping them on to the water with a splat acts like a dinner bell for the trout. The naturals don't land gently and they struggle fiercely once on the water so twitching and skittering your fly a bit will actually give you a more natural presentation. When using most hopper patterns in fast or riffled water you won't have to impart much action as the flies’ rubber legs will do the work, but on slower, flat or calm water you can move and twitch the fly to imitate a struggling hopper. You don't need a special rod for hopper fishing, your favourite nymphing rod will do the trick. While large in size hopper patterns are usually not very heavy and the foam ones are tied with closed cell foam so they absorb very little water. I like to use a shorter leader when fishing hoppers, 7.5 feet instead of my usual 9 foot, and I like to go to a little stiffer 3X leader to handle the bigger bug. These flies are usually big patterns with wings and legs and whatnot hanging off of them and they tend to "helicopter" when cast, twisting your leader. The shorter length and stiffer material helps alleviate this somewhat.

You will also want to slow down your hook set, it's very easy, especially on the aggressive takes to pull the fly out of the fish’s mouth, try saying "now I've got you" or so other saying before setting the hook, a "catch" phrase if you will. The term "hopper/dropper fishing was coined when some astute anglers started hanging another fly off of their hopper. The hopper then becomes both a fly and a strike indicator. The second fly is often a nymph but can also be a dry fly. Quite often at hopper time there are Trico’s hatching, small #20 or #22 dry flies which are very hard to see. Tying one these on a couple feet from your hopper, either off of the eye or the bend of the hook is a great technique. You know that your Trico is within a foot or two of your hopper so if you see a rise anywhere near it, set the hook. Ants are also a good choice, leave the floatant off of them and let them sink slightly below the surface, the result can often be fish that try to take both flies, grabbing the ant on their way to the hopper! Another good tactic for smaller streams that have grassy banks is to cast your fly into the grass and then tug it off onto the water, the takes on this style of presentation can be ferocious. 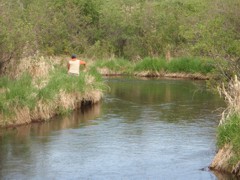 Try casting up on the grass and pulling your fly off into the water.

When imitating hoppers, as with any insect, try to match the body color as close as possible, natural hoppers will have bodies that range from dull browns and tans to ones that have bright yellow, green and orange bodies, and everything in between. Hoppers hatch in the spring and grow throughout the year so be aware of the size of the naturals and know that they will grow as the year progresses. They will vary on various water bodies so be prepared with a variety of sizes, styles and colors. There are basically three styles of hopper patterns, foam patterns that ride high and wiggle like crazy which are perfect for bigger rivers and streams. Classic or natural patterns such as Dave's' Hopper or Joes' Hopper float lower in the water and are perfect for gentler currents and smaller streams. Parachute style patterns which ride lower in the water but are still easy for the angler to see due to the parachute style wing. 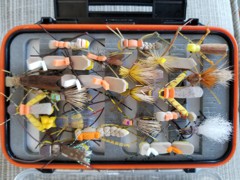 Hopper patterns are excellent searching patterns when the naturals are around, and even for a while after they have been killed off by a hard frost or two. Once the trout get used to seeing them they recognize them as a big meal and will go out of their way to eat them. Dry fly fishing with large easy to see flies with no need for a delicate presentation that doesn't start until mid-morning makes hopper fishing one of my favourite ways of fly fishing. Ask anybody who has hit the hopper hatch just right and they will regale you with stories of large trout, in shallow water exploding on a big dry hopper pattern presented with splat. Give it a try this fall, you'll be hooked.

Big trout know that Hoppers are a big meal and will lose some of their wariness at Hopper time.