Fall brings the big walleye out

Our prairie rivers come alive in fall, as all game fish seemingly go on a major feeding spree ahead of the approaching winter. Every fish you can think of is in the game; pike, sturgeon, goldeye, redhorse, but the major player around my neck of the woods is the walleye. Every pool has walleye, and if you fish them on an overcast sky or into the evening, many of these pools have huge walleye. I have personally caught two over thirty inches, and I had the fortune to net a 33 and a half inch beast for my friend Brian. It was easily 13 pounds, but it could have pushed 15 pounds. It was impressive. 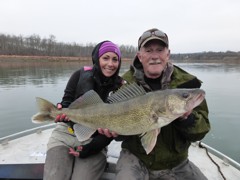 The biggest walleye I have yet put my hands on. A 33 and a half inch mega walleye caught by Brian.

Come fall, these walleye are in peak condition. They are heavy and fully recovered from the rigours of spring spawning. They are aggressive, and will hit lure sizes that may surprise you, including stuff like a full-sized magnum Rapala. I remember tossing those 7-inch magnums in hopes of gaining the attention of the trophy pike also known to inhabit these same river pools, but instead, I caught a steady supply of 20 to 30 inch walleye. It was shocking, especially when I realized the first fish wasn’t a fluke, but rather, that these fish had huge appetites and were willing to take a run a bigger prey.

That said, this isn’t a case of bigger baits equals bigger fish. This is a case of hungry fish will eat everything that comes front of them. If the first thing they find is a quarter ounce jig and minnow, they’ll smash that. If it’s a husky jerk, watch out. When I’m on a boat, the jig and minnow is the hands down, most effective way to catch walleye. They have a taste for fresh fish and a jig and minnow fits the bill nicely. 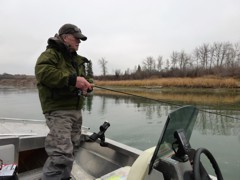 Drop a jig and minnow down and if there are walleye around, they are sure to bite

Just find a bigger pool and work all the depths trying the slow water in the pool’s center, to the faster water along the pool’s edge. Somewhere in there, I will find the fish, and where I find one I will usually find more. And here is the interesting thing; in the North Saskatchewan River, walleye do not sort themselves according to size. That is, if I catch a two-pound fish, the next fish could also be a two pounder, or it could be a 5 pounder, or even a 10 pounder. 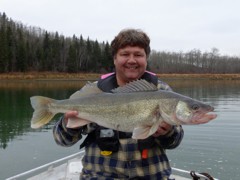 It’s not everyday you crank a walleye over 10 pounds, but in the fall this happens much more often.

If I’m fishing from shore, the jig and minnow is still a winner, but I also like to run a slip bobber with a full sized dew worm for bait. I lightly hook the work so most of it is dangling and twisting and I set the float depth so that bait is drifting along, either lightly dragging bottom, or just above bottom. Anytime the bobber stops, does something weird, shoots under, I set the hook. Many times those weird things are fish. The bonus I like with floating a worm is the incredible variety of fish I will catch. All the sudden, suckers, redhorse, goldeye, and even the odd sturgeon come into the mix.

One thing that I’ve been doing lately is putting a worm on the back end of a one eighth ounce jig and running it under the same slip bobber. I still catch a ton of fish, and the neat thing is that, for whatever reason a jig hook isn’t swallowed anywhere near as deeply as a plain hook, so it makes for a much easier release. I tried the same with heavier jigs, but I found fish were dropping the bait more often; likely because that extra weight may makes the bait feel unnatural.

Besides the huge appetites of fall running walleye, the improved water clarity will allow for a whole host of other effective presentations as the fish can also use their eyes to track food. This is where lures of all sorts have a chance to shine. If I had to pick one lure that will get the attention of a walleye day in and day out, it would be the Rapala Husky Jerk in a size 11. That lure has everything going for it. It can be fished, fast, slow, dead still and it seems to have that profile that fish just love. Don’t be surprised if the largest goldeye of your life also turns up on the end of that lure, as that has happened to me and my family several times over. Walleye, though, love the Husky Jerk, and it should be a must carry if you are at all thinking of tossing hard bodied baits for river fish. 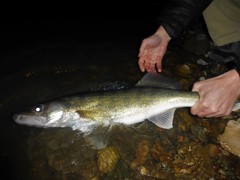 The big walleye like to come out at dark.

While the time of year is a big thing, time of day can often be an even bigger deal. If I’m keen to catch the biggest of the big walleye in the river and I have my pool chosen, I will often fish it in the evening and into the dark, especially if I am in the city and there is some ambient light around. Night fishing for river walleye is hugely effective, especially for the bigger fish, who become bold as the light goes low. It is also a unique and very different angling experience to fishing the exact same water under the cloak of darkness. Things are different at night and more than once a big ol’ beaver has made me nearly jump out of my pants when they sneak up and smack the water with their big tail right at my feet. The same can be said for having bats flying around my fishing rod, investigating the line and such. 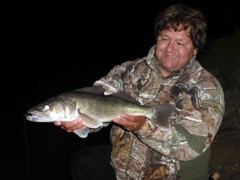 This chunky walleye made my evening. Fall walleye are in fantastic shape.

A couple years back I was fishing the river off the bank using a small jig and worm. I was telling a story to my buddy Aaron when I got a bite. I set the hook and felt good weight, but continued telling my story, until I looked down. It was a huge walleye. I took a pause on the story telling and Aaron helped me to land a 30 and a half inch walleye. It was a stunner, and I smiled, because at this very spot several years earlier my good friend and fishing buddy Aaron, had did the exact same thing to me. May the next big bite be yours.