A friend and I have been on a quest the last few years to land Master Angler-qualifying pike in Manitoba on our flyrods. That means a pike of 41" or longer, certainly doable in many of that province’s remote, northern lodges where fish grow large and angling pressure is minimal. We’ve been fishing drive-to waters, however, and have, admittedly, failed to meet the mark. We catch our share of fish, just nothing that has approached the MA standard. So this year we decided to take the plunge and charter an aircraft in early June. Mind you, we weren’t heading to one of the far-flung traditional trophy hotspots - those were simply beyond the budget we’ve set for our annual adventure. 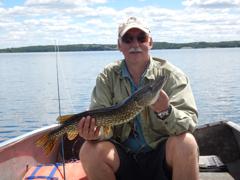 We found plenty of small pike, but the large hens eluded us.

The lake we selected is actually a natural widening of the Gammon River in eastern Manitoba, near the Ontario border. Managed by the fine folks at Wallace Lake Lodge and Outposts , the Gammon River Outpost is only a short, 20-minute air hop from their main lodge on Wallace Lake, east of the town of Bissett. The setting was perfect for our needs, a lake (we’ll call it a lake, anyway) with a healthy population of pike and walleye, a simple one-room cabin with a generator that ensures lights and a hot shower, and a 14-foot Lund powered by a 10-horse Yamaha. What more would we need? Bounded by waterfalls at each end, the lake is about 6 km long, and no more than 1.5 km across at the widest point. But what it may lack in sheer size, it more than makes up for in shoreline, with numerous twists, turns and bays. The challenge? Finding pike, large pike, in the two-and-a-half days we had.

Breaking, Down the Water We began by exploring the lake to identify potential fish-holding water. The small falls at the inlet formed a natural barrier to upstream fish movement, so it was pretty safe to assume there’d be fish stacked up below it. The falls at the outlet end dropped a good 10 metres, again creating a barrier over which it was unlikely large pike would pass.

We checked out each of the half dozen or so large bays, identifying which supported beds of emergent vegetation that would be attractive to spawning pike, which were shallow enough to warm up early (again attracting spawning pike), and which had newly erupting submergent vegetation (cabbage) that would provide cover for post-spawn pike laying in ambush for potential prey. 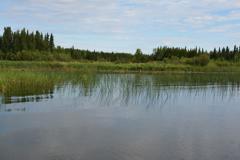 Bays with a combination of emergent and submergent vegetation proved to hold the largest pike.

Natural constrictions in the lake were another point of interest for us. In these narrowed channels the current speeds up, attracting bait fish and, subsequently, predatory fish. Our plan was to fish each of the high-value locations in our search for mature, hen pike.

Considering Fish Behaviour The ice had been off the lake for a few weeks by the time we arrived, so we knew they’d completed their spawn. Immediately post-spawn, large pike are seeking to feed heavily. We also knew that, as the water was still relatively cold, mature pike wouldn’t have dropped down into deeper, cooler water as they would once the water column heated up. Our expectations were that even the largest pike would still be found in water less than 10 feet deep. As a result, we decided to concentrate our efforts in relatively shallow waters that had the potential to attract and hold schools of baitfish, as near to pike spawning habitat as possible. 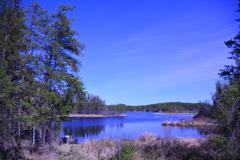 Evaluate a lake’s potential based on habitat type and fish behaviour.

It’s Fishing Time We began at the inlet falls, if for no other reason than it was the best water close to the cabin. We anchored our boat some 50 metres below the falls and began fan-casting large streamers. We picked up a few small pike, but nothing significant, so we began moving in, 10 metres at a time. Eventually we were tight against the little fall, casting parallel to it. It was here we caught the largest pike, but they were in the mid-30-inch range, not what we were looking for.

From there we headed to the bays, fishing each one in order. Those without significant emergent vegetation and minimal or no submergent growth produced the fewest and the smallest fish. The more emergent vegetation, and the more cabbage, the greater the number and the larger the size of fish we caught, but still we didn’t hook up with anything resembling what we were seeking. 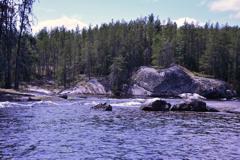 The little falls on the lake’s inlet created a natural barrier against which fish would stack up.

This pattern continued over two days, as we continued our search for large fish. We’d change up our fly patterns and switch between floating and sinking lines as the conditions, depths and our mood dictated. We’d always pick up a few pike and the odd walleye, but a mature hen still eluded us. On our very last afternoon we decided to go back to the one bay we’d found with the most cabbage and a shoreline dense with bulrush, perfect spike spawning cover. The bay averaged four to five deep, and the prevailing wind that afternoon allowed us to drift as we cast, so we were able to cover most of the water without having to fire up the motor. I tied on a black mouse pattern that I strip in short jerks across the surface. 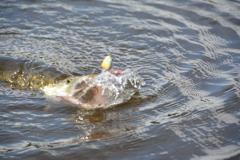 For sheer excitement it’s tough to beat the moment when a big pike engulfs your fly.

Wouldn’t you know it, on my third cast the mouse disappeared in a frothy boil, and the fight was on! The weight on my line told me I was into a large pike, so I remained patient, letting the fish take line whenever it wanted. With big pike you must be careful as you bring them close because they’ll invariably erupt violently when they see the boat. If you’ve got them on too tight a line, they’ll bust you off or pull the hook out when they go. Eventually I hoisted the big hen into the boat for the careful measuring. It stretched the tape to 39.5 inches, shy of the magic mark by a tad, but nonetheless a dandy pike. 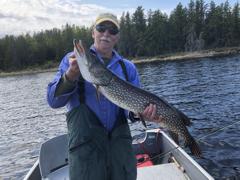 In that same bay, just 15 minutes later, I had another big pike engulf my mouse. I’ll never know how big she was because the hook came out after about 10 seconds on my line. That was the bad news; the good news was that we were into them! We’d found the right location by systematically evaluating the habitat, and discovered a presentation they’d respond to through trial and error.

Sometimes the fish gods aren’t kind, however, because just when we had it all figured out, the wind picked up, the skies darkened and the rain began to fall. We had no option but to turn and head for home, wishing, as all anglers do, for just one more cast.