The last two weeks of May and first two of June is a cosmic time for Alberta fly-rodders. It truly is fly-fishing Christmas with the low altitude brown trout rivers experiencing the great fly hatches of the season. The big boys like golden stones and salmon flies, or the brown and green drake mayflies, cause the big brownies to abandon their instinctive guile and caution and gorge themselves on the super-sized morsels of protein passing through their window of opportunity. Or blanket hatches of smaller western march browns and blue-winged olives. The hatches go on forever and the party never ends. But it always does. 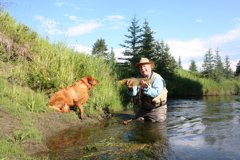 By mid-summer the great aquatic insect activity of spring is but a fading memory. Sure you can follow the bugs up-dip into the foothills and mountains where the big emergences of late spring are delayed and extended the higher in altitude you go. I’ve experienced great green drake mayfly and golden stonefly hatches in the canyon of the South Ram River on the August long weekend. Six weeks or so after they stopped appearing on flatland rivers like the North Raven and Red Deer.

The westslope cutthroat trout were taking full advantage of them. Of course, trout can be caught in all kinds of conditions employing a myriad of angling techniques. But in my book it doesn’t get any better than casting to actively rising fish in moving water with big dry flies. But just when you think it’s over, it ain’t over. When the crops in the fields begin showing signs of ripening and the dog days of summer are upon us fly-fishing’s second season commences. Because it’s Hopper Time!! By the middle of summer the grasshoppers which hatched in June are now approaching adulthood and are highly active. The trout clearly know it. Here are some key components of turning grasshopper fishing into success.

Where to Fish - Casting a hopper pattern over the runs, riffles and undercuts of an Alberta trout stream in mid-summer will certainly elicit strikes there’s no doubt. But where it really comes into it’s own is along what become known as a "hopper bank". Grasshoppers, of course, are terrestrial insects and generally have no business being anywhere near the surface of a trout stream. But where their natural pasture habitat and that of the trout interface, grasshoppers become an important trout food source. 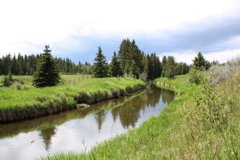 The trout line up along these grassy banks where the sedges and brome grass intersect the river’s edge, waiting for an errant grasshopper to lose its grip and drop onto the water. Where they get stuck in the surface tension and their fate is sealed. These hopper banks are present on many of our lowland rivers and the angling is enhanced on windy afternoons when the likelihood of a grasshopper becoming dislodged during a gust is enhanced.

Casting - One sunny August afternoon I was working my way up a section of Alberta’s famous spring creek, the South Raven River, casting a hopper pattern with my 5-weight trout rod. There were tantalizing mid-stream scours separated by weedbeds. Although I occasionally made a cast down these potential feeding lanes, because you never know, the centre of my attention was the stream edges. Where the lush streambank grasses brushed the creek surface.

I was trying to make the fly float as close to the trailing grasses as possible. For good reason. Because on one tight drift something exploded under the fly and after a tense battle a 20-inch buttery brown trout lay gasping in my net. The trout will often lie right under the grass so a drift as close to the bank as possible will get the best results. On windy days this may be a challenge, but confronting and solving problems is one of the great attraction of fly-fishing. Especially if it provided positive results. 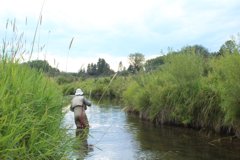 Noise - Sloppy casts that create a lot of noise and commotion are considered major rooky mistakes in most fly-fishing situations. A bad cast which lays the fly hard on the water is a sure guarantee to scaring the fish, particularly if they are big, super-secretive brown trout. So fly-fishers hone their skills and perfect techniques to make feathery-soft casts that deliver the fly on the water surface with a minimum of disturbance. But not with grasshoppers.

Hopper slapping is a proven technique of revving up sullen trout, which respond to the sound of the fly striking the surface with a good healthy "splat". The rise a slapped hopper can be explosive and heart-stopping. Another way of inducing a strike it to cast the grasshopper imitation onto the hopper bank allowing it to bounce off the grass and fall onto the water. Again, when it comes to the Second Season, a noisy cast is your friend.

Motion - Another of the often-repeated orthodoxies of fly fishing is to eliminate, as much as possible, any unnatural motion of the fly. Entry level fly fishers are instructed to make elaborate mends or tricky slack-line casts to eradicate the effect of conflicting currents, allowing the fly to drift drag-free as long as practical over the strike zone. The fly fishing bible teaches us that any action on the fly that does not exactly mimic the run of the river will turn off the trout and ruin you day on the stream. But, again, not with hoppers. Dead-drifting grasshopper flies is a great way to catch later season trout, there’s no doubt. Occasionally you have to wake them out of their mid-afternoon lethargy. One August day on the lower Red Deer River I was having a so-so day, not on trout but the central Alberta river’s other resident bug eaters, goldeye.

I was picking up the occasional fish, more times than not my perfect drifts passed over the lies unmolested. Until I gave the floating hopped pattern a twitch, creating a mini-disruption on the surface. Immediately a little silver "prairie tarpon" rose from the bottom and hammered it. So it went for the rest of the afternoon. Whenever I gave to fly a pop the goldeye reacted. The motion should be short and modest to replicate the struggle of the natural as it tries to free itself from the surface tension. Just a brief strip or a simply lifting the rod tip slightly. Then let the fry float free again and wait for the ambush.

Flies - Hopper imitations come in two classes, old-school hair and feather creations, the most well-known being the Joe’s Hopper. Or new-age creations that go by a variety of names but began with a sandwich of high density fly-tying foam and were called the Chernobyl Hopper. A fly-tying mutant named after the infamous Soviet-era nuclear power plant that went critical. 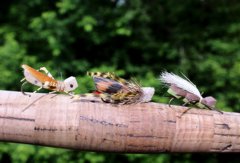 Although both work fine I’m more partial to the Joe’s with it’s clipped deer hair head and rear legs created with a few strands of ring-neck pheasant tail - knotted to replicate the knee joint and stiffened with flex-cement. The Chernobyl employs rubber strip material to create the impression of legs. In either case a leg silhouette on the water surface is the key to a good hopper pattern. The body material, whether it’s foam or dubbing, should match the colour of the streambank naturals, which in Alberta ranges from dirty yellow to light olive. It’s a good idea to have a variety of sizes in your flybox ranging from #12 to #8 tied on long shank hooks to match the naturals. Because you never know when the trout will get selective.

Common fly-fishing knowledge tells us that a hot, sunny August day with a big breeze blowing is one of the least likely times to find success by picking up a fly rod and heading for an Alberta trout stream. Where it’s better to wait for the cool of the evening when the shadows are on the water and the reluctant trout come out to the feeding lanes to intercept the evening hatch. It’s these kind of conditions that are ideal for hopper fishing. When the jacked-up insects flush from the grass before you on the walk to the riverbank like Hungarian partridges. The Second Season of Alberta fly fishing is about to kick-in.