I will admittedly confess to owning hundreds, if not more, flies. They catch fish, and they do it extremely well, which is why they are a staple in my angling repertoire. But if I was to narrow the field down to my all-time favourites, then I’m looking at a half dozen or so, yet some of them are as different from each other as a lead head jig is from a crankbait, but the common denominator is that they are fish catchers and to me, that’s all that matters. 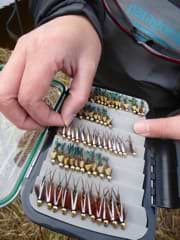 The prince nymph is one of my all-time "go to" flies.

Most everyone will agree that the bead head prince nymph belongs on this list. It catches trout in lakes, grayling in streams, and mountain whitefish in the big rivers. And they’re no slouch at wrangling up big bow river browns or rainbows too. The bead head prince has everything going for it. Its buggy, has that alluring peacock hurl, and is one of the best generalist patterns out there. This fly catches fish. All that’s needed to fish this fly effectively is an ability to get the hook on or near bottom. The fish will take care of the rest. Fish a large pattern to begin with, like a size 10, and work down from there, if you suspect fish are in the neighbourhood, but not yet willing to bite. Somewhere in that sizing down process the fish will typically respond and you’ll be set. 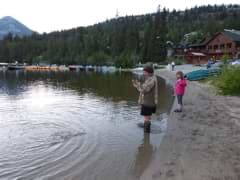 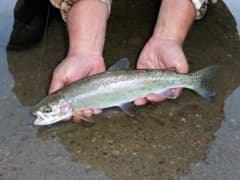 The next fly is a rather unique fly in that it was developed locally, in Jasper, and is just starting to catch on outside of its mountain beginnings. This is the double shrimp. Tied for the rainbows and brookies of Maligne Lake, the double shrimp is devastating at catching dog day summer trout. When the weather is hot, the fishing can even be hotter with this dandy tied to my line. The effectiveness in the pattern has everything to do with location within the water column where you fish it. When the weather gets hot and the surface water turns warm, trout will often descend to greater depths to escape the summer heat, and down there in that deep water the prominent forage is quite literally tiny crustaceans, like daphnia and copepods. They’re no bigger than a pin head, but they can be extremely dense, forming clouds of them, which trout key in on. The trout just cruise on through, opening and closing their mouths, filter feeding as they go. Now a double shrimp looks nothing like an individual daphnia, but it may somewhat resemble a patch of them and I suspect that’s what triggers the strike. Whatever the reason, the double shrimp fly fished deep is extremely effective on summer trout. 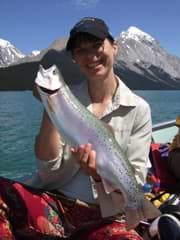 A beautiful Maligne Lake rainbow caught by Jolene, and the place where the double shrimp fly was born.

This late summer fly may not really be classified as a fly by some, but I think of it that way. I’m talking about those big honking polar bear hair flies that are 6 to 8 inches long and look everything like a small fish. This fly has one primary application, and that’s to undue the biggest bull trout that swim in our streams and rivers. In my travels, I opportunistically stop and go into most every fishing shop I cross paths with, always on the lookout for big fishy looking flies. The closer it looks like a mountain whitefish, the better, and the bigger it is the better. These flies aren’t cheap, but man are they effective. I have caught whopping big bulls from every river system I’ve tossed them in; the Athabasca, the Clearwater, the North Sask, and a number of smaller streams. They have all produced great bullies. As with most big bait deals, the first few casts represent my best chance at a big bite, so I make the most of those casts, taking a moment to get myself, and my hook into what I feel is the absolute best position to connect with a bull trout. I do not camp out on a spot when I’m hunting big bullies. I fish it and give it a fair chance, then I rest the pool and change it up, or I move to the next pool. 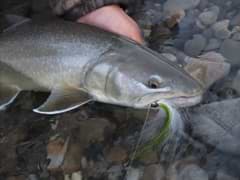 The bead head spratley is a sleeper pattern. I have only been fishing this fly for a half dozen years now, but I am so impressed with its fish catching prowess, I just had to include it. This is especially so, because this fly has been a walleye catching machine. That’s right, I said walleye. One day I ran out of bait on a hot walleye bite at Wab, so I decided to try to keep the good fishing going by using the bead head spratley off a strike indicator. "What the heck," I figured. The result: it crushed them. I was so impressed I tried the bead head spratley in other walleye lakes, and I did extremely well there too. I was left shaking my head in amazement. Whatever it was about the spratley, the walleye liked it, and I’ve caught a bunch of these tasty sports fish with them. That said, the spratley is also an outstanding trout fly and it does wonders, whether fished off an indicator, chironomid style, or trolled off a sinking line. Bead head spratleys; the fish like them, and that’s all there is to it.

The next fly is called a bullet head fly, and I found them in some little tackle shop in BC. If you can ever get your hands on them, buy a dozen or more immediately and thank your lucky stars. These flies look like a small fish, and the colouration on the pattern I purchased look remarkably like a stickleback. To this end, I fish this fly shallow and tight to shore, where stickleback are found. If there is a chop on the water, I fish the windy shore and I always make a point to tying this fly on when the light gets low and the big trout in a lake have pushed in shallow to feed. A fast jerky presentation, often in inches of water will turn evening time into a big trout production factory. It really is that good. And because of its fishy profile, I often tie it on and let it run through the pools, rapids, and runs of most any stream I fish and the results are always there. I don’t know the proper name