In late February of this year I had the opportunity, before the Covid19 virus shut everything down, to travel to Xcalak, pronounced Ish-Ka-lock, Mexico to fly fish for Bonefish and Permit. There was also a chance at a grand slam as there would be a few Tarpon around. I had planned on going somewhere warm to fish and pass away some of the Alberta winter, so when I got the invite to join 5 other "industry" anglers on a 6 day salt water excursion to Tierra Maya in Xcalak, Mexico I jumped at the chance. Little did I know that this would be my last fishing trip for awhile before travel got shut down, very glad I went when I did. 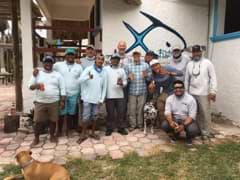 Tierra Maya lodge is located in the small, 385 inhabitants, town of Xcalak which is about 5 - 6 hours south, by road, from Cancun at the southern end of the Yucatan peninsula. We were met at the airport by a shuttle van arranged by the lodge and travelled down Hwy.307 along the Mexican Riviera. We stopped in Tulum, the last "tourist" town along our route for a lunch of tacos and beer and then headed farther south into less "touristy" Mexico. Arriving at the lodge we were greeted by the owner, Jesse Colten. Jesse lives and guides in Colorado in the summer months and in the winter hosts salt water anglers at Tierra Maya, also known as the XFlats. The lodge sits on the ocean side of the Caribbean Sea, with the world's second largest barrier reef just offshore . While the ocean side was preferred by the guides a short boat ride to the south and through a canal that is the border between Belize and Mexico brings you into Chetumal Bay. Having the bay so close assures that you can almost always get out of the wind if need be. The main focus of the lodge is permit, and they are plentiful in this area, but there are plenty of bonefish, tarpon depending on the time of year, Jack Crevale, Snapper and numerous other species to keep the angler entertained between shots at permit. With the permit being so numerous here you will get plenty of chances to cast to them, with a lot of luck and reasonable skill you have a good chance of hooking one.

Xcalak sits behind the second largest barrier reef in the world. 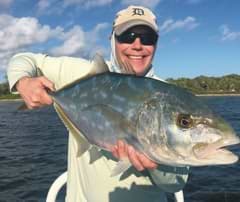 Permit and Bonefish aren't the only species available to the angler, such as this Reef Jack.

On this trip I took an 8 weight rod for bonefish, a 9 weight for permit and a 10 weight on the chance we might see a Tarpon. Reels with matching lines and plenty of backing, 250yds. minimum, that had good drags. Your equipment doesn't have to be salt water safe, except for your fly line, but it helps. I took a hip pack for the times we got out of the boat and a boat bag that had spare leaders, tippet, flies, sunscreen etc. in it. The lodge has a rinse station for cleaning your equipment at the end of the day to remove any salt residue and other stuff that may wreak havoc on your gear. The guides would meet us at the dock every morning at 8:00 with their boats, Pangas, which were all set-up to hold multiple set-up rods so it is just easier to rigs your rods in advance instead trying to constantly change leaders and flies for different situations as they arise. I had the usual flies tied on, a shrimp pattern on the 8# for bonefish, a Black Death on the 10# for Tarpon and a Crab pattern on the 8# for the permit. One trick I learned on this trip is to have a 12"-18" wire leader rigged with a Barracuda fly on one end and a slip loop on the other, if you encounter a Barracuda and you want to fish for it you simply hook the rig onto the fly you are using and pull the slip loop tight around the bend of your existing fly. You can now cast to the Cuda and know if he takes you won't get bitten' off with its razor sharp teeth.

The boats, known as Pangas, come set up to hold rigged rods.

If tarpon are the silver kings then permit are the queens of the flats. Permit like a little deeper water than bonefish they still can be found on the same flats. Bonefish are usually found in knee deep water while permit usually like water that is hip deep. Permit are one of the toughest salt water fish to hook and land, not because of their fighting ability, which is substantial, but because they have great eye sight, a great sense of smell, great hearing and are very wary. They can be very moody and uncooperative at times, which can be very depressing after you spend all that time looking for them. Permit can weigh up to 50# but with a fly rod a 40# pound fish would be a fish of a lifetime, fish in the 5-25# range are more realistic. They can be found in schools of 100 fish, groups of 6 or singles, and anywhere in between. While calm conditions make for easier spotting and casting to permit ideally a little wind generated chop on the water will help disguise the boat, the angler and the cast. Permit will frequent both inside and ocean side flats so you must "hunt" them. Once spotted all you have to do is make a perfect cast, perfect retrieve, perfect hook set and then you get to fight one. All easier said than done. Your cast should be in front of the permit and close enough for him to see it. Some people say to hit them on the head with the fly, others say to lead them, I just listened to my guide and tried to cast where he was directing me. If the fish doesn't see it then let it drop and then start a retrieve with long slow strips. There is a lot of patience required when permit fishing, with a second angler in the boat you spend a lot of time helping look for fish while patiently waiting your turn. 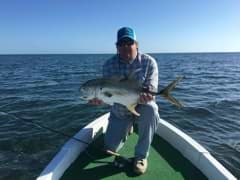 In the ocean you never know what's going to eat your fly!

Like most saltwater fly fishing the guide is the most the important piece of the puzzle, without them far fewer fish would be spotted, less casts made, and less fish fooling retrieves made. Poling the boat from the back the guide scours the water looking for the tell tale sign of permit, either the stiletto like fin poking above the surface or the "push" of water being moved by several fish or the "nervous water" that signifies the feeding of a large group of fish. At times you'll have Permit following stingrays, picking up whatever crabs and shrimp the ray disturbs up off the bottom. Sometimes when they spot the fly they will rush it and take it, other times they will rush it, stop short and just eyeball it. Many times they will just totally ignore it. If the Permit takes the fly you must set the hook with a strip-set, the natural reaction, and hardest to overcome, especially for the trout fisherman, is to NOT raise the rod tip. You want a direct connect between you and the fish with no "shock absorber" in between. The strip-set is just that, a continuation of retrieve just quicker and harder with your rod pointed at the fish. 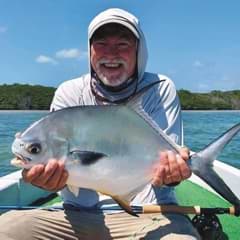 Success, first Permit on the fly.

We spent the first morning warming up on bonefish and then it was serious permit hunting time. I had a few chances in the first couple of days, a few that the fish weren't interested, a couple where a snapper beat the permit to the fly and a couple of fish spooked by bad casts. Finally everything came together, cast 10 o'clock, 40 feet, good let it sink, strip, strip slow, set, set, fish on! After a ten minute nerve racking battle my first ever permit was tailed by my guide. A couple of quick photos and back into the ocean he went. There were high fives all around, the addiction of catching permit had firmly taken hold as all I could think of was the next one. 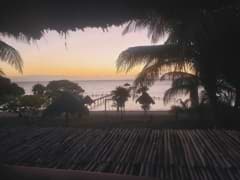 Sunset on Xcalak, I will return for Permit number 2.

Permit are definitely a cult fish, people get obsessed with chasing them, one of the group I was with said it took him six trips before he caught his first one. Our trip saw six anglers fish for six days and landed six permit, a couple of guys got two, a couple zero. I realize now how fortunate I was to hook and land a permit on my first trip, I learned a lot on that trip and hopefully when the world gets back to normal I will return to Xcalak and try for permit number two.