The COVID pandemic has created a "rush" on the outdoors the likes of which has never been seen. People are buying up bikes, camping equipment and fishing equipment like never before. Fishing is the perfect sport for these times, it is outside, social distancing is not a problem, it is relatively inexpensive and it is the perfect way to relax. Not since the 1992 film "A river runs through it" featuring Brad Pitt shadow casting has there been such interest in taking up fly fishing. With the influx of people, some new to the sport, some getting back into it after a hiatus, waters are getting crowded. While we all wish we could keep "our" spots to ourselves, in this day and age of the internet, it’s just not possible. While solitude has always been a part of the sport of fly fishing, that has now, like everything else in our world, changed. It is possible to catch some fish even when your favorite spot is busier than what you're used to. Here are a few tips to make your experience better.

Finding solitude on your favorite river or creek is becoming harder and harder.

Stream etiquette is the one thing that can really affect the angling experience. Some newer anglers may not be very well versed on stream etiquette so remember this when you run into people out there. Here are a few of the unwritten general rules. Generally the water another angler is fishing belongs to them, do not crowd them, watch and see if they are fishing upstream, downstream or are stationary. If they are working downstream it is permissible to get in the water just upstream of them, being careful not to kick up a bunch of mud or other stuff that is going to drift downstream and screw up their water. If they are fishing upstream leave them two or three good corners or sections before starting your fishing.If they are stationary you may want to talk to them and see what their intentions are, who knows you may end up with some good advice or even someone to fish the rest of day with. A fisherman working upstream has the right of way over an angler working downstream. A fisherman working upstream usually moves slower and disturbs less water, so if you are fishing downstream and spot another angler working up make sure and exit the water well above them so you don't spoil their water.

You are always going to run into people who only think of themselves and will crowd you or "hole hop" you but you should always treat other anglers the way you like to be treated. Lastly bank anglers take priority over floating anglers, boats should always try and pass shore anglers in a way that is not going to disturb their water, in smaller streams this may mean going behind the angler, going between them and shore. Make sure when you come upon another angler that you don’t do anything to screw up their water, walk far enough back from the bank so that your shadow doesn’t spook the fish and don’t go slogging up to another angler to see how they’re doing, ask from a distance.

Our waters are becoming more and more crowded.

While many anglers, experienced or novices, will fish the obvious spots in streams, the big juicy corner pools, the logjam with lots of overhead cover or the big pool behind beaver dams, if you give some of the more unlikely spots a try you might be pleasantly surprised. The faster water between these spots may look too fast or turbulent to hold trout but you may be surprised. It doesn't take much of an obstruction to break the current and provide a hidey hole for a fish or two. Inlet streams, no matter their size are always a good area to check out, they are often dumping cooler water into the larger stream and after a rain they will also be putting insects and worms and all sorts of fish food into the stream. Also if you get to fish a pool that another has just left, rest the water awhile and then try some of the areas the other angler might have missed. Often anglers will fish only the deepest part of a pool and ignore the edges and tail out which are often time productive. Undercut banks can also hold fish so don’t walk past them without fishing them, cast your fly as close to the bank as possible and you might be able to coax a fish to come out play. 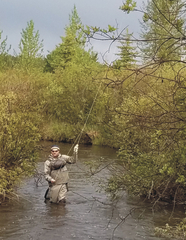 Fishing some tougher streams can get you away from the crowds

One sure way of getting away from the crowd is to walk. Many anglers will never get more than a hundred yards from their starting point. If it's possible I like to walk downstream for a good ways and then fish back to my starting point, walking upstream and fishing upstream can put you at a surprising distance from your vehicle so I always like to do my walking at the start when I'm fresh. While getting away from the parking area or bridge is a good idea don't neglect the area right there, while most people won't walk far, they will also think that there is no sense fishing right at the bridge etc. as they think it will surely be "fished out". It can also be useful to leave a note on your vehicle at a parking area or bridge as to which direction you went and at what time, other anglers can then head the other direction, this can save you and them the grief of both ending up at the same spot.

Fishing the runs can produce some fish.

Don't forget about other species of fish when planning your fly fishing trip, the small brook trout that used to be seen as a nuisance before might just be the answer. Head upstream into the headwaters of most trout streams where the fish are smaller but plentiful can often be more fun than fighting the crowd and trying for fish that have been fished over for hours. Some other species can also bring relief from the crowds, Arctic Grayling, goldeye, walleye and pike and more are more than willing to take a fly and be a lot of fun. Rocky Mountain Whitefish often inhabit the same waters as trout and feed on much the same thing but are not near as spooky and can save the day sometimes. 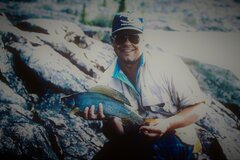 Give other species, such as grayling, a try.

If the trout have all been put down try nymphing up a Rocky or two, while not as pretty or acrobatic a s trout, they fight extremely well and beat getting skunked. Mid-week used to a good way to lose a lot of the crowd, not so much in this pandemic scenario with lots of unemployed people, but it is still quieter than the weekends. So don’t let the crowds get you down, get out and enjoy the fresh air, after all fishermen have been social distancing for a long time!