A day on our foothill streams

Hiking a cobble shore, Wayne and I make our way upriver, keeping a keen eye to the water. There is a long, smooth, piece of water that is a little darker than the rest. It is a deep run, and I am curious. I wade out wet, in my running shoes and shorts, waist deep, and chuck a huge streamer. Half way down the drift I feel the sharp tugs of a biting fish. It is likely a grayling, but the fly is much too big for the grayling, who is doing his best to chew it down. I take a couple steps downstream and repeat the process, and again, my oversized streamer is met with the dogged persistence of a hungry grayling. 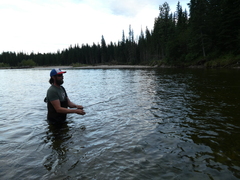 Just in front of me a fish rises, and another. Then another. The long, deep run is loaded with fish. I’ve seen enough. "Wayne, there are fish everywhere!", I yell to him in excitement. He starts to work his way down to me. I wade ashore and change up my bull trout streamer, and pull out my tiny bobber and beadhead prince nymph. It’s just the right size for the river’s grayling and mountain whitefish. I start with 3 feet of line between bobber and fly, but soon extend the length to 6 feet. The water is about 4 feet deep. 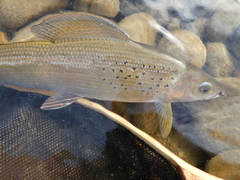 In front of me, I keep a sharp eye on my colourful bobber floating along in the surface film. It darts under and I set the hook. A grayling immediately jumps and splashes about. It’s about a foot long and in great shape. I admire it in the water beside me for a moment, and then set it free. This is the start of a glorious two hours of fishing. Nearly every single drift, be it Wayne’s line or mine, is met with a bite. More than half of these fish are grayling, but with our leader lengths long enough to allow the bead head fly to sink near bottom, we are catching good numbers of mountain whitefish too. I can’t imagine how many fish we caught, but a good estimate would be to count the number of casts we made and divide that number by two, and that would be a pretty reasonable number. 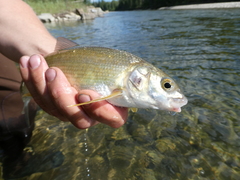 The fishing is excellent; beyond good, but looking upstream we see a multitude of pools and riffles with big, chunky rocks. Some of these rocks are the size of cars, inviting us to seek more, and push the adventure further. Wanting to see what was going on; we hike to the series of pools with the big rocks and find fish. They are not present in the astounding numbers that they were at the big deep run, but every pool holds fish, and on average, these fish are bigger. The coolest discovery comes when we look in and around all those rocks. In the shallows, tucked in tight, are tons and tons of minnows. They are about an inch long and everywhere. We’ve seen this show before. 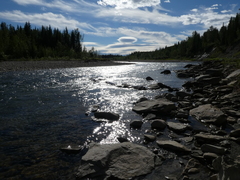 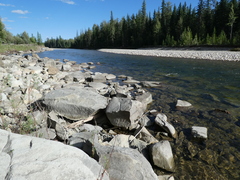 We find that pools that have a bunch of large rocks to hide in and around, or downed trees that have a bunch of branches to duck under and in between, provide perfect cover for baby fish to hide out, so they do. This gets the attention of every fish that likes to eat smaller fish, and because there is competition, and survival of the fittest, the largest fish generally end up taking over the prime spots. Carefully fishing through these pools with oversized streamers will often enough, pull the biggest fish off the bottom to take a run at them. So this has been my ‘go to’ fishing strategy, when I’m searching for a big bite. If the big streamer fly does not pan out, though, I do not give up on the streamer fly idea entirely. Instead, I size down. 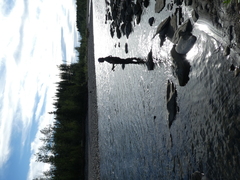 A glorious day on our foothill streams

My bull trout streamer flies area typically 4 to 8 inches long, and they do a good job of filtering out the smaller bites. But if I’m looking to catch more fish, and still have a shot a decent ones, I tie on a one inch, or slightly bigger streamer and probe the same water. While I fish my huge streamer flies high in the water (less snags, and also big enough for a large fish to chase), I run the smaller streamer flies tighter to the bottom. This brings more fish into the fold and I have excellent success using this method be it for trout, whites, or grayling. 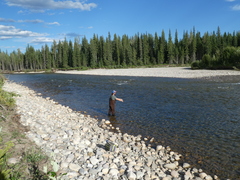 I am a huge fan of running streamers under indicators (bobbers) and I catch a lot of fish this way, but there is a time when the water is too fast or too deep, or both, to get the fly down to the fish. This is when I change things up, and run my streamer on a simple split shot rig. That is, I run a split shot a foot or two up the line and tie the streamer on the end. I put a large enough split shot on so the rig gets to the bottom easily, where the fish are. I probe the entire pool and usually catch fish. I also do this with little nymphs, like a bead head prince nymph, or a bead head pheasant tail nymph with equally good results. 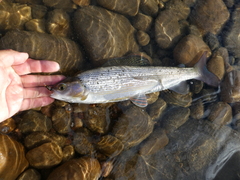 The prince nymph, hands down, fools grayling and whitefish. This fly is gold

Back at the river, I am looking at a pool with big rocks, riffles, and some deep water in front of me. "I wonder", I say to myself, and I pull out the big bull trout streamer fly. I cast, retrieve, cast again, retrieve, and so on. About half way up the pool I am hit and I can see the flash of a good grayling. A little later a smaller fish takes a shot. 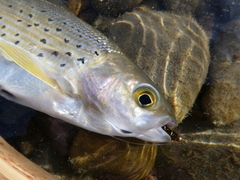 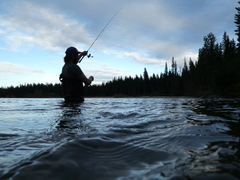 I know that I can easily catch these fish if I size down, but on this day, I have caught plenty. I am instead happy to be there, in that moment, enjoying time on the water with Wayne, in a beautiful wilderness setting. This is, and has been, a great day fishing our foothill streams.