There’s no middle ground when it comes to fishing Alberta’s west-central spring creek brown trout streams - you either love them, or you hate them. Unlike most of our freestone streams, which begin life as meltwater high in the mountains, spring creeks are born in underground basins known as aquifers. Filtered through natural geological features beneath the surface, these springs emerge cold and clear, creating instant trout streams with stable volumes and temperatures through much of the year. So, what’s not to love about that? Spring creeks by their very nature tend to be relatively short, immune for the most part from local rain and/or snow runoff events.

Further, the constant flow of water prevents many of them from freezing through the winter. This is a roundabout way of saying that spring creeks are not subject to the violent streambed and bank erosion forces that shape and reshapes our freestone rivers and creeks. Free from significant erosion, the result is banks lush with grasses, willows and spruce trees, and high levels of silt deposited in the streambed. And therein lies the rub for anglers, particularly fly fishermen - the overgrown bankside vegetation that eats your flies with depressing regularity and the boot-sucking silt that can make every step laborious.

Slow water guarded by overhanging grasses and trees is the norm, and makes casting a challenge.

What these spring creeks do have, however, are healthy populations of brown trout, and in these nutrient-rich waters they grow surprisingly large. Browns in the 16- to 20-inch class are pretty common, and there are just enough that stretch the tape well beyond that to keep anglers interested. But fishing these streams comes at a price, including your patience, your temperament and your sanity. Commonly referred to as the PhD’s of Alberta’s trout waters, spring creeks are the classic embodiment of the saying that, "nothing worth having comes easy". 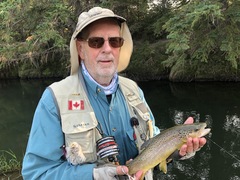 I guess it’s only right that we should name names, and while there are other spring creeks in the province, the two that garner the most attention from anglers are the Raven River and her little sister, the North Raven River, commonly referred to as Stauffer Creek. Both are found west of Red Deer in the Caroline area, and each exhibits both the best and the worst of what spring creeks offer. The Raven, being considerably longer than Stauffer, will blow out after significant rains, but Stauffer is generally fishable at any time of year. And while the Raven is open from April 1 until October 31 annually, Stauffer is open to fishing all year long.

The brown trout in both these streams are a funny bunch. They’re notoriously easily spooked, and when you stumble along through waist-deep water, slipping and sliding in the silt, fish that were feeding with the reliability of a Swiss watch will go suddenly quiet. On the other hand, they’re not particularly leader-shy, so as long as you can get a drag-free drift over them they’ll most often come up to have a look. Of course, browns being browns, they can also get awfully finicky some days, becoming very selective about what they’re willing to eat. Unlike freestone stream trout, which generally will take any fly that even remotely resembles the naturals they’re feeding on, in the relatively slow, meandering water of these streams, there are days when you simply have to "match the hatch". In fact, knowing the timing of the major hatches on the Raven and North Raven is an integral component of effectively fishing them. 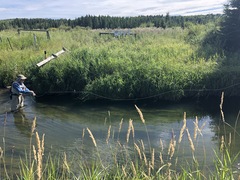 On the Raven, the most revered event is the salmonfly hatch of late May. Catch it just right and you can find browns feeding with an abandon seldom seen on any brown trout river. Large stonefly patterns in orange or pink are the ticket, with foam flies, Stimulators, Sofa Pillows and the like being most popular. Shortly thereafter, there can be a pretty significant golden stone hatch, but it doesn’t garner the attention of anglers, or the trout, like the salmonfly hatch does. Through the summer months, a series of mayfly and caddisfly hatches unfold and while it can pay to mimic them some days, seldom is it a necessity. The next really significant "hatch", when the trout can get really specific about their food preference, is the emergence of backswimmers in mid-September. Once again, if you hit it right, brown trout will practically throw themselves at your fly and you’ll wonder what all the PhD fuss is about.

Stauffer Creek is even more renowned for its insect hatches. The first that fly fisherman chase each year is the green drake mayfly hatch of the first two weeks of June, most significant on overcast afternoons. A few days later, but overlapping with the green drake hatch, is an equally significant brown drake hatch; these typically come off in the evening. Both are large mayflies, meaning flies in sizes #10 and #8.

Moving into June and into July, look for hatches of blue-winged olives (BWOs), pale morning duns (PMDs) and caddisflies that can carry through until August; be prepared to fish flies from #18s all the way up to #12s. In late summer, especially in dry years, hoppers can be plentiful on either river. On those days when the fish don’t seem interested in anything, consider a foam beetle pattern or, later in summer, an ant pattern. 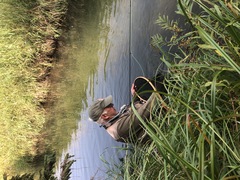 Many of the longtime anglers on these spring creeks fish exclusively dry flies. They must be masochists, I figure, exhibiting a "what the hell, I’m here already, I might as well make this as challenging as possible" attitude. Those not into self-flagellation however, regularly fish nymphs, either under a strike indicator or beneath a large dry fly. Streamer fishing, while it can be effective, is difficult, as the standard "down and across" presentation is all but impossible in many of the best pools. If you’re forced to fish your streamer upstream, you’ll have to strip like mad to stay in contact with your fly. 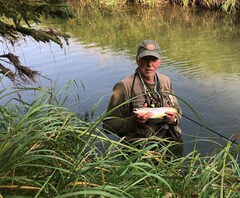 When everything goes right, a chunky brown trout is your prize.

If you haven’t fished Alberta’s renowned spring creek brown trout streams, you owe it to yourself to try. On the best days you’ll catch a handful of hefty browns, including the odd one that is trophy-sized by any standard. On the worst days, you’ll lose half a dozen flies on overhanging braches and go in over your waders trying to navigate a particularly deep and slippery section. Even those worst days are never a total write-off, however, as you’re guaranteed to end the day having improved your cursing skills.