The messages are intoxicating. "Twenty pike for the afternoon, lots are keeper sized," reports my friends Marielle and Vien. A couple of days later my friend Eztiaan messages me, "Thanks for the tip. My daughter and I are out and we have caught 16 so far." I knew they got to the lake around lunch and a look to my watch shows it to be 3:00 pm. They too, where catching them like crazy. I look to Melanie and say, "We have to go to Isle Lake. It’s happening right now." "Let’s go on the weekend," Mel says, and with that, plans are made.

The forecast shows Sunday to be the better weather day, so Sunday it is. I do a gear check, a bait check, and get things ready. Sunday arrives and, after a hearty breakfast, we are off. I bring a load of rods, Jawjackers, tip ups, tackle, and a variety of baits; from small frozen fish, to larger herring. I’m not leaving anything to chance. 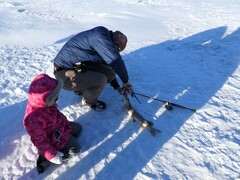 There were lots of willing pike biting our hooks.

The lake is practically devoid of people, which is not a surprise given the crazy wind we experience on the drive out. It’s sunny alright, but windier than stink. The forecast didn’t mention this. I get a message. Vien and Marielle are also on the lake. We dress kids from head to toe, and then drop heat packs into boots, into mitts, and make sure each child is wearing a neck toque, a head toque, and look happy.

It has the feel of an Arctic expedition. We head out. On the lake, sheets of snow and ice are sweeping across its frozen surface. It’s hard to stare into the teeth of it, but that’s the way we need to go. We occasionally stop to turn our backs and catch a breather. It takes another 10 minutes to reach our spot, and we drop our gear. Marielle and Vien are 50 meters to the west. I regret not bringing the tent, something we could anchor to the ice and keep ourselves sheltered, but that’s ship has sailed. We make do. 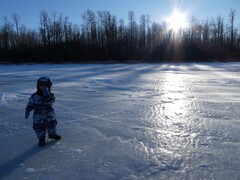 Bundled up and ready to fish.

I grab the auger and punch through a dozen or more holes. "This should do," I say to no one in particular. I grab my jigging rod with a Firetiger spoon and think, "what the heck," and drop it to the bottom eight feet below. I jig it for perhaps 20 seconds and the rod doubles over. The bite is hard and takes me by surprise; no hookset needed. "This is a good fish," I say aloud, and fight the fish. The pike pulls hard, and several times it pulls line from my reel. I am patient and keep pressure. Twice I think it is coming up the hole, only to see my rod dive down, followed by a swell of water coming up the ice fishing hole. I am amazed. This is a determined pike. I keep pressure on and again, the fish is near the hole. This time I see the unmistakable jaws of a toothy pike rising up from below. It’s time and I reach down, get a hold of that sweet spot just in front of the gills and under the jaw and lift. Out comes a near 70 cm pike. "That’s a keeper," I say proudly, and put him on the ice. 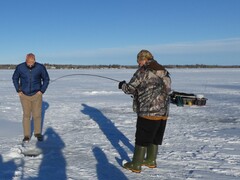 I put down the jigging rod and decide to get to the task at hand, which is putting out Jawjackers and tip ups. I get one Jawjacker rigged, and I see a commotion. Marielle’s got one on. In time she pulls up a twin to the one I caught. Cedar runs over to check it out, as does Melanie, who takes a couple pictures for them. By now I have the second JawJacker out, and thoughts of jigging up that pike pull me back to that rod and Firetiger spoon. I grab the rod for a moment, but then put it down when I see Fraser battling the wind and snow. It’s tougher being small and closer to the ice, so I kneel down, put my arms around him, and become his wind shelter. He is happy. 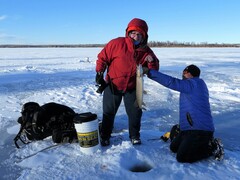 A happy crew! Marielle and Vien team up on this nice pike.

In short order the JawJacker goes off, and we jump on this one. This is also a keeper, so we keep it. I quickly realize that in spite of the weather, the bite is on, and there’s no need to max out the number of fishing lines. Even though I have more Jawjackers, and Windlass tip ups, which would be very effective on this windy day, I leave it at the two JawJackers and one jigging rod and keep things simple. It’s much easier to manage in the wind. Basically we are really only fishing the two JawJackers, and every now and then someone picks up that jigging rod and hole hops, usually catching a pike in short order. 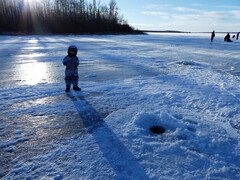 Cedar, eager to catch her keeper pike, is all over the bites and catches two in a row that are just shy of legal, then she hits something bigger. This one has the look of a better fish. The rod pulls, rather than shakes, and Cedar is working hard to reel it. I watch from afar with Fraser. Cedar fights the fish, mom at the ready to pull the pike from the hole. It takes time, but they win the battle and a beauty of a pike is pulled up. Cedar proudly cradles her fish and runs over to show us. She puts it by our other fish and proudly announces, "Mine is the biggest," which it was. It was a hefty pike pushing 70 cm. 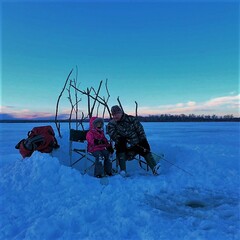 We keep fishing and catch more. The bite is on, and stays on, right into the evening light. With the sun dropping into the horizon and temperatures starting to drop, we call it. It was a windy day, but we did it. The family went pike fishing, we had a ton of fun, and brought some pike home for future chowders, and battered fillets. I couldn’t be happier.