Rollin’ on the River

Over the past couple decades - when Alberta anglers were under the equivalent of a fisheries management COVID lockdown - the province underwent an amazing walleye renaissance.
From pickerel pandemic to walleye wonderland as populations came fighting back - thanks to rigorous harvest restrictions, successful re-stocking programs and spawning closures.

While at the same time walleye angling technology has taken a quantum leap with sonars, GPS locators and hydrological mapping (both paper and on-line) becoming readily available, taking much of the luck-and-hope factor out of it.
So when in times past during the "good old days" grinding all day for a six-fish catch was considered a fine outing, now triple-figure sessions on accessible fisheries little more than an hour’s drive from a million population are not outside the realm of possibility.
I wouldn’t say we are blessed in the province of Alberta, which has a limited number of waterbodies with suitable habitat to rear walleye and a frustratingly slow growth rate here at the climatic outer limits of the country’s most popular game fish.
But it sure is a lot better than when the emergency recovery program was implemented on numerous "collapsed" fisheries by Alberta Environment and Parks managers. 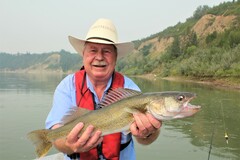 It’s a matter of finding a concentration of contours on a lake profile map - indicating a shore-line drop-off or a mid-lake hump - anchoring on the structure, dropping a jig baited with a frozen shiner overboard and chances are good you are in walleye country.
The walleye dynamic, unfortunately, changes exponentially when the water isn’t static but comes rushing at you - sometimes with a surprisingly high velocity. River walleye are an entirely different ball game requiring a whole new suite of tactics, terrain and technologies to master before successful angling can happen. My first experience with river walleye angling was back in my high school days on the bank of the Pembina River where a small creek spilled into the main stem. There was enough volume in the little feeder to create a perceptible line where the two currents came together, which extended several metres down the river.

My bait of choice in the day was a frog, several of which I had earlier captured from an oil road ditch.
(Frog populations, of course, are in trouble these days and rigorously protected. So don’t even think about it.)
I threaded the little amphibian on a treble hook, lobbed the rig into the flow, opened the bail of my push-button spincaster and let it bottom bump down the meeting of the waters. Giving it a short pop whenever it hung up. Half way down the run the bait stopped and my line began slowly moving into the main current. I set the hook and to my surprise a fish was attached to the monofilament. It wasn’t the biggest walleye that I’ve ever caught. But it was monumental none-the-less. And a pivotal lesson that all walleye weren’t born alike. Rollin’ on the River clearly required a different tool-box of tactics and technology.

Walleye don’t begin appearing in abundance on Alberta rivers like the North Saskatchewan, Athabasca, Red Deer, Bow, South Saskatchewan and several of their larger tributaries until those mountain-raised streams have hit the flat land, increased in temperature and taken on some turbidity. That means big and, for an entry-level angler, very intimidating. So much water and so little time. 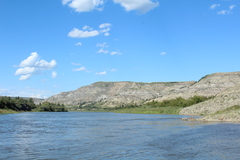 Making heave-and-hope angling pretty limiting. Walleye, unlike trout and pike where loneliness is happiness, are social animals and tend to hang out in groups. Which turns finding them in a river scenario even more problematic because most of the fish are concentrated in pockets not spread throughout the stream.

Unless you can locate a "seam" as happened in my Pembina walleye awakening. A walleye seam is defined as anywhere where two currents interface. And can be a break created by a land slip, log jam, rock outcrop, creek mouth or simply a significant change in water depth. Which required the angler to "read" the water, keeping an eye out for bubble lines, foam mats, eddies and other disruptions where a noticeable current change is visible. Often it can be nothing more than a subtle change in water colour. Because a river is a dynamic thing the seam will also be active and cast placement is always going to be approximate. Sometimes prime walleye holding locations may be kilometres apart. And because these rivers are big and often the banks hold treacherous bentonite oozes, bank anglers are faced with additional challenges.

Probably explaining why river walleye are an under-utilized angling resource with most pressure confined to a limited number of access points. The best way to even the odds in the angler’s favour is to float the river. Either by drifting with  rubber raft, pontoon, canoe, kayak or drift boat, or to run-and-gun in a power craft. Except not any boat with an engine. Propeller powered vessels on prairie rivers with shallows, silt bars, sudden shoals and rock gardens are a recipe for a bent prop and a long, unpleasant night on the river.
Jet boats are the ideal platform for big river walleye angling. But they also come with a hefty price tag  and complex maintenance regimes.
Mobile anglers can cruise the river and high-grade the honey holes - skimming over many klicks of unproductive looking water.

Once you have located a promising piece of current break, your next task is to find the "zone". The precise place in the vast expanse of water where the walleye are likely hanging out. Sometimes referred to as the "creek inside the river". Walleye prefer soft current to heavy water - either along the visible seam or just inside the slack water, where they can conserve energy while exploiting the buffet of food sources washing down the flow. The zone is also the bottom few centimetres or so of water . While the fish do suspend in the current occasionally most of the time they will be found tight to the river gravel. 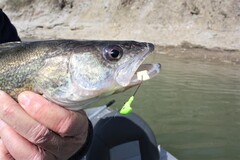 This walleye fell for a chartreuse lead jig baited with a frozen shiner.

To get into the zone you have to place your bait/lure on the deck and hopefully keep it there, but not all seams are walleye zones. The minimum depth of good river walleye water is at least a metre and a half and an optimum of three or more metres. That’s where a boat-mounted fish finder comes in handy. What’s more, while walleye structure in lakes remains relatively unchanged from one year to the next, walleye rivers are in constant change and turmoil and water levels fluctuate constantly. So be prepared to go with the flow and move locations.

Walleye lures come in many configurations and adaptations. But most are engineered for lake angling where the additional intervention of current is generally not a factor. The dynamics of flow is something the river walleye angler is constantly trying to compensate for and battle against. Walleye want the bait at eye-level. Add the element of turbidity and an accurate presentation becomes more essential to getting consistent hook-ups. Working the slack water on the inside of the seam is one way to achieve this. Then slowly retrieving with a stop and go crawl along the bottom. So is allowing the bait package to free-spool down the run. Sometimes the bite comes as a solid bump. But it can also be a quiet change of line direction, pause or even an extra-sensory feeling that something, somehow has changed. In either scenario time is one your side. And it’s often wise to give the walleye a good long while to get the bait set in its mouth before raising the rod tip and pulling the trigger.

While I admire those lawn-chair-bound bank anglers with their forked sticks rod holders and bell strike indicators - if nothing more than their stoic patience. I need a little more action in my river walleye fishing.
My preferred set-up is a spin-caster rod with a sensitive enough action to feel the subtleness of a walleye bite but with enough backbone to pry a fish out of heavy water. River walleye angling is always going to be a compromise.
As mentioned earlier walleye lures come in a plethora of configurations - many of which are nor particularly adaptable to river conditions, where getting the bait down to the strike zone is of paramount importance. 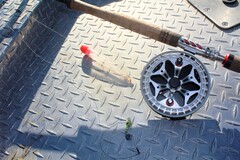 A centre pin rod set up.

My go-to is the good old chartreuse lead jib with enough mass in the head to hold it down in the flowing water.
Add to that a frozen shiner minnow threaded on the hook through the eye and out the top of the back, or a wiggly tail in the alternative in rivers like the middle Red Deer where a bait ban in in effect, and that’s about it.
Other jig colours like yellow, hot pink, chrome or black are effective also. But the key to success is keep it deep.
Another adaptation is the technique called "centre-pinning", which is basically what I was doing during my Pembina River epiphany those many
years ago. 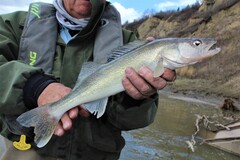 It can either be done by opening the bail of a spincaster reel allowing the line to free-spool as the jig drifts down the run.
Or with a specialty rod and reel combo first developed by West Coast steelhead anglers where the weighted bait is suspended under a float allowing for a drag-free drift through the holding water for sometimes 50 metres or more. Whenever the float bobbles, hesitates or dips, activate the drag and set the hook. Chances are a jacked-up river run walleye will be battling at the end of the line.