5 Ways to Catch Your Trout

The great Paul Simon’s big hit "50 Ways to Leave Your Lover" offered a live-well full of advice on how to untie the knot and get back in the game.
"The problem," Simon said, "is all inside your head."
Then told the splitzville couple to "slip out the back, Jack, make a new plan, Stan and hop on the bus, Gus."
If only catching a trout was that straight forward.
It’s the sense of uncertainty and doubt that makes angling so compelling and sometimes frustrating whenever you load your rod and fishing gear in the rig and drive a couple or more hours in anticipation that there may be a hungry fish waiting at the end of the road. 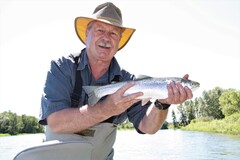 Because angling is about the only sport I can think of when it’s never certain whether a game will happen once you get there. As we go about our business in Trout Country we have all seen star-crossed entry-level anglers standing at a bridge casting randomly into the surge pool under the faint hope that if they persist long enough the angling Gods will take pity and they will get a hook-up. It’s the angling version of buying a lotto ticket.

I’m about to enter my seventh decade of pursuing trout, grayling and mountain whitefish on Alberta foothills and boreal streams. And I doubt there’s ever been a time on the riverbank when I wasn’t confronted with something new.
Which is the primary reason so many Fishin’ Holers have made angling their life-long passion. It’s the lure of the unknown and the uncertainty of success. And when you do encounter one of those epic days when it seems you can do nothing wrong and the fish come willingly to your fly, it only makes it so much sweeter. It’s called the drug of the tug.
But like Paul Simon says, before you hop on the bus, Gus, you need to make a new plan, Stan.
There may be 50 ways to leave your lover but here are 5 proven ways to catch your trout.

The underlying axiom of angling - especially when using an artificial lure - is deception. Attempting to fool a creature with a brain the size of a pea - but often it seems with a PhD education - that the hook wrapped in feathers and fur on the end of your line is something good to eat. Sometimes it’s not as easy as it sounds.
Trout are particularly sensitive to how your fly or lure looks. And more specifically how it moves. 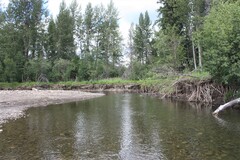 Any deviation of movement from the natural food source can make a fish suspicious.
So when presenting a fly in a dead drift situation, either as a dry fly or nymph suspended under a strike indicator, a natural float is essential. Awareness of conflicting currents which impart abnormal movement called "drag" is essential.
Compensating for drag is done by roll casting loops of fly line either upstream or down which is called "mending".
A natural presentation can also be enhanced by being aware of your casting position so conflicting currents can be minimized to allow a drag-free float to be extended.

Old school wet flies, Woolly Buggers and streamers are generally cast across the current then allowed to swing around and down. Again presentation is important so the fly is drawn through the fish’s field of vision close or near the bottom - simulating a swimming bait fish or emerging aquatic fly.

Presenting a credible facsimile of a trout or grayling’s food source is the second step on your path to success.
Some anglers carry literally hundreds of different fly patterns and sizes with them in anticipation of having to present a fly that’s a reasonable imitation of the mayfly, caddis fly or stonefly present on the water. Alberta trout at times can be super selective. Other times on less fertile streams when fewer natural flies are present, generic flies such as Variants, Humpies or Stimulators, which represent many flies but don’t exactly replicate any of them, are effective fish getters. 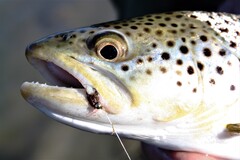 This brown trout fell for a dead-drifted bead-head nymph.

In this scenario fly size is often more critical than precise colour and design.
So is tippet selection. Fly rodding is always going to be a compromise between leader diameter and breaking strength.
Tippet-shy trout may require 6X to deceive them. But cranking a big brown trout out of its log jam lair might call for 3X. Or maybe stronger.

Execution
There’s an old contractor’s expression about using "the right tool for the job." Trout fishing is no exception.
Jacked-up, over-powered fly rods are not my weapon of choice when delicate casts and pin-point presentations are required.
The same goes for dinky, little wisps that have limited range and equally diminished back bone.
Fine for working up a little foothills creek on a sunny summer afternoon when a seven-inch Athabasca rainbow is the biggest fish you will likely encounter. But necessarily your go-to rod under general angling conditions.
Rod selection is another of those trout angling compromises that must be confronted. 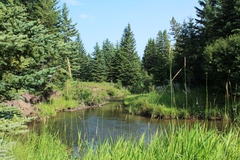 Central Alberta spring creeks are fine waters to test your skills. But the rewards are great

A 5-weight, 8 ½ graphite is probably the most versatile for a majority of Alberta angling situations. With ample spine to battle larger trout but with enough subtly to deliver soft and accurate presentations.

This may be the most challenging of the 5 ways to catch a trout. For somebody new to fishing being presented with a broad sheet of apparently featureless water can be daunting.
Maybe even a little scary. Fish are rarely present in all the water but prefer to concentrate where three conditions are present - nourishment, shelter and protection. Sometime all three at once.
Trout will stack at pool heads, along current concentrations like foam lines or interfaces between fast and slow currents or deflections around in-stream rocks, timber or trailing vegetation.
These areas concentrate food sources. Fish are most vulnerable to angling during their active feeding periods and will move into these feeding lanes. They are also confined to the streams they were born in and are at all times susceptible to predators like ospreys, herons, mink or otters.

So self-preservation is a big part of their lives and they rarely will be far from shelter. Depth is certainly a major factor. But so is cover - whether it be undercut banks, streambank vegetation or fallen timber, corner-pool log jams or spring creek weed beds. Protection is the third component of location. By this I mean defense against the forces that gang up against them. And the most dominant one in a trout’s world is the force of the current and are in a lifelong battle to hide from it.
Current breaks - whether instream deflections about and behind rocks or "seams" where slow and faster-moving water meets - are prime areas to concentrate fish. So are zones where fast and shallow water drops into deeper, less turbulent flow.

They say that the best time to go fishing is whenever you’re on the river. True.
But clearly there are times when it’s better than others.
A brown trout stream under a blazing August sun can seem as likely to hold trout as a southern irrigation ditch.
But when the sun goes down and the night hawks come out things can change dramatically.
The remains of the day is one of the times when fish throw caution to the wind and become super active.
Cloud cover can also trigger feeding activity. 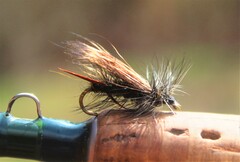 Stimulator dry flies are an excellent generic pattern that at times trout and grayling can’t resist.

While large occurrences of aquatic insects or the presence of super-sized bugs - like green and brown drake mayflies, salmon flies and golden stone flies plus windy-day grasshoppers - can also bring on frenetic fish activity.
A focused fish is a catchable fish. These large fly emergences - sometimes called "super hatches" or "blanket hatches" - are not season long. But are focused over short periods which are plotted on some popular rivers with "hatch charts." 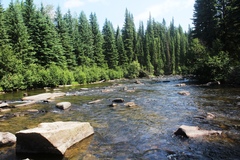 These are the 5 effective ways to catch a trout and it’s all inside your head.
But when it comes to leaving your lover, I’m afraid you’re on your own.