On the Road Again

They say that the great Willie Nelson wrote his enduring hit On the Road Again - where he extolls the "life I love is making music with my friends" -  on the back of an air-sickness bag. Which, when you think about it, is pretty iconic. In it the Red Headed Stranger sings about "going places that I’ve never been" and "seeing things that I may never see again." And this adventure wander-lust doesn’t just apply to playing music in an outlaw country band.
The legendary Colorado angling writer John Gierach, in his compelling book The View from Rat Lake, also describes the comfort zone known as "home waters."

A piece of fishing territory that "infiltrates your consciousness in a distinctive and comfortable way."
"It becomes an inescapable part of daily life," Gierach wrote about that little slice of angling paradise of which you have developed an intimate relationship with over time. A place where you have worked out the walleye structure and trout corner pools and gained a friendly connection to, which only the investment of time and effort can bring.
Usually a short-enough drive from home where you can easily day-trip or slip out after work to spend a few therapeutic hours on the water while the snipes and night hawks boom overhead. But after a while too much comfortable familiarity can breed contempt. You begin to question, is there more than this out there? And even the 20-inch rainbows of Muir Lake or 30-walleye sessions on the Pigeon Lake Provincial Park drop-off can lose their wow factor. 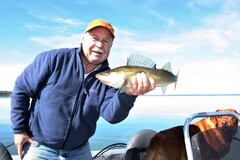 Like Willie’s band of gypsies going down the highway, you get a hankering to be on the road again.
Because while home waters are an integral part of the angling pilgrim’s progress the uncertainty of loading your rig and heading out to exotic and unfamiliar waters is also an essential component of the angling dynamic.
Where the challenges of getting there can be as much of the memory bank as the fish caught (or not) after you arrive at the water destination of choice. There is something cosmic and daunting about pulling up to an unknown river or mystery lake and saying to yourself, "OK, let the adventure begin."

A road trip destination is whatever you make it. Anywhere from an internationally renowned river like the Bow below Calgary to a diminutive foothills trout stream or boreal grayling creek that you spotted while "blue-lining" old Forest Service maps. Angling art is in the eye of the beholder, but there are some that stand out as classics. Alberta and western Canada are blessed with many. 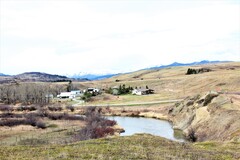 The Crowsnest region in the extreme southwestern part of the province has a long and deserved reputation as a destination and has developed a trout angling infrastructure including two full-service fly shops and several guide services. Plus a string of historic towns from the coal mining era. The big four are the Oldman, Castle, Waterton and Crowsnest rivers plus a former quality trout stillwater at Police Outpost Lake and numerous tributaries. And if that doesn’t satisfy your trout lust the close-by Elk River drainage beckons on the western side of the continental divide. Although access is complicated by British Columbia’s classified waters system which unfortunately discriminates against out-of-province fishers. 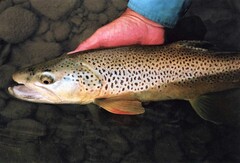 Jasper National Park is another great angling road trip. Not only featuring chironomid fishing for rainbow and brook trout at Maligne Lake but aggressive pike on big streamer flies on Talbot Lake. Winter angling for trophy bull trout on the Big Athabasca River - diminished to almost intimate trout stream proportions when the glaciers stop melting - can also be a gratifying experience. Angling in the magnificent Rockies is worth the drive itself. 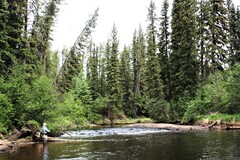 The run up Highway 40 from Hinton to Grande Prairie intersects numerous Arctic grayling and trout rivers while the Cypress Hills offers trout fishing in Battle Creek and several reservoirs - including the superior big trout fishery of Bullshead - in a part of the province where you would least expect it. Plus a remarkable sub-alpine meadow landscape that showcases everything with the exception of mountains. Alberta’s Swan Hills is another on-the-road-again destination with grayling in the rivers and brook trout in the lakes. The drive up Highway 63 to Fort McMurray is worth the trip with grayling in the House and Hangingstone rivers and walleye and pike at Winifred Lake. As is the old Coal Branch Highway southwest of Edson. 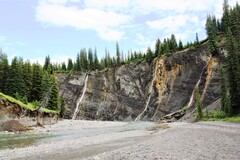 The South Ram River is one of numerous trout and grayling streams intersected by the Alberta Forestry Trunk Road.

But maybe the most iconic angling road trip of all is the famous Forestry Trunk Road that pretty well parallels the foothills of the Rockies from Grande Cache to the American border. This magnificent route of mostly bone-jarring gravel was dubbed "Alberta’s Trout Highway" by the late/great angling author Barry Mitchell. Truly a highway to heaven. And I haven’t got to all the pike and walleye destinations of the north or the southern irrigation storage lakes. While the Red Deer River that winds through the badlands around Dry Island Buffalo Jump provincial park is worth the drive for the transcendental scenery alone. The fly fishing for goldeye isn’t too shabby either.

I guess we’ve all been on one of those angling adventures where the truck got stuck, the river rose into the willows, the tent leaked, the food was at-best border line and the flies and lures we brought along were exactly not what the fish wanted. The road warrior stories which a trip like that produces are more tales of survival and camp life calamity than I-phone hero selfies of big fish and happy anglers wearing goofy grins.
Where you ended up having fun despite of yourself. To insure yourself as much as possible against the uncertainty of the adventure nothing beats a little preparation. 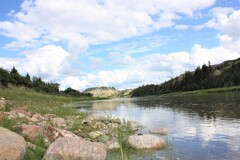 First things first is to go over your angling gear and make sure it’s in perfect working order. Nothing makes a road trip go sideways faster than opening a rod case to find a broken rod tip or a missing fly reel. The same thing goes for flies and lures. Same with tippet and there’s nothing worse than spending a weekend in leaky waders.

Accommodation is next. If you are moteling-it or provincial-park camping best to get a reservation. Are all the tent poles still in the bag? Enough propane for the stove and is the axe sharp? Better check. Better still make a list. If you are self-catering an adequate supply of good food and drink is an integral part of the angling road trip. What happens around the camp fire at night is often just as vital to a successful trip as what went down on the water during the day. A well-stocked first aid kit is not a bad idea also.

Work out the menu and make sure you have enough cooler capacity to keep it fresh. Also have a program in mind for sanitation. Leave nothing behind but your boot-marks and maybe a clean fire ring.
Also stay flexible. Arriving at an angling destination to find the river blown out is never a good start. Have a Plan B, or even C, in mind in case you need to run and gun. The Alberta Environment and Park ministry offers a webpage of real time stream gauges and comparative levels - where you can check stream flows before leaving home - to take a lot of the risk out of a road trip. An angling road trip is whatever you make it. 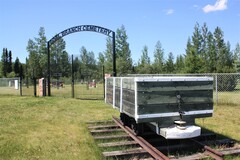 The historic Coal Branch Highway is another of Alberta’s iconic angling adventure roads.

It can be living in the luxury glamping of Jasper Park Lodge while fishing Maligne and Talbot by day, camping in a random site somewhere in the forestry or yomping up a mountain trail to a high-altitude golden trout lake with your entire outfit on your back.

One of my early memories was hitchhiking to the Coal Branch while in high school with nothing but a bargain store pup tent, an aluminum frame pack and a fly rod. If I recall I didn’t catch many fish. But the experience remains laser-printed in my memory five decades later. Because, like Willie, I just can’t wait to get on the road again.