The summer weather predictions for most of North America, which seem to be holding true so far, are for hot and dry summer conditions. In fact as I write this the province of Alberta is headed into 10 days of 30C temperatures. The western United States is also experiencing heat waves. This is not good news for trout that prefer cold water temperatures.  Combine this with the influx of new anglers due to COVID and it leads to overheated and overfished trout streams. There are ways you can avoid both the crowds and stressing out the trout struggling with higher water temperatures. 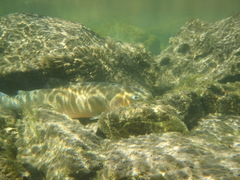 Trout are cold blooded creatures, which means that water temperature controls their body temperature. When temperature rise, 7C to 18C the trout's metabolism increases and they will actively feed, once that 18C temperature is reached their metabolism slows and feeding diminishes. The warmer the temperature the less oxygen is in the water, sustained periods of high water temps affect growth rate, strength and digestive functions and ultimately mortality starts to occur. 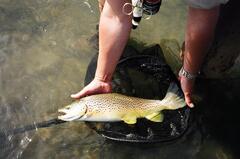 Careful handling will help with a successful release.

During midsummer the state of Montana institutes what it calls "Hoot Owl" regulations on several of its’ rivers. Fishing is closed each day at 2:00 pm and remains closed until midnight. These restrictions allow anglers to catch and release trout before the water gets too warm and puts undo stress on them. With water temperatures swinging as much as 12 degrees Fahrenheit in one day this gives the trout a rest during the warmest part of the day. Even if you are fishing where it is not the law anglers should be very conscious of water temperature when they’re fishing and consider taking a break if it gets too warm. Carry a thermometer with you and check the water temperatures regularly, temperatures can change greatly over the course of the day measure it often and consider quitting once the stream temperature gets past the 18C mark. 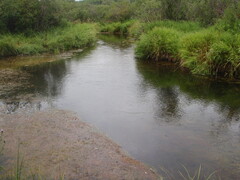 Streams that have had streambank restoration are likely to have lower water temperatures.

There are certain areas of rivers and streams that will provide the angler with opportunities even on the hottest days. There are also types of rivers and streams that provide cooler temperatures and higher oxygen levels than others. Spring Creeks, which originate underground, are often cooler and more temperature stable than freestone creeks and they often have undercut banks which provide shade from the hot sun.  Even they will warm up as they travel downstream so the closer to the headwaters you can fish the better. Tail waters below bottom draw dams are always good areas as the water is usually coming out of the dam at quite a cool temperature. Streams with heavy cover that provide shade can also be cooler than those with little or no shade.

Tributaries are often, but not always, cooler than the main branch of a river or stream and are worth checking out. If possible consider fishing further upstream, closer to the headwaters, while the trout may be smaller, but still a lot of fun and  the amount of other anglers you will run into will often be reduced. Underground springs also occur and will certain areas of streams, taking  the stream temperature often in different locations will help you locate these areas.

Oxygen also plays a big part when water temperatures rise. Warmer water contains less oxygen and causes trout to stress. The warmer the water the more oxygen trout need. Look for areas such as waterfalls, boulder gardens, below dams, anywhere that the water gets aerated and more oxygen gets introduced into the water. The angler should also consider fishing early morning and in the evenings to take advantage of the trout when they are most active, and the cooler water temperatures will cause less stress on the trout.

Areas that have had stream bank protection or rehabilitation are also good places to target. These areas  have often had trees and shrubs planted that provide shade and keep the sun off the water. These areas  tend to have less widening and shallowing of the stream due to livestock, tree and shrub removal etc. Keeping the stream narrower and heavily shaded can make up to 10C difference in water temperature. Adding boulder gardens will help aerate the water providing much needed oxygen as well as places for insects to live. 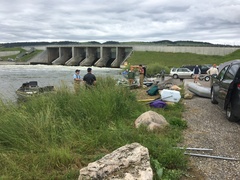 Tailwaters below dams will often have cooler more oxygenated water, and crowds.

The latest mantra on the social media sites these days is "keep them wet" which refers to the trout you have caught and are releasing. It is always important to handle any trout that you plan to release carefully and get them back in the water as quickly as possible. If you need to take a photo keep the fish in your net under the water and have everything ready before lifting him up for a quick photo. With warm water temperatures it is even more important, or if it has been a long fight consider forgoing the photo and concentrate on reviving the fish and releasing it as quickly as possible. Trout build up lactic acid when stressed and even though they might look fine swimming away too much stress and they may not survive. With less oxygen in the water it is like you working out at higher elevations, it becomes much harder to recover and catch your breath due to the lack of oxygen. 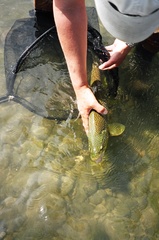 Keep your catch as wet as possible after you have landed it.

The length of time you fight a trout is also of importance. This is not the time for light rods, leaders and tippets. You should be fishing with equipment that is going to let you expedite the fight and land and release the fish as quickly as possible. Fluorocarbon leaders and tippets will let you use a little larger size than normal due to their invisibility. Play your catch quickly, like I always say, "Land it or lose it"

You may have to head to the lakes if the trout streams get too warm.

At some point you may have to just give the rivers and streams a rest and fish trout lakes or even target warm water species such as Walleye and Pike. Don’t despair fall will be here before you know it along with cooler temperatures and hungry and hopefully healthy trout.