The McLeod is my premier mountain whitefish stream. It is also a great grayling fishery, with the occasional rainbow and bull trout thrown in. On hot days, it’s the family swimming hole. It’s clear, clean, cool water and abundance of pools is perfect for a summertime dip. On those warm days, I put on my life jacket, help my little ones get their life jackets on, and we have at it. This is about as refreshing as it gets, and a perfect way to beat the heat.

The McLeod is unassuming, and at some point when I wasn’t looking it really grew on me. And stuck. It’s become one of my favourite destinations. The section of stream I like most is west of Edson, and filled with riffles, pools, rocks and runs, running over cobble, and prolifically productive. In and around those rocks are sculpins, dragon fly nymphs, mayfly nymphs, caddis fly larva, and plenty of stone fly nymphs, especially the larger black and the golden ones. It’s a buffet for foraging fish, which is probably why McLeod River mountain whitefish are as about as healthy as they come. 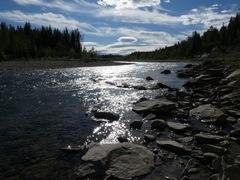 The McLeod is beautifully scenic. 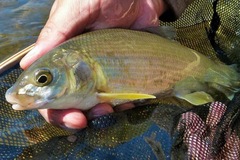 There is a healthy mountain whitefish population in the McLeod.

On the flipside of dunking nymphs, there is a well established dry fly game for grayling, and they willingly come up for pretty much any dry fly floated over their noses. They are very opportunistic. If, however, I am looking for a couple, or few patterns to have with me, it would be a parachute adams, a caddis, a light cahill, and a foam ant. Yes, for real on the ant thing. For whatever reason, grayling seem to loss all self-control when an ant comes floating by.

These flies and presentations will get you into the whitefish and grayling game quite handily, but if you are looking to get more quality bites, and perhaps more bites from bulls and bows, set the small stuff aside and chuck streamers. Most any streamer pattern will do, but something that looks like a fish in the one to two inch range is a definite winner. One day I decided to go big and chucked an oversize salmon streamer and had a massive 22 plus inch trout come out of the depths and smoke it. I missed the hookset and that was that, but it showed me that it is worth chucking big stuff for the big bite. 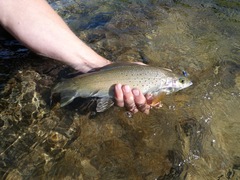 For the spin guy that wants to forgo fishing flies, a small panther martin spinner is great, as is a small Len Thompson spoon. Both will generate bites, but as is the case with most hardware, their staying power is limited. Their flash and action means a quick response, and there will be a flurry of action at the start of fishing a pool or run, but when that dries up, and it will, the best course of action is to get your walking boots on and head to the next pool. If, during you casting, you see a big trout or grayling show interest, and this is where polarized glasses are worth their weight, rest them and come back later and toss something different. A lot of times you will catch that fish.

The most productive way to catch fish on the McLeod, though, is by getting your fly, plug, spinner, or spoon down to the bottom. Mountain whites make a living rooting things out of the rocks, so that is where they are looking for food. The same can be said for all the other fish. They too, look for most meals along the rocky bottom. And while drifting a bead head fly deep behind a bobber is an excellent method for prospecting and catching fish, there are other ways. 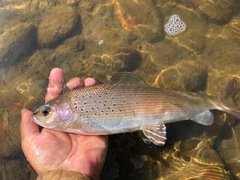 Fish close to the bottom and the bites will come.

If the river is wide and the pool is large, I will cast out what I call my nail and nymph rig. It’s the same nymphs I mentioned before, but now they’re tied off a dropper a foot or so up the line, using a 3 to 4 inch nail as weight. This rig assures me that my gear is on bottom and ticking along, exactly where trout, grayling, and whitefish live. The rig will ride the bottom substrate, occasionally hanging up, allowing the fly to hold a little while more in the strike zone.

If the water is small and I’m fishing pretty tight, that is close to where I’m standing, I’ll run a split shot and nymph instead of the nail and nymph. The difference is I’ll try to attach just enough split shot to get the fly down to the bottom where I can feel good contact. I will never cast upstream with this rig, as it easily gets hung up, but instead I will cast across, or slightly downstream. Most cast are short. This rig is a more precise delivery of the same fly, and because I keep all the slack out of the line, I detect bites quite readily. 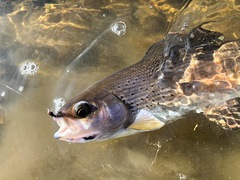 As with every fly rig, when I get a bite is lift the rod. That amount of pressure is perfect for setting the smaller sharp hooks of flies. Once the hook is set, I deliberately take my time when reeling the fish in. In my youth I lost a great many fish by trying to horse them in. Put simply, the extra pressure exerted when trying to pull a fresh and lively fish in was often enough to pull the hook right out of that fish’s mouth. I now take my time, let the fish play itself out some, and they come in much more willingly, and few shake the hook. Patience pays off. 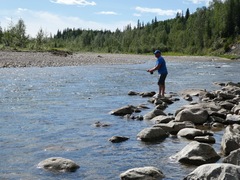 The McLeod is a beautiful place to wet a line.

There’s a lot more to say about the McLeod, and the fish that call it home, but I’ll leave it here for the time. It’s a great fishery, and outside of the super easy access points, it is hardly fished. It will surprise you with how scenic it is, and how good the fishing can be when you decide to cast a line.