To me fall is a conflict of emotions as far as fly fishing goes. Many anglers, myself included, consider it their favorite time of year, but with winter right around the corner the number of days to head to the stream are dwindling and a sense of urgency takes over. Rivers that have seen spring floods turn into the dog days of summer with high water temperatures have now cooled and are at their lowest and clearest. You will rarely find anything but good conditions in the fall, although this year we did have an all day/night rain dirty up a feeder stream which ended up putting the river off colour for a day. Many anglers have turned their attention to hunting, kids are back in school so the number of people on holidays has dwindled. Trout that have been spread throughout the stream are now moving into their over wintering holes where they will wait out the winter. If one species of trout begs to be fished for in the fall it’s the Cutthroat trout. Not only do they match the golds and orange colors of the turning leaves but they also feed with abandon, no doubt anticipating what awaits them in the near future. While browns and bulls are aggressive and brightly colored as they prepare to spawn, I leave them alone to do their thing, Cutthroats will do just fine. 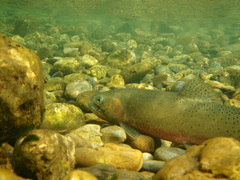 Streams and rivers are low and clear in the fall.

Cutthroats are a native species to the west and have become the favorite target of many fly anglers. Once considered the most gullible target of the trout, catch and release on many western streams has educated them. They are still the most willing to rise of all the trout but getting them to eat is no longer a slam dunk.  While they still might not be as wary as a brown trout the days of plopping a Royal Wulff or any old Green drake pattern into the middle of a bunch of feeding Cutties no longer works. New patterns seem to appear every couple of years and for whatever reason they seem to work. For the last two seasons in S.E. British Columbia purple has seemed to be the color. Last year I had equal success with a big Purple Chubby Chernobyl and a size 16 purple parachute ant. This year the ant dominated over all other patterns including the Chernobyl. Seasonal favorites aside I always lean towards terrestrials in the fall, hoppers are still around, or at least the memory of them if we've had a killing frost. Ants and beetles are always around and are go patterns for me in the fall. 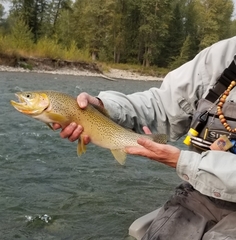 Cutthroats match the colors of fall.

I stick with a 6 weight rod and line, even in smaller streams, you can get away with lighter rods and lines but most of the places I fish for cutthroats are notorious for their strong winds. As it is all catch and release fishing in these areas a little heavier rod helps me not only deliver the fly better in the wind but also land the fish quicker. Being able to put a little more pressure on the fish when fishing from a boat is important as you may not always be able to follow the fish as you when walk and wade fishing for them. I like to land and release them as quickly as possible. 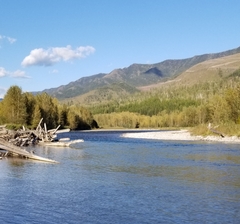 Fall is a glorious time to be out fly fishing.

I used to think that using fluorocarbon tippet for cutthroat wasn't necessary but I'm beginning to think with all the pressure being put on them it might be the way to go. While floating the Elk River in BC my friend Nick, who was using fluorocarbon tippet, definitely out fished me. I  like to think that it was my rowing skills that put him in the best spots, but I doubt it as he rows every bit as good as I do. In smaller streams like Alberta's Oldman or Livingstone River the use of Fluorocarbon is even more of an advantage as finesse is more important in these conditions. Leader length is also a consideration, I like a nine foot leader, with 12 - 18" of tippet of the appropriate diameter for smaller terrestrials and a 7.5" 3X or 4X leader with no tippet for the larger hopper and Chernobyl type patterns. The shorter, stouter leader will lessen the "helicoptering"  effect that causes twisting of thinner longer leaders and the fishare not as spooky with these big flies. 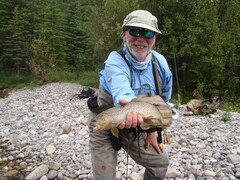 It's easy to see how Cutthroats got their name.

When walk and wade fishing in the fall not only is the water low and clear but, making a stealthy approach important but also the angle of the sun will play a greater part in your approach. With the sun being lower in the sky you will cast much longer shadows than it the summer. Keep the sun in mind when you approach the stream and approach from a different angle if possible or in the very least crouch to make yourself smaller. Leaves falling off of the trees can also hamper your getting the fly to the fish. There is no easy solution to this problem, when floating you can avoid the heavily treed stream bank, if there is only one, but this only works occasionally as eventually the leaves will spread out across the stream. The best solutions is to plan your casts to land in between the densest part of the flotilla. The bonus is that with the leaves come various bugs for the trout to eat, like ants and beetles. Also the same winds removing the leaves off the trees will be sending grasshoppers into the stream.

The trout aren't the only things getting active in the fall.

In the fall there is no need to hit the stream early, you won't find that cutthroat start getting active until the water starts approaching 50^F. Same thing in the evening, as the sun lowers in the sky, and both the air and water temperature start to drop, unlike summer when this might be prime time, the cutthroat will get sluggish and your dry fly efforts will be largely unrewarded. Another consideration for fall cutthroat fishing is wildlife. Bears are feeding in earnest to ready themselves for their upcoming hibernation and are out and about at all times of the day. Also as the rutting season gets under way Elk, Moose and even Deer can become dangerous. Be aware of your surroundings and give a wide berth to any wildlife encountered. Carry bear spray and know how to use it, even when floating rivers. 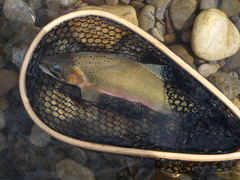 There's still time to enjoy some fall fly fishing before the snow flies.

Have it on board and have it on you whenever you leave the boat for a bathroom break, lunch break or when you stop to fish a run on foot. Also make sure it is handy when you are drifting as you never know what is around the next corner, things can happen pretty quick so be prepared. On our last float we heard a crashing and then suddenly a cow Elk came flying out of the bush, down a 4 foot bank and out into the middle of the river. It was far enough downstream and the river was wide enough at that point that is wasn't a problem for us to go around her at a safe distance. Something was obviously chasing it, cougar? bear? and the situation could have gotten scary if it was a little closer and the river was any narrower.
Whether it be for Cutthroats or whatever you fly fish for get out and enjoy the fall colours, winter is just around the corner.