It’s the end of July, mid-summer, and along the BC coast everything is stirring.  Blackberries are growing in abundance; plump, juicy, and sweet if you pick the ripe ones.  The rivers are clear and the ocean is friendly.  A look to Howe Sound from our balcony at Britannia Beach shows paddle boarders enjoying the protected waters.  Nearby at the spit; where the wind always blows, a host of kite surfers are doing their thing with as much flair as a bird of paradise.  In the hills and mountains surrounding us there are rock climbers and mountain bikers, and along the beaches of nearby lakes and the ocean, there are others still, happy to take a dip on such nice summer days. It is glorious, and peaceful. 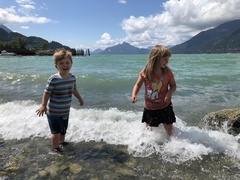 Playing in the ocean around Squamish is a wonderful adventure.

How Sound and the Squamish area is our playground.  It is the childhood of my wife Melanie, and it is a place worthy of exploration.  In odd numbered years, we make time to take part in the abundance that is the pink salmon run.  Pink runs number in the thousands upon thousands, and sometime around early to mid-August they start to show up and they will continue to pile into the rivers through early to mid-September.  We can fish them at shoreline access points along the ocean, like the area around Furry Creek, and later we can chase them in the river proper.  The Squamish River fills to capacity with pink salmon, and when the run is on, it is easy as pie to catch them. 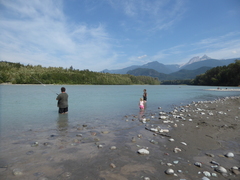 I believe it was 2015 when we took a west coast vacation with our friends Wayne and Leonie, and much to our delight, the pinks were running strong.  Wayne and I decided this was too good of a thing to pass up, so we bought our fishing licences and headed to the Squamish River.  On that day it rarely took more than a single drift to hook up and I am almost embarrassed by the number of salmon we caught.  Dozens a piece would be appropriate.  And all it took was to drift a little orangish pink piece of yarn on a size 4 Gamakatsu octopus hook under a float with just enough weight to take the hook to the bottom.  That was it.  Most of the fish we caught were near shore, in probably a few feet of water. 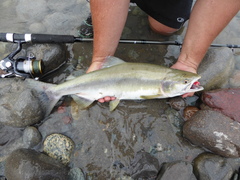 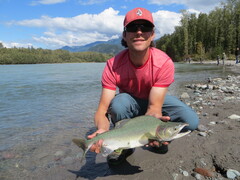 This year, 2021, was also a pink year, but we were just a little on the early side of the run, and that is okay.  There was much to explore, and we were filled to capacity doing fun stuff like exploring the tide pools, beaches, flipping rocks, and looking at sea shells at iconic Porteau Cove.  A place everyone should stop and spend some time.  It’s a kid (and adult) paradise. 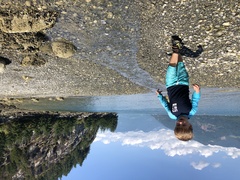 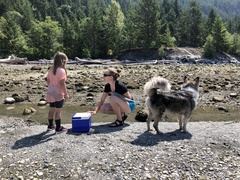 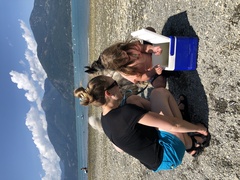 There’s a boat launch at Porteau, and a good friend of mine, Jordan; who moved from Edmonton to Squamish in recent years made me keenly aware of this.  And the sell job he gave me was remarkably easy.   He took the direct approach.  He asked, "Fred, do you want to meet up at Porteau and go fishing tomorrow morning?"  "Yes!" I blurted out, without thought or consideration to anything else that may be going on in my life.  "Great, see you here at 6:00 am."

Getting on the ocean is always special, and I had a hard time sleeping that night, and when sleep came, morning came almost as fast.  Despite the lack of sleep I was up and in great spirits.  After a quick breakfast and packing lunch, I was on the road.  Porteau Cove was quiet in the early morning light.  The world had yet to wake up around it, and it was beautiful.  Jordan arrived at pretty much the same time and in minutes his boat was in the water, our gear was on board, and the quite purr of the motor pushed against the gentle lapping of small waves. 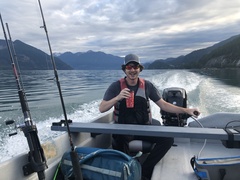 On the ocean and happy as ever.

Our plan was simple, head towards the entrance to Howe Sound and troll for salmon in the early morning light.  Even though it was early in the season, there was still a chance we could get one to bite and for me, that was a chance worth taking.  Regardless of whatever happens with our salmon efforts, as early morning shifts to mid-morning, we would drift known cod and rockfish areas and see what we could catch jigging.  After that we would make the run home and call it a morning. 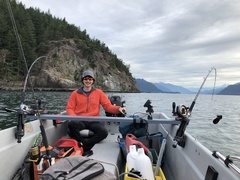 In the calm conditions, Jordan’s boat made easy work of the travel and soon we were passing by Anvil Island and on our ways towards Gambier and Bowen Islands.  In that neck of the woods Jordan eased off the throttle and came to a drifting stop.  We put together our rigger rods and dropped one off of each downrigger.  We kept the trolling depth relatively shallow, typically 70 feet or less and probed potential fishy spots.  This lead to a glorious morning of enjoying our coffee, sharing stories, and breathing the fresh salt air.  It was peaceful, and we are only interrupted once by a rockfish. 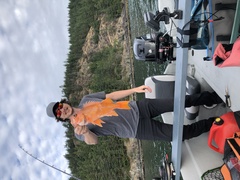 After a couple hours chasing salmon, we figured it was time to switch it up and we pulled in the downriggers and grabbed our jigging rods.  Jordan gave me the pick of jigs to choose from and I selected a 4 ounce glow jig that looked like a squid.  A good choice he told me.  We started jigging in around a hundred feet of water and it took no time before we both were getting bites and in short order all manner of rockfish and flatfish were making their way to the surface. 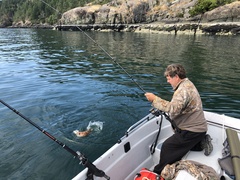 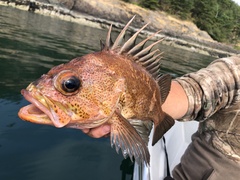 We caught several species, although I would be hard pressed to come up with a definitive ID for most, aside from the quillback rockfish.  The fishing was fun and Jordan picked up a mud shark, adding some size to the mix of fish.  We caught one flounder we could have kept, but we let it go.  The day was more about getting on the water in a beautiful setting with a friend, and it was cool to catch the fish we did.  I also hooked up on something hefty, but half way up it let go.  I suspect it was likely a mud shark, but I would have liked to have seen it first. 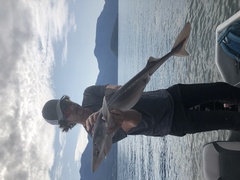 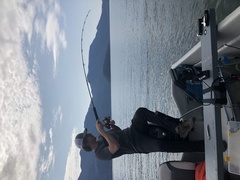 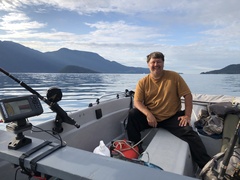 A great place to find yourself.

Time passed easily and soon enough we acknowledged that we had fished the entire morning, plus a little bit more and it was time to head home.  I was happy for this time, and super thankful that Jordan lived in this neck of the woods.  As we made the boat ride back to Porteau Cove, I revelled in how great the Squamish area is, and how wonderful it is that I have had the chance to explore bits and pieces of it over the years.  It truly is an outdoor playground and worth taking the time to get to know.