Though I seldom get to fish for them these days, I’ve long had a love affair with Manitoba’s Red River channel catfish. I caught my first cat some 35 years ago. It turned out that I was severely under gunned, equipment-wise, and before I brought that 30-pound brute to the net, I’d shattered my rod; it was a minor miracle that we landed it at all. I learned through that first experience that you don’t "play" catfish, as you would a trout, walleye or pike. There’s nothing playful at all about wrestling a catfish into submission. It’s more of a schoolyard fight, and as often as not, before you release a catfish back into the murky waters of the Red, you or your tackle will be bruised and beaten for the effort.

I suppose I’ve fished the Red for cats a dozen times or so over the years and look forward to it whenever the opportunity arises. So I was particularly excited when long-time friend Stu Thompson invited me to join him for a day tackling catfish when I visited Manitoba this past August. And while catfishing is always a thrill, I knew this would be even more exciting, as Stu fishes almost exclusively with a fly rod. 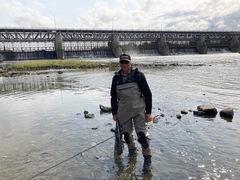 Stu Thompson. There are few fish species in western Canada that Stu hasn’t caught on a flyrod.

Typically, presentations for catfish mean using a pyramid weight on a three-way swivel or a slip sinker fished below a seven-foot medium-heavy rod and reel combo with 14- to 20-pound line. Current speed determines your sinker weight; you use just enough weight to hold your bait stationary. Below your weight you tie a 2/0 or 3/0 hook on a 24" to 36" leader. Over the years I’ve seen a variety of baits used, including nightcrawlers, minnows, cut goldeye, frogs, frozen shrimp and chicken livers. All will work, though shrimp seem to be the most popular these days as it’s relatively inexpensive and easy to get. An alternative to a stationary bait presentation is to drift your bait through the current below a large slip-bobber, much as you would when fishing walleye. It’s more work that fishing stationary bait, requiring repeated casting, but it can be astonishingly effective. 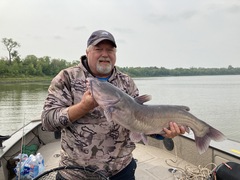 Stu Thompson, meanwhile, has learned to catch catfish, and all the other fish species in the Red from drum to walleye to carp and white bass, on cast flies. I met him at the river on a cloudy late August afternoon, just below the Lockport dam. As he’d recommended, I showed up with an eight-weight rod and matching sink-tip line. I’d imagined we’d be throwing massive streamer flies, much like you would for pike, so was surprised when he handed me a relatively small pink and purple streamer he called a DDH Leech. As I was to learn, this fly is a Stu Thompson original design and at last count has been documented as having caught 96 different fish species across 15 countries. 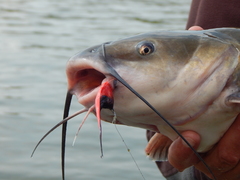 The flies we used were surprisingly small for the Red River’s notoriously voracious channel cats.

We waded in to knee-deep water and Stu advised me to cast upstream, along the edge of a relatively strong current, and then let the fly swing downstream, strip retrieving it at the end of its swing. It couldn’t have been more than my fourth of fifth cast when my fly stopped dead on its swing and I felt the unmistakeable tug of a heavy fish. Catfish on! Unfortunately, after fighting the big cat to a standstill after 15 minutes of ferocious give and take, I lost it shortly before I could guide it to the net; I’m still not sure how it got off and was even more disheartened when Stu said, "Darn, that was a big one, too." When Stu calls it big, you know it’s truly a good fish. 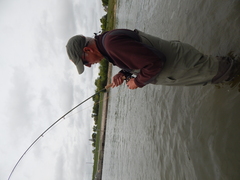 Battling my first cat on the fly. Ultimately, I lost this one.

Still, I’ve never met a more positive guy than Stu, and he just laughed it off as things that happen when you’re fishing. I couldn’t argue and got right back at it. We fished for another hour or more with no results except for a small sauger that Stu landed. Shortly before we were going to call it a day, however, I had that familiar tug and was into my second catfish on a fly. I made no mistake this time, in part, I suspect, as this wasn’t nearly as large a fish as the first one. Despite that, I couldn’t have been prouder holding up my first Red River catfish caught on the cast fly, and it was a great way to close out the day. 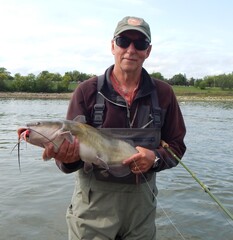 The first catfish I landed on a cast fly.

I went out with another friend, Brian Hagglund, the next day only to find the locks had been opened and water levels were a full three feet higher. The choice spot Stu had shown me was now unreachable. I knew what to look for in terms of current edge, however, and after a couple fishless hours I managed to hook into another cat. It was bigger than the one I’d landed the previous day, but nowhere near the size of the leviathan I’d lost. Still, catching another catfish on a cast fly served to reassure that my first day wasn’t pure fluke; fly-fishing is a legitimate way to tackle the Red’s legendary cats. 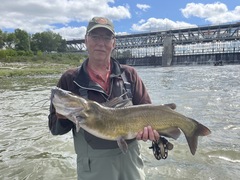 My day two fly-caught channel cat landed on the Red River at Lockport.

Two days later I was back on the Red, further downstream, with friend Brian and renowned Manitoba angler and outdoor communicator, Don Lamont. Don, Brian and I have fished together a handful of times over the years, but it had been a while. We, too, were fishing catfish, albeit using the more traditional stationary bait method. Few anglers can read water as well as Don can and not surprisingly it wasn’t long before he had us into fish. 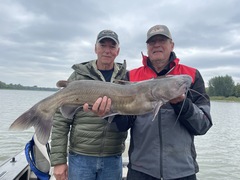 With Don Lamont, reliving past days fishing for catfish on the Red.

Over a couple hours, before a torrential rain set in, we landed a dozen or so catfish. Several would have met Manitoba’s Master Angler standards, but we weren’t about measuring fish. The day was a chance for some old friends to relive some past times and have a few laughs together. What better way to do that than tackling world-class channel cats on Manitoba’s infamous Red River?