Even our most prolific and populous trout streams (and that applies to Northern Boreal grayling creeks too) can be cruel and apparently lifeless places for entry level anglers.
Where many hours of fruitless casting often produce only minimal results.
And the drug of the tug remains a remote and distant experience for fishers not schooled in the complexities and peculiarities of flowing water. Because one of the cold hard facts of angling life is that  all trout in Alberta’s numerous Eastern Slopes trout rivers do not inhabit all of the water all of the time. 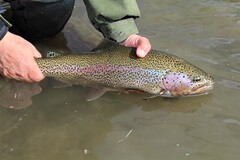 To the contrary, most fish are to be found in a limited part of a river’s structure.
One of the keys to success is the ability to perfect the skill what seasoned anglers call "reading the water".
Which essentially means attempting to analyze the conflicting currents, water depths and obstructions that influence the downhill flow of water and exponentially increase your casting and angling efficiency. Because fishing in fishless water is the best way to not catch fish. Here are five fine places to increase your odds of success and find trout.

These are the classic pieces of trout water that dominate trout angling art where a little river drops in over a rocky rapids and pushes up against a bank or other obstruction which deflects the flow at a right angle or some lessor change in direction.
Thus creating a buffet of potential trout holding water, each of which should be tested before moving on to the next set up.
Obviously fish rising to a hatch of emerging or egg laying aquatic insects like may or stone or caddis flies makes reading the water much easier. Almost a no brainer.

Simply cast a reasonably good imitation of the insect observed on the water in a manner that minimizes current drag a meter or so above the riser and success is almost certain. Of course, it’s usually never that easy. A classic corner pool must be dissected into it constituent parts, because fly-fishing for trout is best approached from bottom to top, first begin with the "tail", where the water shallows in anticipation of leaving the pool and fish come out of the deeper resting water to feed on the passing food sources.
Place a series of searching drifts through the water before moving up to the body of the hole.
Here several current breaks will present the next challenge. Along the far bank, the intersection between the faster water and the back-eddy that usually forms on the inner part of the curve and the soft water next to the main surge. 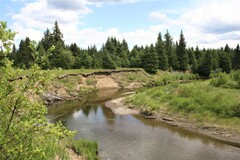 One of the places that’s not necessarily productive - to the likely confusion of beginning anglers - is the pool’s deep,dark center where the fish are generally inactive and getting your fly down to the holding zone problematic.
The third likely spot is the pool head, just below the rushing rapids where trout tend to cue up anticipating aquatic food sources to come tumbling down the flow.

Casting a floating fly over feeding trout in flowing water is seen as the gold standard for most trout anglers, but sometimes you have to go down in the water column to achieve success.
Either dead-drifting a nymph under a strike indicator or fishing a swung wet fly or streamer "down and around" are the most effective ways to increase your hook-up rate.

A compromise where two-fly set-ups are legal is a fusion called a "hopper-dropper" rig.
Where a weighted nymph is suspended from the bend (or eye) of a bushy, buoyant fly like a Foam Hopper or Stimulator on a short length of tippet material. The floater multi-tasks as both a strike indicator and a lure. When the hopper bobbles, pauses or dips, set the hook.

The second piece of potential productive water is the transition zones between a pool and a rapid known as "runs, riffles and glides."
A streamy section of the river usually over a cobble bottom which helps break the flow enough to allow the trout a little relief from the current. Fish inhabit these places at dinner time where the moving river brings the food to them and the water is cooled and well oxygenated.
The choppy and swiftly-running water also gives the angler a clear advantage over wary trout by masking less-than-perfect casts and limiting the time the fly is over target. 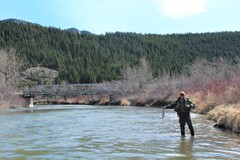 Forcing the fish to make quick and compulsive decisions to either feed or pass. All three techniques described about are effective in runs, riffles and glides. But sometime finding the holding water in a maelstrom of moving current can be the biggest challenge.
RRGs can be hard to spot. Look for understated variations in current flow. A flat slick among the chop, a deeper shade of water colour or a subtle change in depth all indicate potential trout holding water.

Trout and grayling, especially those populations that inhabit diminutive water, are in a constant fight for survival, and seek out safe places from predators of all types. Water depth is the most obvious refuge, but overhead cover is also a preferred hiding place.
Whether it be overhanging vegetation like river-bank willows and alders, leaning trees, undercut banks or instream sweepers and log jams.
Vegetation that touches the water has another attraction for trout because the wood channels the flowing waters and creates feeding lanes by concentrating the food sources.

Brown trout and Alberta’s unique Athabasca rainbows (the only rainbow trout native to the eastern side of the Continental Divide) are particularly fond of hanging out in places with a roof over their heads. 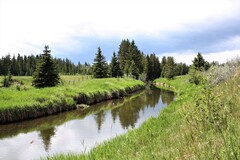 Fishing the shelter comes into its own on central Alberta’s spring creeks where most of the fish are found pushed up against the banks - either in the pockets created by trailing vegetation or the streamy water along an undercut. Depending on your casting skills getting a fly right under the bank can also produce explosive results.

Mid-summer grasshopper fishing - where the bugs are blown into the river by strong prairie winds is also a great way of exploiting shelter.
These classic "hopper banks" of lush grasses that sweep down to the river surface can produce magic angling opportunities.
Big timber in the river is another obvious source of trout shelter. All the same trailing vegetation situations apply.
Run your fly down the bubble line that usually forms next to the semi-sunken trees.
The current break below the sweeper will also hold fish. And don’t overlook the water beside the log jam where the fish come out from the cover to feed but still have the reassurances that protection is only a flick of the tail away. 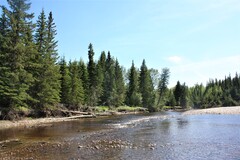 One of the great paradoxes of big-water angling on the world famous Blue Ribbon section of the Bow River below Calgary is that most of the fishing takes place within a few metres of the bank. While the heavy mid-river water is generally ignored.
Water that veteran Bow River fishing guide Barry White calls "buckets and hidey-holes."
While Bow River drift-boat angling is a whole different school of fishing, angling these current interfaces wherever they occur is another way of discovering trout concentrations and increasing your strike rate.

These seams, current breaks and pockets are present on most of the water described above. But specifically focusing on the areas where two types of water intersect is a proven way of ramping up angler success.
Because trout and grayling love to take advantage of the diminished flow rate while at the same time exploiting the concentration of food sources being propelled down the faster water.

A "seam" is the identifiable line in the water where the slower and faster flows intersect - often exaggerated by a parade of bubbles.
Current breaks like this can be created by instream deflections such as gravel bars, back eddies or abrupt changes in water depth.
Pockets and buckets are sections of soft water - either above and below instream obstructions like boulders or stumps - where fish also find relief from the flow. Fish the slower water below the obstruction but also work the two seams on either side of the pocket.

An often overlooked but potentially productive part of a trout river is the part of a pool where the river begins to pick up speed and prepares to go rushing down the next rapids.
These "tail-outs" are particularly attractive to mountain cutthroat trout that come out of the holding water when the sun begins to warm the water later in the afternoon. Either look for rise forms or systematically search the water with a dry fly or nymph in a series of cast beginning with nearby drifts. Then lengthening the line so the entire width of the run is covered. 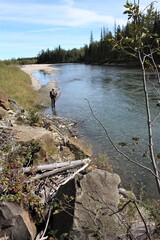 Theoretically fish can be found pretty well anywhere that’s wet, but your angling success can go up exponentially if you focus on these five fine places to find trout. Attain that sometimes mercurial and mystical skill of "reading" the water.