Springtime in Alberta - Can Thrill You to the Bone

Just when you think it’s over, it ain’t over.
And as they say about Alberta weather, if you don’t like it wait 5 minutes - because it’s likely to get worse.
In springtime the pernicious prairie/mountain/boreal climate becomes even more contentious. And like Alberta’s iconic country star Ian Tyson sings in his classic Just Like Springtime in Alberta about "warm sunny days and endless skies of blue." "Then without warning, another winter storm comes raging through." When you are Wildrose Country angler - after being cooped up in an ice-fishing tent or dredging nymphs for reluctant trout in icy Chinook country rivers - the recalcitrant weather can be even more problematic. 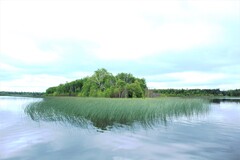 It’s a short sweet season and we can’t wait for it to finally get started.
But the remains of winter still chills the stillwaters, run-off and snowmelt swells the Eastern Slopes rivers and bug life can be sparse and sporadic. If it’s spring time, it seems nobody has told the fish. With the possible exception of Alberta pike. Because when it comes to post-spawn pike springtime in Alberta can "thrill" you to the bone.

It was one of those warm sunny days and the blue skies seemed endless when my fishing partner Emmerson and I cruised across a popular Edmonton-area lake putting the cottage clutter behind us for the wild sanctuary of the south shore. Here three bull-rush bays stretched out before us and red-winged blackbirds battled among the pencil reeds for the prime nesting sites. Beyond the standing vegetation when the Lowrance sonar showed two-or-so metres of water, Emmerson cut the Yamaha and set the anchor. A fresh green blush of bursting aspen buds washed over the lakeside woods and the sounds, scents and serenity of spring immediately overwhelmed us.

Already a fine day on the water even if we didn’t find fish. I tugged my 8-weight flyrod from the rod rack, pulled a good pile of intermediate-sink line off the reel and launched a chartreuse and white Lefty’s Deceiver toward the shoreline foliage.  Let the fly to settle then began bring it back in an erratic strip-strip-pause retrieve - simulating a stressed bait fish. I was hardly into my second set of strips before the lure stopped in a violent bump. I raised the rod, set the hook and the fight was on. It wasn’t the biggest pike that reluctantly slipped into the net. But the cool lake water clearly had the little predator punching well above its weight. 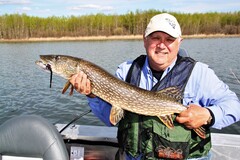 This post-spawn beauty fell to a black and purple streamer.

So it continued for the rest of the afternoon and by the time we weighed anchor and headed for the launch we had boated and released something in excess of 50 fish - with a few in the trophy zone - topping the metre-or-more mark. In Alberta the post-spawn is mostly dictated by government regulation when many years ago after a disturbing crash in fish populations Alberta Environment and Parks fisheries managers wisely implemented a six-week angling closure during the crucial spring spawning season for the province’s warm-water stillwater species.

The angling-free window changes depending on the prairie/parkland and northern boreal zone so be sure to check the regs. But wherever in the province the pike water is located, by the time the closure comes off the toothy critters are hungry, eager and waiting after the rigors on the spawning beds. Because once the perpetuation of the species has been secured it time to pack on the groceries.
Here how to make the most of your post spawn-pike fishing success.

Post-spawn pike angling is clearly a late spring early/summer fishery.
After the lakes warm up, the apex predators become far less voracious and seek cooler conditions lower down in the water column. Making them more difficult to locate and even harder to tempt by mid-summer. But post-spawn pike thrive in what would be considered skinny water under July/August conditions. Where the water has been warmed by the power of the sun’s increasing radiance. Contrary to popular belief, warm sunny afternoons where wind is only a rumour are ideal pike days. The mellow water encourages bug action which drawns in the sticklebacks and shiners. The predators are quick to follow. So buckle up. 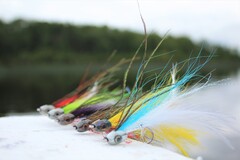 Unlike walleye, where submerged rock piles, drop-offs and other lake-bed variations called "structure" can be the key to success, so-called "pike water" is a different kettle of fish, so to speak. Key on shallows and weedy bays. Anchor beyond the cordon of reeds and cattails in two to four metres of water. But be conscious of the submerged vegetation. Nothing ruins a fine day of pike angling than spending unproductive hours removing pond weed from your flies and lures.

Post-spawn Alberta pike fishing comes into its own on waters where the water wolf is the lone apex predator. Whenever pike have to share the bait fish bounty with walleye, both their size and numbers quickly diminish. This is particular prevalent in waters where massive numbers of walleye fry have been stocked in recent years to hopefully revive collapsed populations. With the introduction of several million potential competitors, it takes many years to restore the natural balance.

While classic pike angling - with a standard spincaster rod, crankbaits and spoons of which the Len Thompson series is the gold standard - is an effective way to succeed at post-spawn pike angling my weapon of choice is a fly rod. I’m clearly not alone. Numerous high-end fly-in northern lodges market shallow water, early season pike angling. Because while a few walleye will suffice for the lodge’s traditional shore lunch, it’s the super-sized pike fishing on a long rod that turns a routine experience into the trip-of-a-lifetime adventure.  But not any fly rod. A 5-weight fly rod may suffice in playing and netting most pike encountered on Alberta’s accessible pike lakes - where the standard harvest limit tends to keep most fish under the 63 cm. minimum.

The problem comes with attempting to cast the large, heavy flies associated with pike angling. An 8-weight loaded with an intermediate sink-rate line has the necessary backbone to turn-over these bulky, air-resistance flies and pump out the long casts associated with stillwater streamer fishing. Although pike can sometimes be tempted to take surface flies with a floating line and Dahlberg Diver-style flies or frog-simulating poppers, the most effective strike zone is within a few centimetres of the bottom. A fly with some weight either attached or built in is a way to get the lure down to the pay zone quicker. If you are tying your own weight components called fish skulls are a favorite of mine. Not only do they come with attachable eyes which predator pike key on, the weight imparts a seductive jigging motion to the streamer.

My go-to colours are from the palate of the above-mentioned Lacombe, Alberta lure-making legend Len Thompson - chartreuse and white, red and white, green and brown and of course red and yellow - the iconic Five o’ Diamonds colours. Also purple and black - believed to be a baby burbot imitation - has also proven to effective for early season pike. Whatever the fly colour selection, one essential piece of terminal tackle is a short length of shock tippet.

Most leading leader manufacturers offer a version of toothy critter braided-wire leader that can be easily tied to a tapered leader with a standard surgeon’s knot. A pair of needle-nosed pliers with a wire cutter is also an indispensable accessory for changing flies and removing hooks from a pike’s jaw - while avoiding its rows of razor-sharp teeth. Pinching the barbs on your streamer flies allows for rapid released and minimum damage to the fish. 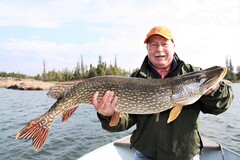 The way to succeed at post-spawn pike angling is to set up in promising pike water, And begin casting in a 360 degree pattern around the boat using strip-and-pause retrieve to induce strikes after the fly has settled into the strike zone. If the strikes don’t come varying the speed of the retrieve may activate the fish. Dangling and teasing the fly for a moment by the boat at the end of a retrieve is an effective technique to induce a strike from a reluctant follower. Having a big fish blow up almost in your face can be downright nerve-wracking. But a lot of fun. 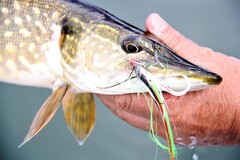 After a while and no strikes are forthcoming, then move on. Also be aware of rising pike and the phenomenon seasoned anglers call "nervous water", indicating subsurface predator is disturbing a baitfish school known as a "bait ball", as another sign that fish are present. Casting from a slowly moving float tube or pontoon boat is also a proven way of angling for post-spawn pike with a fly rod. The strikes are savage and the fights a no-holds-barred wrestling match. Like Ol’ Ian says, "Springtime in Alberta, thrills me to the bone."

(3) In the Good Old Summertime

(5) Springtime in Alberta - Can Thrill You to the Bone

(16) Tips That Will Make You a More Successful Fly-Fisherman

(22) Snowbirding with a Fishing Rod

(24) A day on our foothill streams

(36) Fall brings the big walleye out

(39) Make Your Own Fishing Adventure

(42) Fly Fishing in the Desert

(47) What to expect when fishing the West Coast

(55) The Bull Trout of the Athabasca

(59) The Pink Salmon of the Squamish River

(61) Fly fishing beyond Trout: getting started

(73) Fly-Fishing Pike Through The Seasons

(83) Do It Yourself Pink Salmon

(92) Sealing the Deal – How to Ensure You Land More Fish

(97) Reindeer Lake - A Diversity of Opportunity

(102) The Fly Fishing Season Ahead

(103) IN SEARCH OF SPECKLED FOOTBALLS

(105) Bright Fish from the Land of Silver

(109) Versatility the Key to Success

(114) Chasing Winter Whites One Lake At A Time

(116) The Twelve Gifts Of Christmas

(127) GEARING UP FOR SMALL STREAM TROUT

(139) Cure the Winter Blues with a Good Book

(140) Hot Strategies for the Cold Months

(146) Where the Trout Are The art of locating feeding trout in rivers and streams.

(150) The Bountiful Bones of Ascension Bay

(151) Grayling in the Eye of the Beholder

(156) The Most Important Hatch of the Year

(160) The Secret to Landing the Big One Finally Revealed

(164) Tips and Tricks to Save the Summer Slow Down

(187) Fishing Among Giants-Pursuing Lake Sturgeon on the Prairies

(190) Bead Head Flies, Plugs and Shot and other Spring Favorites for Pothole Trout

(193) Maximize the Odds - Use Multiple Presentations

(198) A Look Ahead to Great Trout Fishing

(199) Wrestling White Sturgeon on the Fraser

(202) Embrace the Spirit of Adventure

(210) Hitting it Right with Water Boatman

(215) First Fish of the Year Pothole Rainbows and Browns

(217) Sometimes There is More to Fishing Than Catching Fish