In the Good Old Summertime

It’s been said many times that any day on the river is better than a day in the office.
And the good times ramp up to a frenzy during that fleeting time in late May and early June when the mountain runoff has largely subsided, water temperatures remain within the trout and grayling’s comfort zone and the large and prolific mayfly and stonefly hatches turn Alberta streams into a bug buffet. With the predictable stimulating effect on hungry trout.

It’s often referred to as "Fly fisher’s Christmas" or what the Brits call "Duffer’s Fortnight."
You’d be crazy not to be on the creek, but sometimes work/life balance gets in the way and through no fault of your own your angling experience is pushed back to the "Good Old Summertime."
Yup, those "days of pleasure we now fondly treasure" as the old song goes.
"With the birds and the trees-es and sweet-scented breezes."Then reality hits.

By mid-summer water temperatures have risen, the high, hot sun has turned off the fish, rivers that once held boisterous flows are now gentle trickles and lakes and trout potholes are pea-soup green with algae blooms.
Not a pretty picture. Especially if you are planning a week in the West Country with a flyrod in hand.
But it’s not necessarily all doom, gloom and next year country.
Here are some helpful ways of turning those Dog Days Blues into "days full of pleasure."
That you will "fondly treasure." 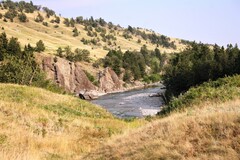 The Oldman River running low and slow in early August.

The natural reaction to slow, summer, river angling conditions is to go deep or go home. Under the belief that the trout and grayling have retreated to the cooler depths of big pools. Wrong.
In many cases actively feeding fish seek out shallower, streamy water where the flow tumbling over rocks pumps oxygen into the stream and the turbulence causes evaporation which drops the water temperature.
Several species of summer-hatching insects also prefer runs and riffles to deeper static water.
Pool-heads and tail-outs are places to target as well as classic riffle structure.
Also be aware of mid-stream micro-habitat like slacks behind boulders or scours where the water deepens and offers protection from the current. Streamy water also helps disguise tippets and forces trout to make hasty decisions to take or pass. 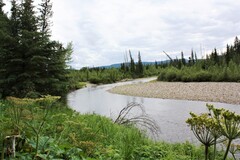 Cutthroat trout are active in midsummer.

Up Early and Stay Late

A hot, high sun in a clear blue sky sounds like the ideal time to be out on the water.
Ideal for sun-tanning, maybe. But not necessarily if you want to catch a lot of fish.
In reality those mid-summer conditions can be the hardest to find active fish in.
Better to concentrate on the shoulders of the day.
Early morning and, particularly, the evening rise - when the sun slides behind the Lodgepole Pines and Aspen Poplars, the bats and nighthawks begin buzzing overhead and summer insects like pale morning duns and caddis flies begin hatching and egg-laying.

There’s nothing more haunting and exhilarating than to hear a big brown trout feeding somewhere out there in the gloom. And you are trying to deliver a fly that you can no longer see to a seam in the stream where the big boy is lurking. The same scenario applies to the numerous pothole stocked-trout lakes that fish and wildlife departments in the three Prairie Provinces have developed over the years.
The night time is also the right time on many of these waters.
On the prairie trout waterbodies where progressive limited-harvest "trophy" regulations have been implemented, the evening rise can be spectacular with 50 cm-plus fish coming to the net.
Ironically the opposite applies to Alberta mountain-sourced cutthroat trout streams.
These rivers cool down noticeably at night and it requires the mid-summer heat to warm the pools and bring the water temperature back up to the active range.

There’s a new twist to this story with the recent introduction of "time of day" angling regulations by the Alberta Environment and Parks Department.
Where fisheries managers now have the powers to temporarily ban angling on all southwest Alberta trout streams if temperatures and stream flows reach critical limits on the Bow River below Calgary.
Montana has already had these so-called "Hoot Owl" regulations for several years.
Anglers will have to vacate the water from 2 pm to midnight for a two-week period if adverse conditions prevail.
Which takes Up Early angling to a whole new level.

I’ve spent more hours than enough waiting beside a low-country brown trout creek devoid of insects, staring skyward, praying for some cloud cover and hoping for something to happen.
Conversely I’ve had superb summertime angling under similar conditions - where trout come eagerly to super hatches of green drake mayflies and golden stoneflies as the sun bore down and the air temperature was in the mid-20s C. The only difference was a few hundred metres of elevation.
Because spring comes later the higher you go into the Rockies.
Jasper National Park’s famous upper Maligne River doesn’t even open until July 30.
And the big Flyfisher’s Christmas fly hatches of the flatland rivers - where super-sized trout abandon their wariness and feed openly and aggressively - are pushed back well into mid-summer doldrums.
So get high or go home. 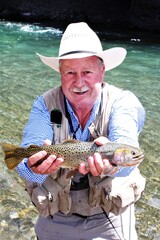 Change as Good as a Rest

Seasoned anglers will quickly learn that all fish species are not active all of the time.
There are many factors that motivate fish at different times and seasons of the year.
Anyone who has experienced the drama and excitement of post-spawn, shallow-water pike action with testify to that.

Then a month or so later you can’t tough a ‘gator on the same waterbody.
Like country star Corb Lund says "it’s time to switch to whisky, we’ve been drinking beer all night."
I’ve already written about mountain cutthroat coming alive in mid-summer.
Alberta walleye also remain active during the doldrum months. Target the deeper side of underwater structure like drop-off and rock piles and keep your lures and baits tight to the bottom.
And there’s another prolific fish species " mountain whitefish " that are extremely active when others have switched off.

This mid-summer madness is triggered by the Rockies’ annual spawning run up most Eastern Slopes rivers.
These large concentrations of fish feed enthusiastically on traditional nymphs like Pheasant Tails and Hare’s Ears under strike indicators or soft hackle wet flies swung behind medium sink fly lines.
Other overlooked fish species are goldeye and mooneye which are present in the lower, warm water reaches of most prairie rivers.

Higher water temperatures don’t appear to bother them.
And when the rivers "gin" down from the spring freshet these "prairie tarpon" species surface feed actively on dry flies. 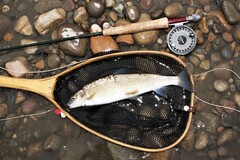 Mountain whitefish angling picks up as the temperatures soar.

A rule of thumb for mid-summer angling is the smaller the better. May and June is the time for big fly angling.
Where waterborne insects like green and brown drake mayflies or stoneflies like swalas, golden stones and salmon flies drifting lazily down the currents or buzzing tantalizingly across the pool surface drive trout crazy.
Sadly the summertime aquatics are far less showy.

Diminutive mayflies like PMD’s, sulphurs, blue-winged olives and microscopic tricos dominate the trout’s diet.
The same goes for the prolific flights of summertime evening caddis and yellow sally stoneflies.
Come to the river armed with flies from Size 16 down to Size 20.
A headlamp and a pair of magnifier glasses are also a wise addition to a mid-summer angling outfit where low light conditions and downsized flies add to the challenge of changing flies.
The same applies to terminal tackle where the hypothesis of "fine and far out" means long leaders and tippets pared down to 6X may be required to fool the fish.

Mid-summer trout food sources are not confined to insect species like may, stone and caddis flies.
For a number of reasons ants (both winged and crawling), black beetles, grasshoppers and even honey bees find their way into our trout and grayling rivers.
Summer hopper angling can be spectacular - especially on windy days.
Key on areas of the river called "hopper banks" where course gasses reach down to the river surface.
Work up the bank placing a floating hopper imitation along the seam near the trailing grass with a noticeable splat and bounce the occasional cast off the grass to imitate an unlucky hopper being dislodged from the foliage.
Then buckle your seat belt. The rises when they come are spectacular and violent. 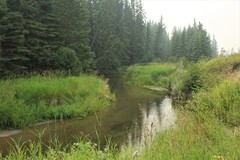 Even in the Good Old Summertime angling can be rewarding and satisfying.
So long as you’re willing to adapt.