Caddisflies are one of the most abundant and important insects in many North American lakes and streams but up until the early 80's they were largely ignored compared to the more glamorous mayflies. One of the first fly fishing books I read was Gary LaFontaine's "Caddisflies". Published in 1981 it was my, and many other fly fishers, introduction to this abundant and important insect. With approximately 14,500 species of Caddis, order Trichoptera, they are found in almost all areas of North America where fly fishing occurs, and it is one of the only insects that has multiple species that hatch all season long. Due to this the fish are used to seeing and eating caddisflies all spring, summer and fall.

In Alberta hatches of Caddisflies usually start in mid to late May and last until the end of August. In mid August the Caddis known as the October caddis, one of the largest caddis, appears and lasts until the end of September. The name October caddis comes from its' color, orange, and not the time of its emergence, Fall Caddis is a more appropriate name.  Caddis are a very valuable food source for trout and other fishes.

They can be found in all water types, rivers, streams, ponds and lakes and are eaten by trout, bass, pan fish, walleye etc.  A healthy caddis population is a sign of a healthy water ecosystem although they are one of the most tolerant of less than ideal water conditions. Due to their abundance fish are used to seeing Caddis throughout the year and therefore are a great searching pattern when nothing seems to be happening on the water body you're fishing. 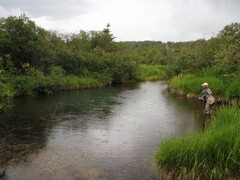 Caddis can be found in all water types.

The life cycle of the caddis has 4 stages, egg, larvae, pupa and adult. As adults they look similar to and are related to moths. The larvae consist of three different groups, free living, net builders and case builders. The free living larvae are predators and seek out food by crawling around on the bottom. Net builders build a spider web or net that filters and gathers food. Cased caddis build themselves a house from sticks and stones and other debris, these houses are quite astonishing. They use these houses as camouflage and protection from predators. These worm like larvae are usually Green, olive and cream and will molt several times before reaching maturity. The pupae stage, which is Mayflies and Stoneflies don't have, occurs next.

The pupae rises to the surface using both its legs and an air bubble that it has created in its cocoon. This cocoon keeps the adult dry and helps propel it to the surface. Once at the surface the adult flies away quite quickly as it doesn't have to wait for its wings to dry. Once free from their case the adults will fly to bank side cover where it completes drying its wings and mates.

Mating swarms of Caddis can be something to behold, often looking like billowing smoke as they pulsate up and down by the thousand, usually at dusk or at night. As adults caddisflies can be easily recognized as they hold their wings over there back in a V, or tent like shape and a lot of species have very prominent antenna. Unlike mayflies, which are short lived, caddis can feed and take in water and live for days if weeks as a terrestrial insect. Once the female caddis is ready to oviposit her eggs she skitter along the surface or will dive or crawl into the water and swim down and deposit them. She will then end up on the water surface, sprawled out and spent. 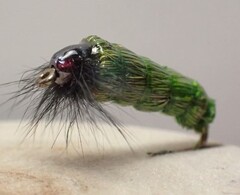 Some species build cases from debris.

Fly patterns for caddsiflies are far less complicated than Mayflies, the Elk Hair Caddis is a standard in the west sizes 12 - 18 in various body colors, mostly brown, black and tan are all that are really needed. The deer hair or elk hair wing imitates the tent shaped wing of the adult caddis at rest and helps float the fly. The Goddard Caddis is another good choice, made of trimmed deer hair they float like a cork due to the hollow deer hair. The nymphs don't need to be anything special either they are usually tied on curved to imitate posture of the drifting nymphs.

Where the attention needs to be paid to the pupa form of the insect. Gary LaFontaine first imitated the pupae using trilobal yarn to create a case that trapped air and looked like the gas filled cocoon of the natural.  Many wet flies are/were tied to look like caddis with their legs tied along the side of their bodies but these don't imitate the naturals very well due to the lack of shine the air bubble on the natural produces. 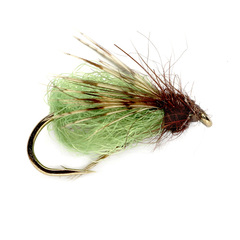 Caddis are known to avoid bright sunny days, on these days shake the willows long the stream bank and you'll likely scare up some caddis. On cloudy days or at dusk is when you will see most caddisfly activity. Techniques for fishing caddis differ from Mayflies in the emerging pupa stage and the dry fly stage. The larva can be imitated with any number of nymphs and can be fished using the usual dead drift nymph techniques. The larvae will often get washed away in the current when out hunting for food and are very vulnerable to fish at this state. Also when they are ready to emerge they will often drift long distances before starting their ascent. When the Pupae ascend to the surface they must break through the surface film before they fly away, it is at this stage that they are very vulnerable to the trout.

Trout will set up in a feeding lane and eat the pupae just below the surface. Many anglers mistake this as surface feeding and will be frustrated fishing a dry when an emerger pattern just below the surface is the ticket. When an emergence is taking place you should be fishing from the stream bottom to the top. A dead drifted pupae pattern followed by a tight line swing will often draw fierce strikes. The Leisenring lift, lifting your fly or flies upwards, is a good technique for this as it mimics the natural’s ascent to the surface. Casting ahead of a visibly rising fish and swinging up in front of him takes some practice but is often deadly. When the females are laying their eggs they bounce on the water and drag their butts to release their eggs from the egg sac. Skittering your fly along the surface, with pauses imitates this quite well. It also allows you to not have to delicately land your fly on the water, land it with a splat like you would a grasshopper or stonefly pattern. 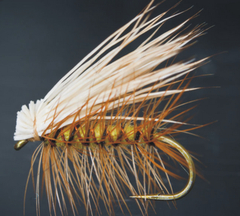 The Elk Hair Caddis is an effective dry fly pattern for matching the adult.

Caddis dry fly patterns also make good dry patterns in a dry-dropper set-up, try hanging an emerging nymph pattern under the dry. Also they work well as the second fly in a double dry set-up. Due to their season long abundance caddis patterns make an excellent pattern to use on a double dry rig. Using a larger dry caddis pattern can help you track a smaller dry, such as a midge, on the same rig. 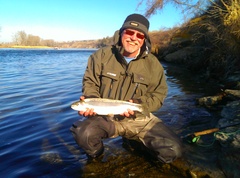 You can also use it an indicator for the Caddis pupa emerger pattern that can be tough to track slightly under the surface. For beginners a dry caddis such as the Elk Hair Caddis or the Goddard Caddis are great flies to learn with, they are very visible so a beginner can see exactly where their fly is landing and how it is drifting. There's also a good chance at catching a fish and that's what it's all about.