It finally happened. I was fishing for pike and having a great time. I was using my favorite lure that I affectionately call ‘pike candy’, which between you and me is a #9 shallow running Rapala Perch Shad Rap. That one plug has caught me thousands, literally thousands of pike up to 22 – 23 pounds. I don’t catch a lot of the larger ones, but I do catch piles of the three to 10 pound fish. They are everywhere, especially come fall. 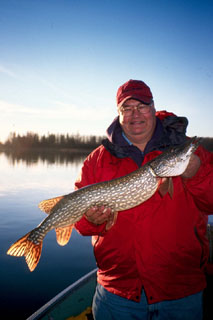 This fall day I was having one of my usual fun days out pike fishing. I had caught pike all day long and I’d taken to catching them using my trout rod and eight-pound Fireline. It’s become my favorite set up. I’d attach ‘pike candy’ to the end of a fancy 18 inch titanium leader and the pike responded by eating my offering time and again. Life was good.

I hooked another pike and a few seconds into the fight the rod snapped down so hard it was nearly ripped from my hands. The drag wailed as line screamed out. It was unstoppable. It felt like a grizzly bear was out there mauling my fish. For several minutes I couldn’t do anything and as quick as it started, it was over. I could feel the struggle of a fish on the other end and, it was completely different, lighter. I reeled in the pike thinking that I had a two or three pound pike that just got hit by another larger fish. What came in surprised me. 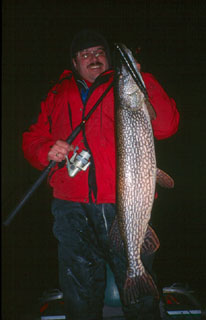 This was no little fish. This northern pike was in excess of thirty inches long. It was at least seven pounds, likely more. I picked the fish up and looked it over. This is an awfully big fish to be considered bait, but quickly a trickle of blood started from the back. A closer inspection reveal bite marks around eight inches across! The big fish were still here; I just wasn’t using big enough bait to get them interested.

Thinking back, the facts supported my notion. Many of the pike I had caught had the tail of a lake whitefish sticking out of their throats. These lake whites averaged 14 to 16 inches. Why would a big pike spend time chasing my little hook? Probably the biggest of pike didn’t bother. Sure I caught the odd one, but I remembered a time, probably four to six years ago when I was totally focused on catching the biggest of the big pike. I used extra heavy rods and the largest lures in the tackle stores. My favorite hooks were the big Suicks and the biggest Rapala Magnums. They never caught me a lot of fish, but a good portion of the bites were big. Having seen what happed to the big pike I caught that day, I think it’s a good time to bring them back out. 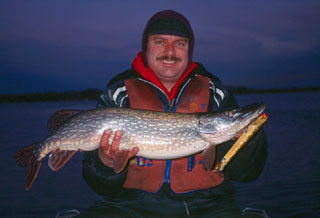