It's a given, fish that receive more pressure, over time get more and more difficult to catch. Just consider how demanding those trout on the famed Crowsnest and Bow Rivers have become. Some time ago a floating fly that resembled the bug on the water was enough to prompt a strike, even if the size and color were a slight miss. Now the size has to be on and the color needs to be close. Beyond that the cast has to be good and the line can't be too thick to spook wary trout. Fish are getting conditioned to pressure and making continuous adjustments to avoid being fooled by another hook. 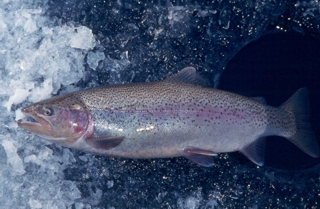 Fish react and respond to the pressure so we as anglers need to make adjustments in our own approach to continue to catch them. Here are a few of my favorite fish busters when it comes to a tougher bite.

The first consideration is line. The thicker the line, the easier it is for a fish to see and the more often a fish will reject whatever is tied to it. When it comes to trout and whitefish this trick that has served me well: I use six pound main line, but on the end I'll tie two or three feet of 5X tippet material, which is substantially thinner. I'm positive the thinner line has resulted in more bites and my unscientific research supports this, because whenever I'm out with someone that uses thicker line, they usually catch less. The same can be said when fishing for pike. Instead of using a thick shiny steel leader, I've switched to using those black, no kink super thin titanium leaders and I am convinced that I'm catching more pike because of it. 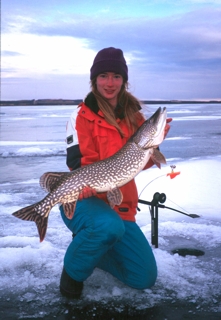 My third consideration is outside disturbances. I try to keep outside influences to a minimum. Especially when I'm fishing shallower water. This is doubly important when it comes to ice fishing. My buddy Aaron and I were fishing East Pit Lake for rainbows and we found the only way to consistently get the better fish to bite was to put down a trout worm on a set line and walk off the ice and watch our lines. It was funny, but any time we were on the ice we didn't catch fish, but after we left the ice, we got bites. If that's what it takes to get the fish to bite, that's what I give them. 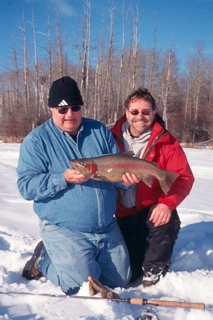 These are a few considerations out of many that can help turn the tide on pressured fish. By keeping disturbances down and presentations small and natural, it's a guarantee that more fish will be showing up on the ends of our lines. 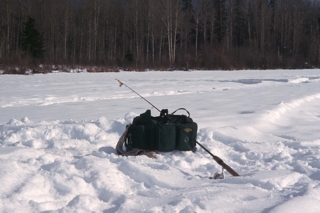