It's fall and like I mentioned in the feature this month, big pike have moved into the shallows to bust up the local whitefish populations. Fall also means that this is one of the very best times of years to catch a monster. Versatility, I discovered, is the key to unlocking these big pike with each day being different. Over the years the following approach has worked very well for me and here are my lures of choice. 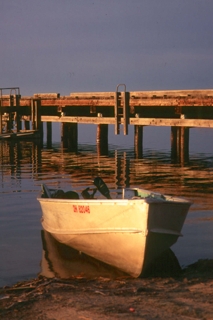 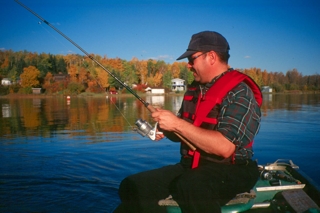 The first lure I normally try is a suick. My first choice is the seven-inch model, but occasionally I'll chuck the nine incher. The suick is a floating jerk bait that dives when you jerk the line. The depth it dives is totally controlled by the little metal tail on the back of the lure. The more that tail is bent down, the deeper it dives. By making these adjustments I can jerk the lure along in several inches of water or drive it down to five feet. Because it's a jerkbait, it can cover water fast and quickly let me know if the fish are actively chasing. 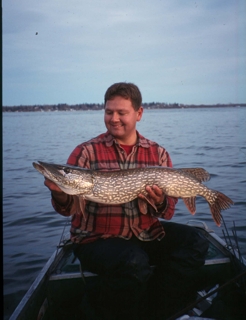 If it turns out the pike are not chasing, then it's time to slow things down a bit. I move down to a # 9 floating shad rap in perch color. I run the shallow diver model, which has become known as 'pike candy' to my friends and I. If the pike are moving at all, this lure gets hit. It's just that simple. 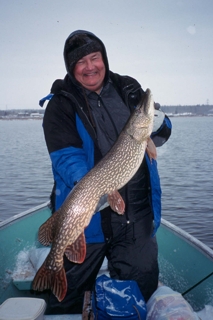 If that fails, then it's time to go down and get nasty. It's time to pull out the suspending Rapala Husky Jerk in Firetiger color. I chuck it out as far as I can and crank them fast for the first 10 feet. This will drive the lure down and then I do a stop & go retrieve with extremely long pauses. Sometimes I'll let the lure sit for as much as 10 seconds and if that doesn't sound like a long time to you, just try it. It's an eternity when it comes to fishing time. This 'do nothing' retrieve, however, is deadly and many pike snap it up on the pause. The hit will feel like a really light, but sharp tap. That said, if anything feels even remotely different, I set the hook. Many times intuition and the ensuing hookset have turned a phantom feeling into a fish.

Those are my standard three presentations to catch big fall pike and they all work. They cover the entire gamut of fishing situations. The Suicks are the big aggressive lures for big aggressive pike. The Husky Jerks offer the dead slow stealthy approach for inactive pike and the Shad Rap runs right up the middle. It's small and appealing enough to tempt pike in most situations. Somewhere, between those three presentations you should find the one that will connect you to those big fall pike.