River Fishing is Heating Up

While attending the U of A last winter I met Colleen, a wonderful person, an ecologist and mom who wanted to introduce her children to fishing. We made plans to go out fishing and sometime towards he middle of August our schedules agreed. We met along the shores of the North Saskatchewan River and had a great evening.

Colleen’s children Kieran and Erica were keen to catch their first fish and the day started with promise. A number of goldeye were rising on the current line a short cast away. We set up a small jig, tipped it with a worm and put on a bobber. Since goldeye like to feed on or near the surface we suspended the jig only a foot or so down. I think it was on Kieran’s second cast he made solid contact with his first goldeye and reeled it in to much splashing and commotion. Erica then hooked up and reeled a goldeye all the way to shore where it made a final jump and shook the hook. 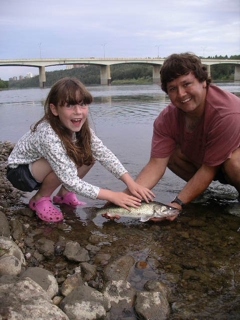 As the evening progressed we switched over to lures and then finally to fishing worms on the bottom. In addition to the goldeye, we picked up a chunky walleye and a fat sucker. It was a great evening, punctuated by guest appearances from a large beaver and the resident woodchuck. With August rolling into September, fishing on all rivers should start to get fast and furious. 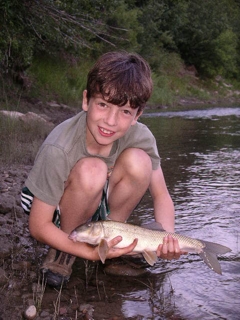 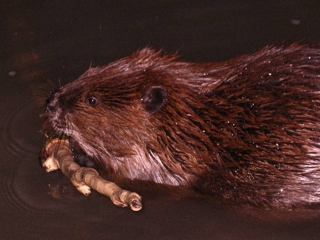 The North Saskatchewan River right inside of city limits will fill to capacity with large walleye. Randy from the West End Fishin’ Hole picked up a beast of a walleye that measured out at 28 inches, as well as, several other large ones. Casting larger crankbaits like husky jerks as the evening settles in should get results. 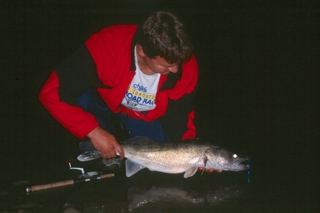 Closer to the mountains, runs of rocky mountain whitefish, grayling and bull trout will come front and center. Fishing the Red Deer River and catching rockies has always been on my to do list and this year I expect to make the trip. Casting a nymph and nail rig has always been a sure-fire way to get rockies to bite.

For those that like to go big, I can’t think of a better time than right now to hit the deep holes for lake sturgeon. They’re congregating in these holes in preparation for the coming wintering. To catch them attach a pyramid weight, tie on a size 1 or so hook and put on a couple full sized dew worms. Sink the bait to the bottom and wait for the bite. Just be ready for something big. The last three sturgeon I picked up in the North Saskatchewan were 38, 44 and 54 inches respectively. 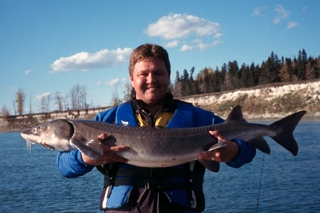 The rivers come alive in the fall and with water clarity near it’s best, it’s a good time to get out and enjoy the fishing.