Fighting Fish on a Fly Rod

One of the hardest things for new fly fishers to learn, once they have gained casting skills, is how to fight and land fish once they’ve hooked them. There are a few things that the angler can do that will greatly reduce the number of times that the big one gets away.

Line control is one of the most important skills that the new fly fisher must learn. As soon as the cast is delivered the fly line should be transferred underneath the index finger of the angler’s rod hand. Any excess slack can then be stripped in from behind the rod hand so that when a fish strikes the line is clamped between the finger and the rod allowing for a solid hook set. At this point the angler can exert pressure to strip in smaller fish or allow the line to pull out under control until on the reel for larger ones. Once a larger fish is on the reel the line must be kept tight at all times. A slack line can allow the hook to fall free from the fishes mouth, especially in this day of barbless flies. Let the fish run when he wants to, keeping enough pressure on him to tire him, but not enough to break your tippet. Make sure your drag is set properly before casting so that you don’t have to fumble with it during the fight.

One of the quickest ways to tire a fish during the fight is to apply side pressure. Fish swim in a side to side motion (viewed from above they become S shaped) when they are fighting. If you apply upwards pressure you are doing very little to tire them, side pressure works much quicker. If you want a demonstration of this have a friend hold the rod while you hold the end of the line to imitate the fighting fish. Move your hand in a side to side motion while your friend applies upward pressure and then have him drop the rod to the side. You immediately feel much more tension than from the upright position.

The final tip I have is to try to keep the fish beside you or upstream of you. This, however, is easier said than done in many cases. If a fish gets downstream of you the chances of the hook coming out or the breaking off increases greatly. He has the current in his favor and the line direction is pulling the fly out of his mouth. Once the fish is tired you should be able to get it’s head up out of the water and slide him, head first, into your landing net.
Try these tips out next time you hook up and hopefully they will help you net the big one! 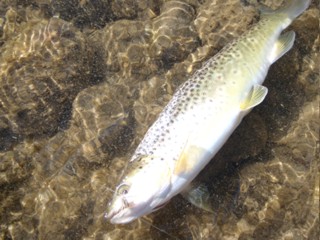