Catfish on the Fly 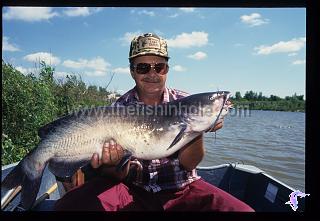 Recently, fly fishermen have discovered that channel cats are not only catchable on conventional fly tackle, but put up a whale of a fight when hooked. Two approaches prevail. The first is to fish Clouser-style flies on a hi-speed sink-tip line. Cast up and across to give it plenty of time to sink, the streamer is then stripped back upstream. Locals advise that they have their best luck in the late afternoons and evenings. For the truly adventurous, dry flies are becoming increasingly popular. The Red sees some summer hatches of large, pale mayflies that come off at night. Under the protective cover of darkness, cats will fin in the current, snout just breaking the water as they pick off the duns drifting down in the surface film. A number 8 or 10 White Wulff or similar pattern can give a fly angler the thrill of a lifetime as he battles these great fish in the dark.