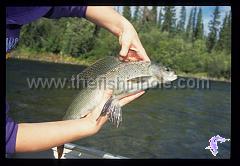 For those who’ve yet to fish for grayling, the recipe to success is relatively straightforward. For anglers with spinning gear, a light or ultralight rod spooled with six-pound test is ideal, although you have to be prepared to lose the occasional lure. You may even lose occasional grayling, when one of the lake trout that often share their waters decides it likes what you’re offering. Small spinners, including those by Mepps or Panther Martin are favourite lures, though small spoons and jigs have taken more than their fare share of grayling over the years. I can’t recommend a specific colour or two as being any better than the rest, though I’ve tended to enjoy great success with spinner blades in gold, yellow and black.

Another alternative for the hardware fisherman is to use a casting bubble above a fly. This allows the non-fly caster to enjoy the same visual thrill of a fish smashing a bait on the surface that fly anglers live for.

For the fly fisherman, the ideal rig is a four- or five-weight rod, though I’ve used six- and even seven-weight gear when northern winds are blowing, as they often seem to do. I prefer to fish dry flies whenever possible, and grayling are generally amenable to a well-presented caddis or mayfly imitation in sizes 10 - 14, particularly in stream habitats. My favourites include the elk hair caddis, Goddard caddis, humpies in red or black, Tom Thumbs, stimulators, and Adams’. The black gnat, though technically not a dry fly in the truest sense, has long-earned a deserved reputation as a favourite of grayling fishermen and should not be ignored. In lakes, or when they’re not rising in flowing water, I’ll often turn to nymphs such as the gold-ribbed hare’s ear, Prince’s, or San Juan worm, or even a small wooly bugger or zonker streamer pattern.

In rivers, look for grayling at the heads or tails of pools, in eddies, riffles or through slicks. It’s not unusual in the gin-clear waters they prefer to have the opportunity to watch them rise from their lie on the streambed or from behind a rock and take your offering. What is difficult, however, is resisting the urge to set your hook before a fish has actually taken your fly. When fishing lakes, search around rocky shorelines, where grayling will congregate in water that is typically less than 12 feet deep. Remember, arctic grayling forage naturally on a predominantly insect-based forage, so microhabitats productive for invertebrates will usually attract these fish.

Grayling are a gregarious species by nature, so where and when you catch one fish, it’s unusual to not find more. I’ve taken as many as a dozen grayling from a single pool on more than one occasion.

Though not big, grayling are scrappy fighters, and tussles usually feature modest aerial acrobatics as they attempt to shake your hook. They are a rather delicate fish where handling is concerned however, bleeding easily, so make every effort to be gentle when removing your hook. This can be a considerable challenge at times, as few fish wriggle and squirm in the hand as profusely as do grayling.