For those who prefer to fly fish for stream trout, here’s a list of the five flies I always carry. If allowed more than one size, I’d be comfortable on virtually any trout stream with this selection.

This fly’s effectiveness lies in its ability to replicate a wide variety of natural insects, including stoneflies, caddisflies and grasshoppers. Don’t leave home without a selection in sizes 4 – 14, with orange, yellow and green most effective.

The Adams is an attractor pattern that flat out looks “buggy”, though I suppose it most closely resembles a mayfly. It’s the searching pattern many experienced fly fishermen use first. Fish it in sizes from 10 – 20. A variant of this fly, the Bastard Adams, has white wings, making it easier to see on the water for guys like me whose eyesight isn’t what it once was.

Very much resembling the wire worm used by ice fishermen, the San Juan Worm remains a favourite trout nymph, especially on Alberta’s two blue-ribbon rivers, the Bow and the Crowsnest. Fished under a strike indicator, under a dry fly, or in tandem with another nymph, the “worm” is a consistent fish producer. 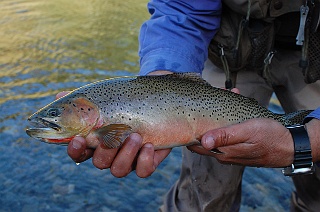 When we remember that trout feed 80% of the time subsurface, it’s not surprising that nymph patterns are so important. The Prince is a standard on trout streams, though if it is intended to represent a specific insect, I have no idea what that bug might be. Like many others have found, I just know it catches fish.

Streamers are trout flies “super-sized” to represent minnows, leeches and other larger prey items, and the Wooly Bugger is the acknowledged patriarch of streamer patterns. Generally fished downstream and across, the Bugger can trigger strikes on a tight line swing, on the dead drift, or when retrieved. Sizes 2 – 10 are most popular, with black, brown and olive colours prevailing. Don’t be shy about fishing them for walleye or pike, either.

(4) The People’s Fish of Summer

(8) Turning a Water Wolf into a Pussy Cat

(12) Tips and Tricks For Catching Catfish

(24) Getting into Fly Tying

(27) Taking out the little ones

(35) What are your boating needs

(36) Keeping It All Together

(48) The JawJacker - A fish catching machine

(56) What is that Shiny Silver Fish

(70) Survival Strategies For The Silly Season

(80) Trophies Are In The Eye Of The Beholder

(97) Netting and Landing Your Fish

(127) Fishing Tips and Facts for Sturgeon

(138) Tips For Dealing With Biting Bass

(144) Tackling Whites Through the Ice

(149) Tips and Tackle for the High Country

(162) The Sinker and Floating Plug

(171) Reading Your Waters Before You Cast

(172) Setting Up Your Bait Casting Reel

(191) A Simple Approach to Ice Fishing

(193) Gearing up for Fall Whitefish

(195) Bottom Bounce Your Way to Success

(197) Consider the Spawn and Water Temperature for Early Season Fish

(199) Tricks to Improve Your Ice Fishing

(202) All I Want for Christmas: Fishing Gift Ideas

(207) Great and Affordable Fishing on the West Coast

(211) Ice Fishing for Pike and Walleye

(214) Catching Rainbows through the Ice

(217) Getting the Most out of Your Fly Fishing Set Up

(223) Keeping Your Head Above Water