In the feature article I was talking extensively about my quest to unlock the secrets to Gull Lake’s winter whitefish, but thankfully, whites aren’t the only fish in many of our lakes. Where there are whites, there are often perch, pike, and in some places, walleye. So it stands to reason that I can double my fishing effort by fishing for more than one fish species, so that’s exactly what I do. Where I fish in Alberta we are allowed to ice fish with two lines, so I’ll jig for whites with one line and use the other line as a set line to target something else. 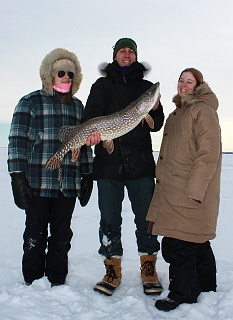 Whites aren’t the only fish in many of our lakes

My favourite one-two combo is to chase pike and whitefish at the same time. I’ll sit in a tent and work wireworms or small flies for whites, while nearby I’ll put out a tip up with an anchovy on it and fish for pike. Like the whites, pike prefer the weed edges, so that’s where I set my bait. Beyond that, I’ll also be prepared for any opportunistic perch when I’m looking down the hole fishing for whitefish. I always have a small bag of maggots handy and if a perch shows itself, I’ll quickly bring up the wireworm, tip it with a maggot or two and send it back down. More times than not I’ll catch the perch. Sometimes the perch do all the work for me and, believe it or not, on more than a few occasions I’ve had bigger perch swallow the anchovy set on the tip up. 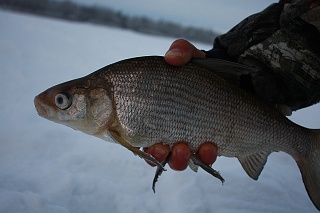 As for pike, how can I tell if a pike has taken the anchovy on the tip up while I’m sitting inside a tent looking down a hole for whitefish? The answer is to attach a bell to the flag part of the tip up and the moment that springs to life, the bell will jingle and I’m off to the races. So there you have it, use a couple different presentations to target different fish and give yourself double the chances at fishing fun.