When confronted with the fly fishing dilemma where fish don’t appear to be actively feeding, making matching food with a lifelike imitation challenging, nothing beats a Woolly Bugger. Buggers come in a myriad of colours to effectively represent everything from a large nymph, a baitfish or just an annoying something that causes trout to strike wantonly and aggressively. There’s something about the fly’s marabou feather tail, especially when tied with a bead or cone head causing the Bugger to undulate attractively in the current, which fish at times find irresistible. 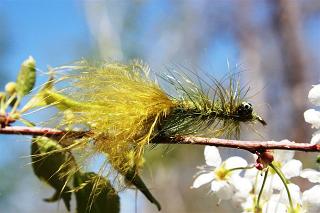 Buggers can either be fished on the swing – where the fly is cast diagonally across the current then allowed to come around with the current, or returned to the angler with a strip-strip-pause retrieve. Strikes as often do not occur during the pause when the Bugger dives seductively. Favorite Alberta colours are black, olive, tobacco brown or gray, especially when dressed up with a few strands of flash. The fly is also very easy to tie and has now become the initiation fly for introducing entry level fly tiers to the wonderful world of fly dressing.