When a "hatch" occurs on a trout stream that brings the water alive with feeding fish, and fly anglers are in their glory. Sometimes though these hatches can be too heavy and it makes it difficult to get a fish to take your imitation. After all, with hundreds of natural insects to feed on why would a fish eat your imitation. There is also the problem of getting your fly exactly into the fishes feeding lane. Trout feeding on a heavy hatch often sit right near the surface and will not move far to take an insect, they let them come to them. Another problem can be distinguishing between your fly and the hundreds of naturals on the water, which makes it difficult not only to tell if you're getting a good drift, but also if a fish has taken YOUR fly. 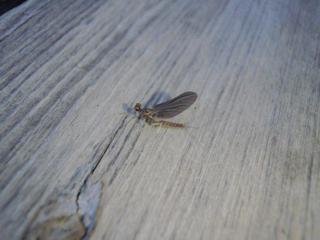 Try adding a size 20 Mayfly to the mix

A trick I learned years ago that has served me well is to "unmatch" the hatch. As I recall Alberta fly guru Jim McLennan divulged this trick in one of his early books. Jim suggested using a #16 Red Ant during the often frustrating Trico hatches on the Bow, instead adding your size 20 mayfly to the mix, you fish a much larger and different insect imitation. I have used this and various other substitutions over the years, and I'm starting to rely on them more as I get older! Terrestrial patterns such as ants, beetles and grasshoppers are always good flies to use as substitute as the fish are used to seeing them and will usually take a break from the hatch and eat them.