Basic Atlantic salmon fishing techniques are pretty universal wherever you fish for them. They’re typically found holding in pools and deep runs as they migrate upriver. It’s not uncommon to see them in their preferred lies, but getting them to take is another matter altogether. As a rule they don’t actively feed in rivers and why they ever do strike a fly is subject to much debate – it could be aggression, territorialism, annoyance or any combination. 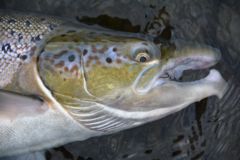 The hooked jaw, or "kype", of a pre-spawn male Atlantic salmon

Anglers generally work these pools from the top down, casting surprisingly small flies across and down, swinging them in the current before strip-retrieving. While there is a great history of handsomely-tied feather-wing salmon flies, these are seldom fished today, there have been many simpler flies developed and tied that produce well in almost any salmon river.