Western Canadian fly fishers come from the practice-makes-perfect school of angling and believe that if they take a number of casts, sooner or later they will get it right. However, when they are on a winter angling vacation and stand on the casting deck of a flats skiff for the first time, they encounter a clash of cultures that can be both frustrating and ego deflating. Welcome to the world of "shot" fishing where the angler stands alert, inactive and ready - often for long stretches - until the guide on the poling platform gives his order to fire. Whereupon the sport must deliver a crab or shrimp imitation precisely on the nose of an advancing redfish or bonefish, which, chances are good he doesn't even see when the order is given. 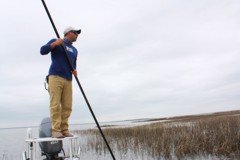 Flyfishing from a flats skiff involves an attitude adjustment

To lift the fly, double-haul one back cast and land the lure in the general vicinity the guide wants it - often into a soul-destroying wind - can be a real test of character. That is not to mention the tension this can create in the boat after one too many wonky casts. There are, however, ways to avoid some of this anxiety. The most obvious, of course, is to practice flats casting at home and it’s not possible to replicate the conditions exactly. So focus on a fast, smooth delivery. Secondly, when on the boat be aware at all times of where the slack line on the deck is as trying to shoot 20 meters of line when you are stepping on it is mission impossible. The third is to conduct a pre-cast routine where your fly, shooting line and rod preparation are all in sync to get the cast off as efficiently as possible. Sure, there are going to be blown casts and screw-ups. Nobody is expected to be perfect if they only do it once or twice a year while on a fun-in-the-sun vacation. Preparation and anticipation are the key to a successful "shot", bring fish to the boat makes for a happy guide.