Many anglers make the mistake of wading right out to within casting distance of the "juicy" part of the water when they first arrive at the stream or river. This is often a big mistake as any trout that are in the shallows will be spooked. I always approach the stream bank cautiously and try to make a few casts along the shore before I get into the water. It’s surprising how often trout, even big trout, can be found close to shore, especially early in the morning before they have been spooked by other anglers. Trout will often move into the shallows under the protective cover of darkness and remain there until they get spooked out into the safety of deeper water or until whatever they are eating disappears. 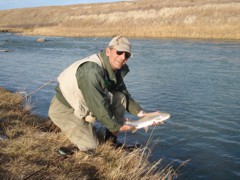 This fish was caught a foot off the bank

During the warmer months of the year they will also hold closer to the bank looking for terrestrials. Ants, beetles and especially grasshoppers are more likely to be found closer to the edges and the fish get used to feeding in those locations. Once you have made a cast or two along the shore slowly fish your way out deeper, covering the various water depths as you go. One of my favourite sayings from a guide friend of mine is "I hope he fished his way out to where he is because he’s standing where he should be fishing!" The "sweet" spot you are heading to isn’t going anywhere so slow down and perhaps you’ll pick up a fish or two on your way out. Trout in the shallows are there for one reason only and that is to feed, so with a little stealth, and a little luck, you might be able to hook a fish before you’ve even gotten your feet wet.