The Right Tool For The Job

For some reason there has been a bit of a fad in fly fishing lately to target large fish on very light tackle. While I like the fight of a big fish as much as the next guy I don’t think it’s fair to the fish if you do not have the ability to land them quickly so that they can be released to fight another day. Fish that fight for a long period of time tend to build up lactic acid that could very well end up killing them. Even though they swim away fine, when released if they have been overly stressed there is a good chance they will not recover. 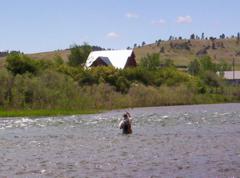 I reccomend a six to eight weight rod for larger rivers

When fishing larger rivers I usually use an eight weight rod and would recommend nothing lighter than a six weight. The use of a heavier rod allows you to use larger flies, such as sculpin and minnow patterns or fish two or three nymph rigs. Heavier rods will also let you cover much more water with your cast allowing you to get your fly into more spots than lighter tackle would. The bottom line though, is if you catch a large trout in fast current the rod will let you land the fish much quicker, increasing the odds of his survival after release. So the next time you head out seeking big fish consider using the right rod for the situation.