It's A Pink Year

On odd numbered years such as this year, 2017, Southern BC rivers and streams fill to capacity with spawning pink salmon. They start showing up around mid-August, with their numbers increasing dramatically to the end of August and into the first couple weeks of September. These salmon are not shy. You will see tremendous numbers of them stacked up everywhere you can imagine. They will bite a number of small spoons and spinners but the absolute best lure is a red/pink yarn fly shaped like an egg. This is drifted along bottom using a sinker and a bobber on the surface to indicate bites. 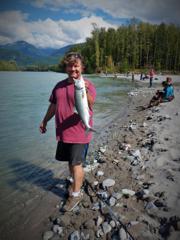 My reward from fishing a yarn fly under a float

I have family near Squamish, BC, so the Fraser River, the Squamish River, and the Vedder Rivers are all excellent destinations to hunt pinks. If the pinks are in you can’t miss them. During the last pink run in 2015 our friends Wayne and Leonie joined Melanie and I to make a trip to the Vedder. In the clear water we could see hundreds of pinks schooled up together, in pretty much every pool we looked at. It was an inspiring sight. With thoughts of all those pinks on our mind, Wayne and I decided to try the Squamish River, which for us was a much closer drive. At the Squamish we saw a bunch of anglers drifting bobbers and yarn flies and at any one time, two or three people would be fighting fish. 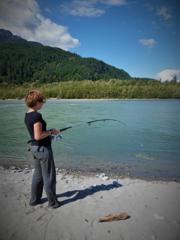 Pink salmon fishing is fun for the whole family

We joined the group and did exactly as they did. No sooner had we started drifting our yarn flies when we started hooking up. Over the course of an afternoon we must have landed several dozen pinks. The fishing was incredible. Toward the end of the day we kept a couple mint silver pink salmon each and had an outstanding barbecue fit for a king. That’s pink salmon fishing for you. Fast action, lots of catching, and some good eats. It’s a low investment, quality fishing experience. So if you find yourself planning a trip to southern BC in the fall, make some time to hit the local rivers and cash in on the outstanding action, courtesy of the pinks. 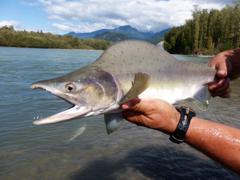