In the brave new world of western walleye angling harvest is either severely restricted to a fish or two a day, tag draws or even outright bans. All in the honourable cause of catching fish rather than decimating populations. But even with retention tightly regulated catch and release mortality does occur. To avoid undue damage to fish being released most anglers either pinch or break-off the barbs of their hooks with pliers. 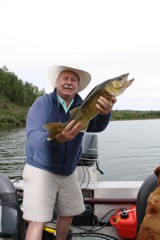 Making release less stressful for the walleye and causing minimal harm to their mouths and gills. For a lure angler this is not an issue. But when fishing with a frozen shiner minnow threaded on a lead-head jig it can become problematic without anything to restrict the bait from slipping off the hook. A stopper of either a section of wide elastic band or a piece of soft plastic jig tail will hold the minnow in place while casting and jigging. (Bring plenty so they can be replaced after becoming worn.) And eradicate that frustrating feeling of reeling in to discover nothing on your line but a bare hook.