One of the best casts an angler can learn is the roll cast. The biggest advantage to this cast is that line never goes behind the caster, making it the ideal cast for tight spots. If you have an obstruction behind you like bushes, trees or a rock wall etc. you can still get your fly out into the water. The roll cast can also be used as a method of picking up your line off of the water to begin a normal cast, this is called a roll cast pick up. It will get your line in the air without near as much effort as a standard pick up and is especially useful when the current is bringing your line back to you quite rapidly. It is also a very effective cast for small streams as a roll cast is often all you need to get your fly where you need it. This eliminates false casting which will often spook fish. 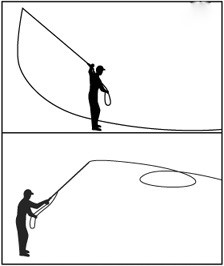 The roll cast is made by drawing your rod upright over your shoulder to approximately the one o’clock position and then bringing the tip down quickly in a "wood chopping" type motion. The friction of the line on the water is all that is needed to load the rod. When done correctly the line should just roll out, hence the name. The roll cast can be done over either shoulder, if there is a wind you will you will want to use your downwind shoulder to avoid hooking yourself. If you don’t know how to roll cast you should really learn, and practice it. Doing the cast properly on grass is difficult because there isn’t as much friction as on water so practicing at a local pond is always a good idea.