The JawJacker - A fish catching machine

One of the greatest tools to advance the catch rate of ice fishermen and women has been the invention of the JawJacker. The JawJacker is basically a well thought out platform that holds your ice rod in a fully bent, ‘loaded’, position while it fishes. There is a tripping mechanism that the line rests in, and when triggered by a bite, the rod snaps skyward, effectively setting the hook. That means that when you put a rod into the JawJacker and set it, every bite is met with a hookset, every single time. And all these hooksets add up to many more fish hooked and many more fish caught. For the past several years I have used the JawJacker extensively and I would say it outfishes anglers who hand jig by a measure of 3:1. 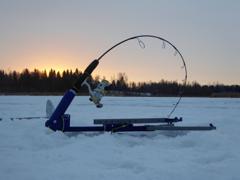 The JawJacker is an outstanding fish catcher.

Why is it that the JawJacker is so effective? It could be that a set Jawjacker is quieter than a person standing and shifting around on the ice. It could be that the absolute still presentation of a Jawjacker will rarely spook a trout, where sometimes a jigging presentation does. Jigging can be an effective presentation, but a lot of anglers overdo their jigging action, more often spooking fish rather than getting them to bite. 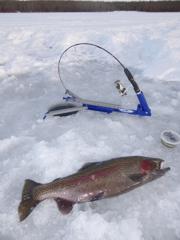 Another chunky rainbow taken by the JawJacker.

That said, the JawJacker now has the option to purchase an add-on feature that allows for subtle, mechanical jigging. It is quite new to the market so I have not given it a try, but the original JawJackers I own, a dozen or more, I’ve used them super successfully for years. They are a proven fish catcher, which is a wonderful thing, and worthwhile addition to your ice fishing gear.