When fishing streamers, you don’t require a tapered leader. Fish are not generally line shy underwater, so a typical streamer leader is three or four feet of standard monofilament-the same stuff you use on your spinning reels. Fish often strike viciously when hitting a streamer, so use stout line; 3X in smaller streams, 2X or larger in big rivers and lakes where the fish can be significantly larger. 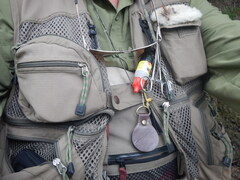 A leader straightener erases a leader’s "memory" from having been coiled in the packaging.